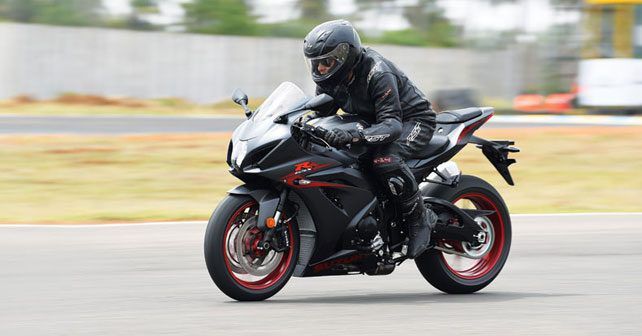 Suzuki unleashes the all-new 6th generation GSX-R1000, which comes loaded with 200bhp of raw power. We head to the Kari Motor Speedway to experience the full thrust of both the GSX-R1000 and the more race-focussed GSX-R1000R.

Working on Saturdays is punishing enough. And when you have to catch a flight at 6:35am from Delhi to Coimbatore, only to return the same evening, gruelling is the word you’re looking for – isn’t it? But, surprisingly, that was not the case on this occasion. You see, I was so excited to go to Coimbatore that I could barely catch a wink the previous night. As for sacrificing my weekend, I couldn’t really complain as this was going to be my best working Saturday in a long time. Why? You may ask. Well, simple really – the opportunity to ride Suzuki’s new GSX-R1000, and the more race-focused GSX-R1000R at the Kari Motor Speedway.

I know what you’re going to say – riding the 200bhp (199.2bhp actually, but then who’s counting) Suzuki twins on a tight 2.1-kilometre Kari track could actually end up being a bit of a tease since we won’t be able to experience the GSX-R’s true capability. However, I would say that the track could show us how versatile these two litre-class bikes truly are. 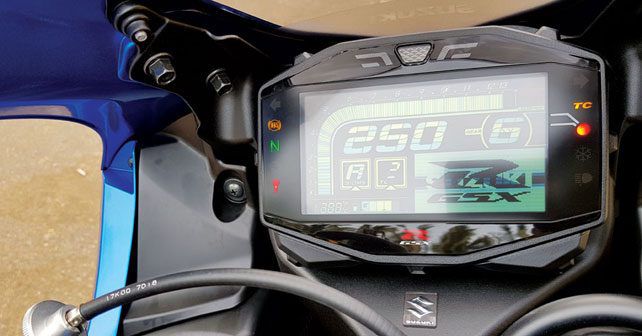 When I first saw the dynamic duo parked at the garage, the GSX-R1000 in a menacing matte black and the GSX-R1000R in traditional Suzuki Triton Blue, my cautious mind told me to start with the R1000 to get a feel for both the bike and the track. But, I quickly set that thought aside and listened to my heart – so I opted for the R1000R instead. Just to keep things in perspective, both bikes are powered by the same 999.8cc engine, with an identical output of 199.2bhp at 13,200rpm and 117.6Nm of torque at 10,800rpm. So there is no slower version.

As I climbed onto the saddle, I quickly realised that Suzuki had retained the comfortable riding stance of the previous generation GSX-R – one facet that made it stand out from the crowd. It was great to see that the Japanese two-wheeler manufacturer didn’t go overly radical with the posture after increasing the bike’s power from 182bhp to 199.2bhp.

Time to fire up the 999.8cc powertrain and twist the throttle. Thanks to the perfectly mapped ride-by-wire system, its response was intuitive and precise. I decided to take it easy on my first lap, and took the first corner in third. To my surprise, the engine was as smooth and linear as ever. After becoming a bit more familiar with the bike, I decided to attack the bends, and, again to my surprise, the GSX-R1000R showcased its agile nature by easily letting me lean into corners and exit with ease – not to mention plenty of pace. Thanks to a narrower frame, this bike offered phenomenal control – especially at speed – which was quite confidence inspiring. If that wasn’t enough, the GSX-R1000R came with a state-of-the-art quick shift system that worked like a charm – as I was able to seamlessly upshift and downshift without the aid of the clutch or throttle. Though, what did distract me was the flickering of the traction control light at almost all the corners. But then, to be fair, the 10-level traction control was tuned to its highest nanny mode as the tyres were brand new and cold. 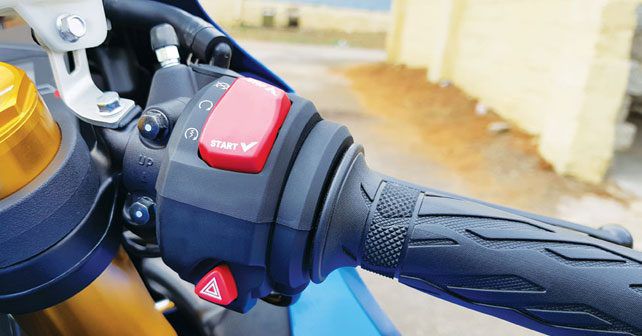 As I entered the last section of the Kari track, the GSX-R1000R was bombarded with loose gravel on an uneven stretch. But, with the Showa Balance Free suspension and cornering ABS, the GSX-R handled it incredibly well. Turning onto the straight, it was time to go ballistic – and the GSX-R1000R didn’t disappoint as it sprinted to 200km/h in a flash. To negotiate the first turn safely, I had no choice but to slam on the brakes. The front twin 320mm Brembo discs, along with a 220mm rear disc worked beautifully in tandem to ensure effective stopping capacity without ever letting you doubt its capabilities.

Now, what makes the new GSX-R a thoroughbred and a stand out machine is that it’s more than just a high revving machine. The motorcycle is very responsive and has a strong meaty punch in the low-to-mid range. But with the Variable Valve Timing (VVT) technology, taken from Suzuki’s MotoGP race bikes, once the GSX-R hits 10,000rpm, a seamless increase in high-rpm power can be felt without sacrificing on low to mid-range power.

It was now time to head back to the pit lane and ride the GSX-R1000 – the so-called base version. Now the two bikes are identical, except for the fact that the R-variant comes with launch control, a bi-directional quick shifter, and Showa Balance Free suspension with cornering ABS. The GSX-R1000 also pulled away quickly, but when we hit the bumpy corners of the Kari track, the bike exhibited a jarring, rough ride. I could see that this version lacked the smooth transition in turns that the R model provided. Apart from this, the GSX-R1000 didn’t let us down in any other department. 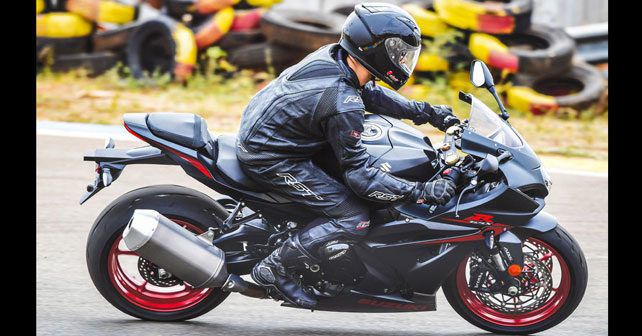 The good news is that Suzuki has finally entered the 200bhp club in the one-litre class with the all-new GSX-R range. Its greatest USP is that even though you can blitzkrieg the racetrack, it can easily be ridden in the city as well. The GSX-R duo are fully loaded with features, and provide three riding modes for different conditions and aggression. They are, undeniably, the most comfortable one-litre bikes on the market. Unfortunately, the GSX-R1000 and the GSX-R1000R are priced at RS.19 lakh and RS.22 lakh respectively (ex-showroom, Delhi), which means that they enter Aprilia RS4V range. That surely makes the Suzukis a hard sell. No doubt Suzuki will score higher in terms of reliability, but, let’s be honest, the RS4V is in a league of its own.

X-Factor: The GSX-R1000 and R1000R have a versatile 999.8cc engine. both models are excellent handlers and provide great control, although the ‘R’ is more focussed.