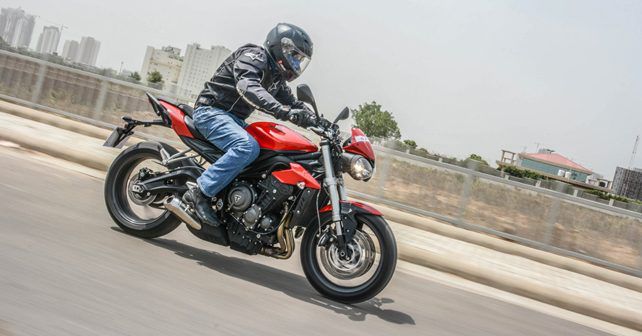 With a new 765cc motor, the new Street Triple S is faster than ever before. It’s packed with tech and priced well too. Is it finally time for you to go bug-eyed, then?

Every time I look at the Triumph Street Triple, my mind goes back to the year 2000 when I was introduced to the world of Triumph motorcycles – thanks to Mission Impossible 2. To be honest, at the time, I didn’t know much about the round-eyed monster Tom Cruise was riding. What I did know, however, was that the Speed Triple didn’t look like any other bike I’d seen before. In time, the Speed’s round headlights evolved and became more bug-eyed – for which it received a lot of criticism for some reason. Thankfully, the British motorcycle manufacturer stuck to its guns – and what you see here, revelling in its bug eyes, is the new 2017 Street Triple.

The Street Triple has been a big success story for Triumph globally, ever since its inception in 2007. I, personally, was quite fond of the older model – as it wasn’t as big and heavy as its bigger brother – the Speed – and this made it easier to ride in traffic. But, what the previous generation lacked was serious power – as the 675cc was quite sedate despite its 84bhp. The good news is that Triumph has addressed this issue, and the new 2017 Street Triple S is brimming with 111.5bhp – thanks to the Daytona’s 765cc 3-cylinder powertrain. 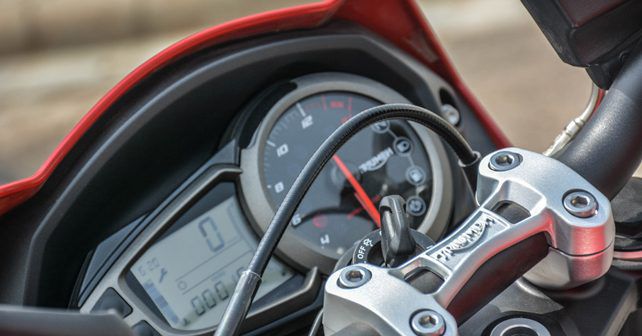 With the closing for the July edition of the magazine looming, we didn’t have much time to muck around. The sinful Street Triple S in Diablo Red was anxiously looking at me from behind its new LED headlamps. Before I sat on the saddle, I patted the Street’s 17.4-litre tank and whispered, “We’ll look out for each other. Okay!” I know it’s silly talking to a metal steed, but in the back of most riders’ minds there is a connection between man-and-machine. After all, respect is a two-way street – and it’s very important when you’re riding.

Time to find out how the new Street fares then. I fired up the engine, and the exhaust note exhaled a vague mechanical buzz. Without really thinking twice about the sound, I twisted the throttle, and the 765cc picked up speed in a very well-mannered fashion. Some may complain that it’s not instantaneous, but that’s not really a bad thing as it gives you total control – especially in start-stop traffic. But, sadly, the clutch feels heavy – which can be a nuisance in rush hour traffic. For better acceleration, Triumph has reworked the first to second gear ratio by making it shorter – and this was quite evident a I weaved past traffic courtesy of ample torque at low revs.Once we hit an open road, I decided to open up the throttle and stir a little dust behind me. At low rpm, the Street has a more measured approached – but the real fun kicks in when it enters the mid-range. The rev needle kept climbing, and, with the new motor, the Street didn’t gasp for breath like the older one used to.

Now the problem with most power packed motorcycles is that their suspension set up betrays them in India – and one is invariably forced to slow down, unless you want to bounce off the saddle and land on the tarmac. Well, this isn’t the case with the Street Triple S. I purposely rode it on broken roads, and not once did I feel that the bike would throw me off. Triumph has got the ride quality spot on by replacing the older Street Triple’s KYB-sourced 41mm upside down forks and a mono shock setup at the back with this new 41mm Showa upside down Separate Function Forks (SFF) and a Showa piggyback reservoir mono shock. Now, the suspension travel in front and at the rear remains the same – and, with a softer setup, it manages to carpet most potholes without breaking a sweat. 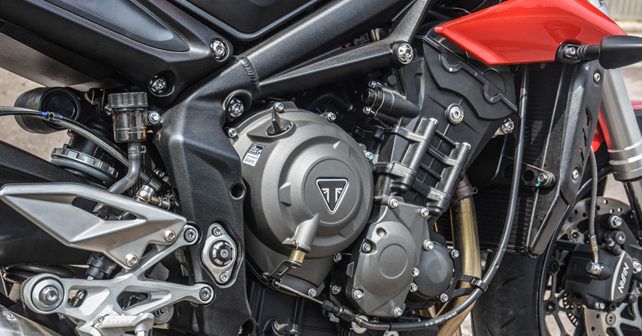 The older Street was a good handler, but the new one is even better. Even though it’s based on the same frame, it comes with a new gullwing rear swing arm that ensures greater stability at higher speeds. At the same time, it lets you take tight corners with ease, as the chassis is more precise. Some credit should also go to the Pirelli Diablo Rosso Corsa tyres, which stay glued to the tarmac and provide excellent grip and stability.

Now the Street Triple S is the base variant, but it’s fairly well equipped as it comes with a ride-by-wire throttle that ensures a sharper throttle response and offers two riding modes – Road and Rain. There is also switchable traction control and ABS.

So, at Rs.8.50 lakh, ex-showroom Delhi, does it justify its price tag? We certainly think so, as it’s loaded with state-of-the-art features like ride-by-wire, ABS and traction control. Apart from this, the suspension set up is ideal for our road conditions, the Pirelli tyres provide unbelievable grip and the Nissin two-piston sliding callipers on the front and a single 220mm fixed disc at the rear, with a Brembo single piston sliding calliper, result in brilliant stopping capabilities. With a slew of mid-range bikes entering the market, the Street certainly has its hands full, but with its superior build quality and reputation for reliability, Triumph certainly has a winner on its hands.

X-Factor: The Street Triple S is not only very engaging and a great handler, but it also has an excellent ride quality that allows hours of effortless cruising.