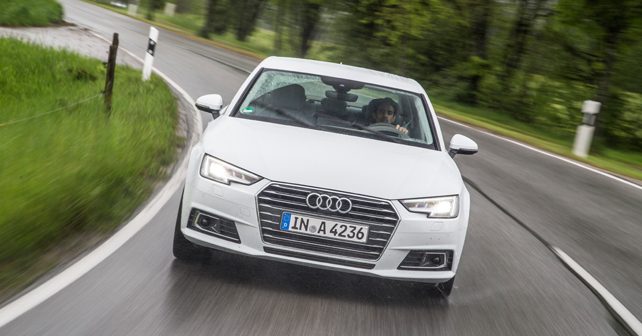 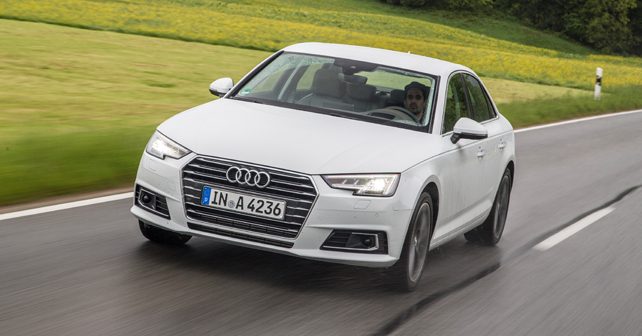 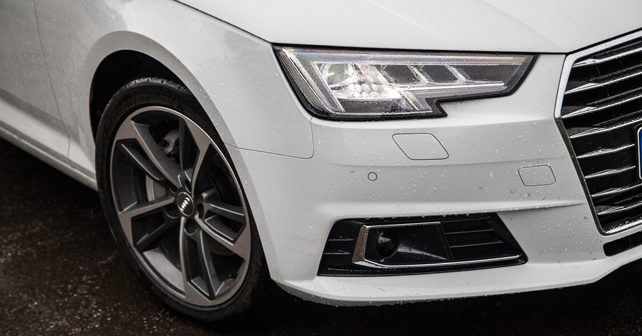 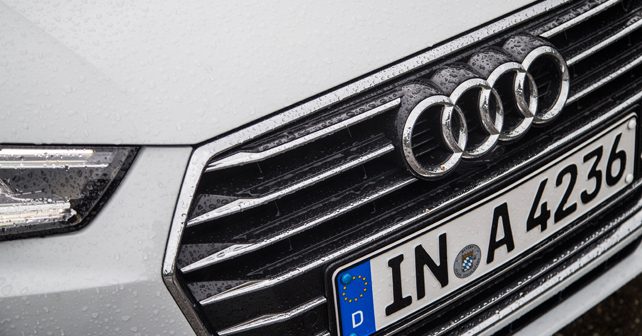 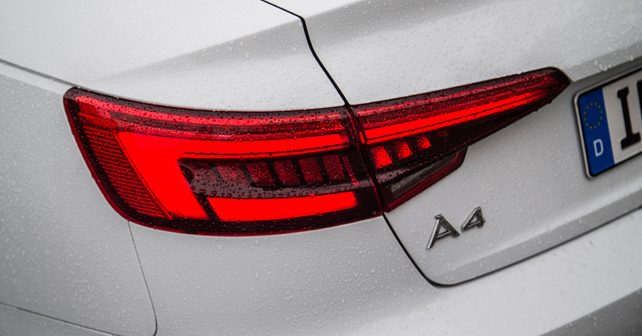 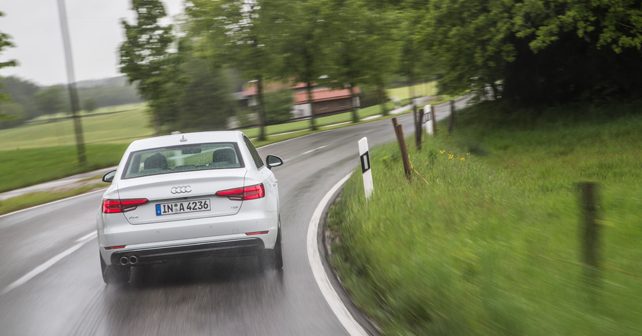 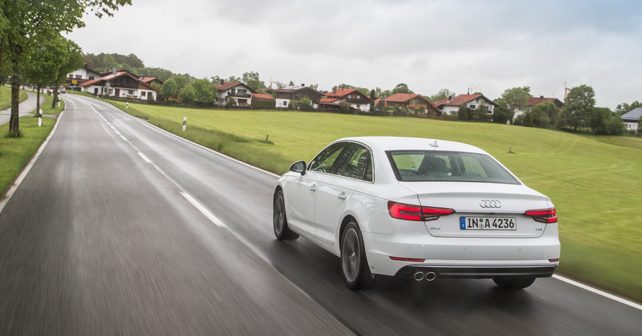 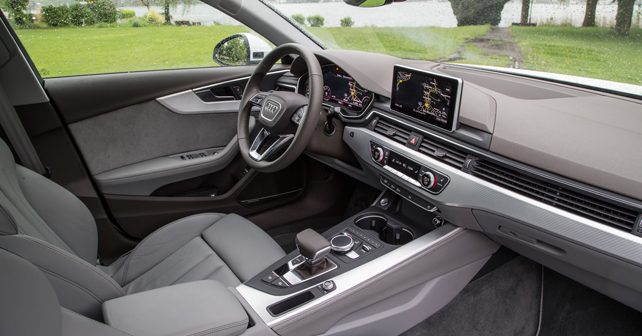 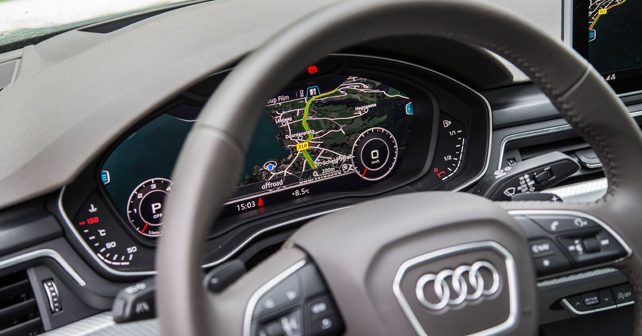 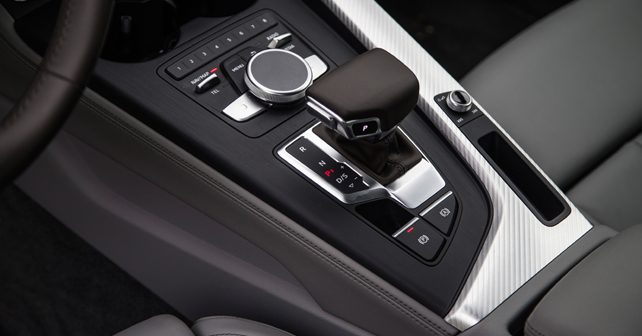 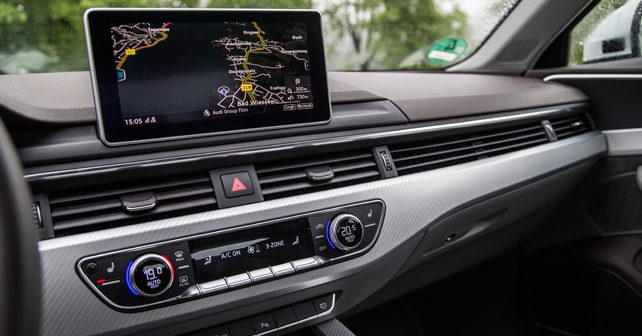 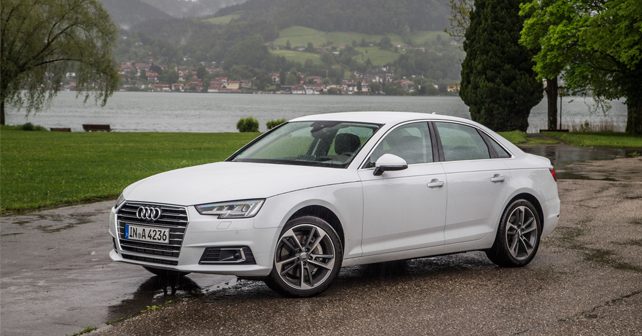 Cutting edge technology and class-leading comfort are just two of the attributes that the new A4 offers. But what does it feel like from behind the wheel – is it more premium sports sedan or attainable luxury car?

The king of premium sport sedans has always been the BMW 3 Series. It’s long provided a near perfect compromise between engaging driving dynamics and everyday usability – leaning just the right amount towards sport! But the current 3 is getting a little long in the tooth – despite a mid-cycle facelift recently – while the competition has been making massive strides.

The new C-Class from Mercedes-Benz was introduced in late 2014, and it completely blew the competition out of the water when it came to cabin design and quality. And it’s an S-Class clone on the outside too, which is no bad thing. Plus, of course, it’s much shaper than it’s ever been from behind the wheel. More recently, the Jaguar XE was introduced in India – and it’s sole objective was to dismount the 3 Series from its sport sedan pedestal. The Jag comes clothed in Ian Callum’s finest handiwork, and not only does it look good but is also incredibly sharp from the driver’s seat thanks to double wishbones taken from the F-Type sports car in front and a clever multi-link suspension set up in the rear. We drove the XE at the Buddh International Circuit recently, and came away increasingly concerned for the BWM’s crown. You see, while the BMW has been getting softer and more forgiving over the years, its competitors have been growing increasingly sharper and more rewarding from behind the wheel. They all seem to be gravitating towards a happy medium it seems.

So it was only natural to expect the new Audi A4 to have the same objective in mind – dismount the 3 Series by being more driver-focussed than ever before. But Audi clearly has other objectives in mind. Most likely buoyed by its success in China – and even India for that matter – Audi appears to be chasing leadership by providing cutting-edge technology, class-leading space and comfort, as well as quality levels that will completely reset the standard.

The A4 seems to have taken a lot of cues from the new Q7 – the single-frame hexagonal grille that’s far more pronounced, on either side of which are a pair of jagged-edge headlights that look almost weaponized. Of course, it gets Audi’s Matrix LED’s. To my eyes, it’s a good-looking car from the front. In profile, despite the pronounced shoulder line, it’s decidedly unfussy in true Audi fashion. Around back, its very similar to the outgoing car – which puts it at odds slightly with the more stylized front end. Overall, the design language is very clean, very Teutonic, and very modern – but not exactly emotive! And that sums up this car perfectly. It has a coefficient of drag of 0.23, which is just shy of the smaller Mercedes-Benz CLA – which, at 0.22, is the most aerodynamically efficient series production car in the world. This is important because the less drag that you have the more efficiently you’ll slice through the air – and save fuel while doing so.

But what really strikes you about the new A4 is just how much it seems to have grown over the previous generation – the benefits of which are felt as soon as step into the cabin. Again, much appears to be carried over from the larger Q7 – which is no bad thing. The horizontal slats in the dashboard really do give it a sense of space. The other sense that you get is that Audi has specified the material quality of even the tiniest component in the cabin to the very strictest levels of appearance, texture and tactile feedback. Even the C-Class pales in comparison when it comes to this level of detail and quality – and, in this company, at least on the inside, the XE simply doesn’t stand a chance.

Moreover, when it comes to cabin tech, the A4 simply leaves everything else for dead. The Virtual Cockpit – consisting of a 12.3-inch TFT screen that makes up the instrument cluster – is just as stunning as it is in the TT, Q7, and now also the face-lifted (and yet to be launched) A3. It really is astonishingly good – and this comes from a lover of a good set of analogue gauges. There are, of course, a range of driver assistance technologies (collision avoidance, active lane assist, blind spot warning, park assist, and the like) that won’t make it to India. But it’s the Audi connected technologies that really ought to make it into our market. Our test cars in Germany came with a SIM card built in, which gave us access to Google Earth images on both screens – one in the centre console and the other, more impressive, screen in the instrument cluster – plus live traffic, weather forecasts, and even Twitter updates.

What we will be getting in India when the car launches before the festive season this year, fortunately, is Apple CarPlay and Android Auto. The top-of-the-line models will also get an incredible Bang & Olusfen 3D surround sound system with 19 speakers, transmitting 755-watts through a 6-channel amplifier. All cars will get Audi’s new, and quite impressive, MMI (Multi-Media Interface) and Audi Drive Select – which lets you choose between different driving modes.

The A4 has lost about 120 kilos thanks to a diet that’s taken a few pounds out of virtually every single component in the car – leading to a fairly substantial weight savings – and that means it does feel sharper and more precise on the road. Unfortunately, we tested the new A4 in incessant rain outside Munich so we couldn’t really push the car to gauge absolute grip levels – suffice to say that it’s got excellent driving dynamics and feels extremely surefooted, even in the wet. But it wasn’t just the weather that prevented us from getting a real sense of the driving experience – it had more to do with the fact that the A4 prefers to keep the driver at an arm’s length. The words engaging and involving are not the ones you’d use to describe the driving experience. The steering is sharp and precise, but decidedly detached.

The two cars that we sampled were the 2.0 TDI and 3.0 TDI. The 2.0 is, of course, the mainstay of our market and – in 190 horsepower trim – it feels perfectly capable powering the new A4 to 100km/h in under 8 seconds (7.7 to be precise). The other engine that we sampled was the 3.0 litre V6 diesel that’s not only hugely powerful, but also incredibly refined and silent – so-much-so that it’s impossible to tell that it’s a diesel. In fact, while Audi has done an excellent job in eliminating turbo lag in the 2.0 TDI and making power delivery linear across the rev range, I do wish they had done a little more to make the 2.0 litre diesel motor sound a little nicer under acceleration. On the highway, though, the A4 is incredibly silent and comfortable.

We also sampled both the six-speed manual as well as the 7-speed dual-clutch automatic. And, as much as I enjoy driving a car with a manual gearbox, I have to say that it’s immediately noticeable that the majority of development time over the last several years has gone drastically in favour of the dual-clutch auto at the expense of the manual. While the clutch is light and the gear lever of the manual easy to work, the seven-speed dual clutch is just so impressive in its execution that it makes little sense to opt for the more traditional gearbox – especially in our traffic conditions. Plus, it’s hard to put into words how much of a leap this dual-clutch is over the CVT of the previous generation – it simply transforms the driving experience.

To sum up, you would refer to this driving experience as being very mature. This A4 really does seem to have grown up. If its engagement from behind the wheel that you want, you’ll have to wait for the S4. But if it’s a car that offers class-leading comfort and cutting-edge technology that you’re after – and one that you can enjoy driving on occasion, as well as be chauffeured around in when you’d rather be in the back seat – then this is the car for you. The A4 has grown out of its desire to be a boy racer and has decided instead to emulate its bigger brother, the A6 – something that it does very well indeed. For comfort and cabin tech, the next generation BMW 3 Series clearly has its work cut out for it! Luckily it has a couple of years to work out the finer details…