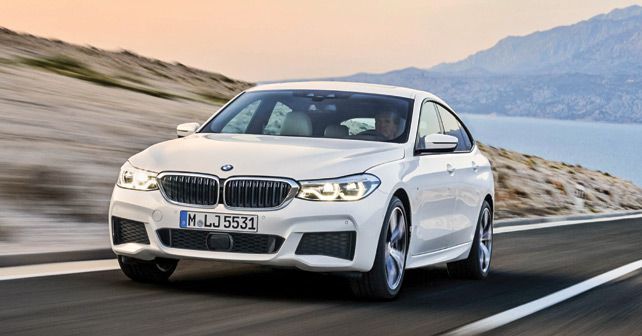 Mercedes-Benz pulled off a bit of a coup when it launched the extended-wheelbase E-Class in India earlier this year, but it seems that this comfort and class battle is just warming up. BMW recently launched the brand new 5 Series, and is quickly following it up with this – the new 6 GT.

In the world of four-door coupes, where choices are limited, the BMW 6 Series Gran Coupe stood out for its sinuous lines and low-slung coupe design – which gave it a special charm and individuality that also helped create a segment of its own. There was an elegant open-top version too. But now the boffins at BMW have come up with a fresh take in the form of the 6 GT – a more elegant and plusher alternative to the ungainly 5 GT.

GT lines
The 6 GT seems to have been born out of the need for BMW to stay in the game, because large GTs are still in vogue – even in India. But, while the practicality of a hatch-style boot has its appeal, today’s younger luxury car buyers also seek a design aesthetic that matches their outlook. And the 6 GT manages to bring this mix of attributes to the category. Its design is pretty true to classic GT roots, with a sharply rising windscreen that elegantly slopes towards the rear roofline and ends in a stubby boot. But, at over five metres in length, its proportions instantly strike you. In fact, the 6 GT is built on the same platform that’s shared between the new BMW 5 and 7 Series luxury sedans.

So, the 6 GT is a fairly large car that bears a clear resemblance to the current 6 Series Gran Coupe’s design. Its four full-size doors will certainly be appreciated by Indian buyers, as will the easy access to the cabin with its relatively tall stance provides. Better still, the standard air suspension will allow the 6 GT to be raised by another 20mm up to speeds of 40km/h. This will help greatly on our roads.

When you view the new 6 GT, it does look as though it’ll be a heavy car. But BMW officials who were present during the test drive in Lisbon said that the new model is 150kgs lighter than its predecessor. A part of this saving has come from the increased use of aluminium and high strength steel in the body. The elimination of the split tailgate further added to the weight savings.

Upgraded luxury
Step into the 6 GT and the cabin immediately feels luxurious, with a combination of materials. The layout of the driver-oriented cockpit is very familiar. Though several elements feel familiar, they have been clothed in newer, upgraded materials – like the matt, open pore wood inserts. The leather-clad seats in the 640i we were driving were huge, extremely comfy and offered a number of adjustments for finding the right position. But, the driver’s seat, even at the lowest position, did seem to be set higher than in the 5 GT. That said, there’s a lot of shoulder and legroom – plus, headroom at the rear is more than adequate despite the sloping roofline.

Hexagonal design elements dominate the dashboard and central console. The dark brown and beige colour theme works well to elevate the cabin. There are a lot of new features and high-tech systems that have percolated down to the 6 GT from the BMW flagship, the current 7 Series. The 640i gets digital instruments, an 8-inch touchscreen centre-mounted infotainment system that now offers gesture controls, and a Bowers & Wilkins entertainment system. There’s also a lot of other tech on offer in the 6 GT, such as surround view cameras, auto lane keeping assistance and remote parking. 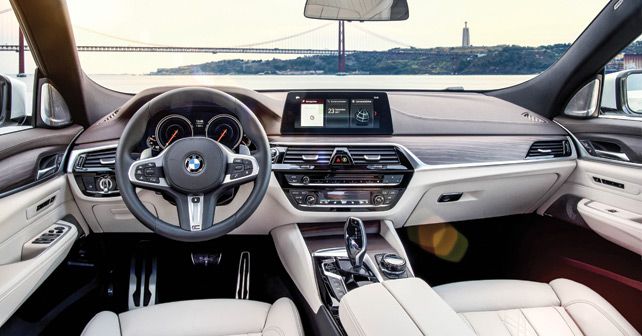 Six-cylinder magic
During this test drive, the only 6 GT variant on offer was the 640i M-Sport. This is one of the engines being offered in the new 5 Series currently available in India. And if BMW wanted to impress motoring journalists from around the world who landed in Portugal to try out the new 6 GT, they certainly had the right drivetrain
on offer.

This M-Sport 6 GT features a 6-cylinder petrol engine that generates 335bhp of peak power and 450Nm of torque. This is one refined, buttery smooth mill, which is so quiet that passengers will be isolated from much of the buzz under the bonnet. The engine is paired with an 8-speed ZF automatic transmission, and does the 0-100km/h run in a claimed 5.3 seconds. 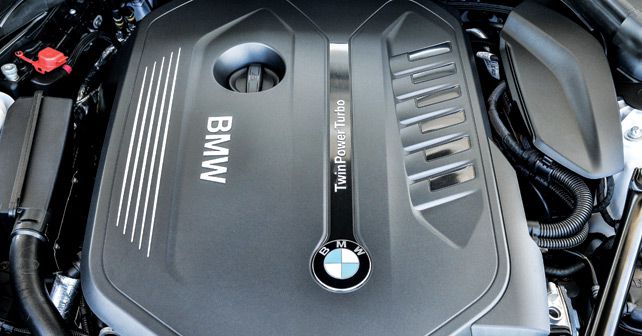 Power delivery in the 640i is linear, and there’s a lot of torque available on demand – with a strong mid-range. Tapping the throttle with the needle positioned anywhere within the 1,000rpm to 7,000rpm range propels the 640i forward with great urgency. In Sport mode, the 6 GT is even more agile, with the 8-speed ‘box holding gears longer and doing quick double downshifts when needed. The big change in the new 6 GT is in the areas of suspension and steering. This new GT is so pliant that it’s almost wallowy. It almost feels like the suspension tuners from Rolls-Royce crossed over by mistake and got their hands on this Beemer. In Comfort Plus mode, the 6 GT feels like a boat gliding over potholes and bad roads, without a hint of that disturbance coming into the cabin. The steering is also lighter, though not lacking in precision. The suspension and steering feel get a little firmer in Comfort, and the closest it gets to that familiar, rigid BMW suspension and heavy steering feel is only in Sport mode. 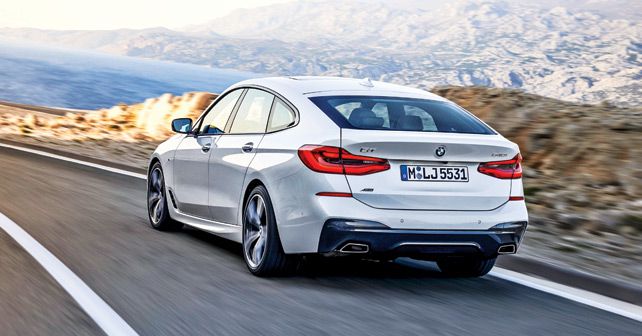 A welcome alternative
The 6 GT’s changes will be a welcome change from an Indian buyer’s perspective. Most Indian customers will welcome the softer suspension and the lighter steering at slow speeds – especially after the much firmer suspension setups that we’ve seen in BMW’s previous models. Overall, the 6 GT seems to have Asian customers firmly in its crosshairs, with taller than average seating, features to keep rear seat passengers occupied, a pliant ride quality and easy handling in city driving conditions. Compared to the 5 GT, this will also come loaded with a healthy equipment list to take on competitors like the extended-wheelbase Mercedes-Benz E-Class. The comfort and class battle, it seems, is just heating up.

X-factor: With a unique combination of luxury, space and practicality, the new 6 GT could prove to be the dark horse in the luxury sedan battle.