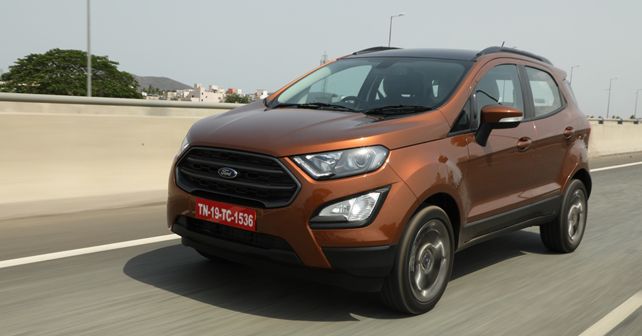 With the S version of the EcoSport, Ford India is bringing a new trim level to the EcoSport lineup. Featuring additional standard equipment and visual changes, it hopes to appeal to enthusiasts with a fun to drive SUV appeal. We drive the latest variant of the EcoSport to find out how extensive the changes are.

If there’s a brand that one can trust to produce fun to drive cars in the Indian market, it would undoubtedly be Ford. More often than not, in the segments that they compete in, Ford’s products are usually the pick of the lot in terms of driving appeal. And with the launch of the EcoSport five years ago, Ford achieved something similar in the compact-SUV segment, offering a competitive product that was also quite fun to drive. Of course, the timing of the EcoSport’s launch, and its butch SUV looks, made it an instant success in India.

However, fast forward five years and the SUV space has become more competitive than ever in India. The EcoSport has seen its share of competition rise with the Vitara Brezza and even the Tata Nexon, making things that much tougher. Ford’s response to this was the facelifted version of the EcoSport with a myriad of changes to improve the appeal of the product. However, with the S variant of the EcoSport, Ford is directly targeting enthusiasts. A direct reflection of this comes with the engine choices, as the S trim is offered only with either the 1.0-litre Ecoboost turbocharged petrol engine or the 1.5-litre diesel because, let’s be honest, there are enough enthusiasts out there who would like a sporty product, but would also like to maintain the efficiency of running a diesel engine. The S Ecoboost is priced at ₹11.37 lakh, while the diesel version is priced at ₹11.89 lakh. 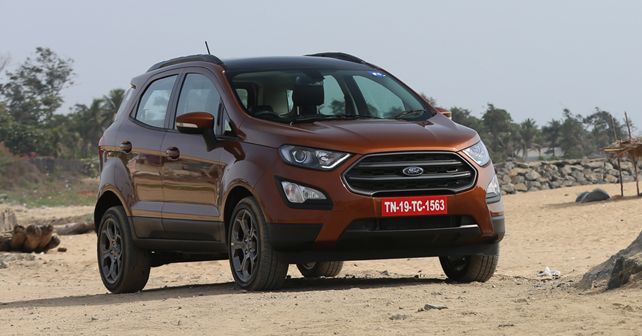 Positioned above the previously range-topping Titanium+ variant, the S gets unique features such as the HID headlights and a standard-fit sunroof that Ford calls the ‘Funroof’. Additionally, the S also features a dark look package with the headlights, front grille, roof, roof rails and 17-inch wheels, all finished in black, to make the S version more distinctive. The orange accents on the dash and seats offer a brilliant contrast to the monotony of the all-black interior. The SYNC 3 equipped 8-inch multimedia system in the EcoSport remains a delight to use with easy touch functionality – the screen in particular looks great with excellent resolution that makes it looks visually very appealing. In the S version, the MID in front of the driver is also a larger 4.2-inch display and features a tyre pressure monitoring system as standard. And, being the top of the line version of the EcoSport, the S also gets six airbags and ABS as standard.

Powertrain wise, the S in Ecoboost form also features a brand new 6-speed manual transmission, while the diesel version retains the 5-speed manual. Our test car was the Ecoboost version, with the engine producing 123bhp and 170Nm of torque. The award-winning Ecoboost remains a delightful powerplant with little or no turbo lag. The engine is quite free revving, however, its best performance is in the mid-range, where it delivers power in a very linear fashion and makes highway progress a breeze. Also, the refinement of the Ecoboost engine is very good with NVH levels, in general, being excellent. The new transmission offers excellent shifts and very well-matched gear ratios. 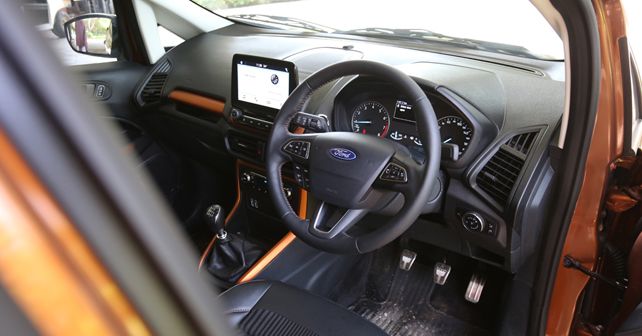 When it comes to ride and handling, Ford has made small tweaks to the EcoSport. As a result, it now features very good ride quality, and yet retains its high-speed stability. The steering too remains quite light, but I think I would’ve preferred a little more feel from it. In everyday use then, the EcoSport’s suspension is very well tuned for our conditions. However, if there’s something that persists with the EcoSport, it is the body roll the SUV has due to its tall design and high center of gravity and in the current platform I doubt there is much that Ford can do to tackle that.

With the EcoSport S then, Ford has improved upon what was a very competitive package. And the dark look package works quite well for me, making the car stand out from the competition and even from the regular trim versions of the EcoSport. The return of the Ecoboost is also a welcome move for keen drivers, though, one word of caution, if you’re a lead-footed driver, the fuel efficiency of the Ecoboost does take a bit of a nosedive if pushed hard. And if that is the case, then the diesel version is always a good choice. All in all, this is a good push from Ford to make the EcoSport stand out in the face of intense competition. With its driving appeal, high quotient of standard equipment and a design that still looks very good, the EcoSport offers a competitive package for those looking for a fun to drive compact SUV.