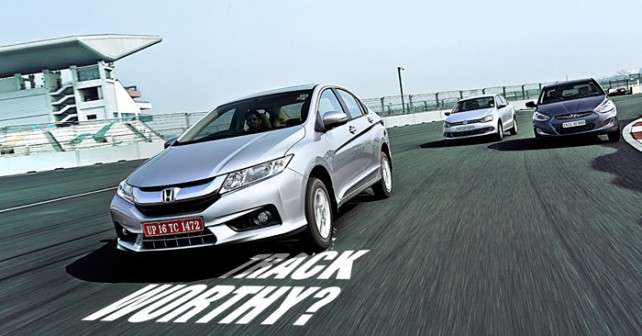 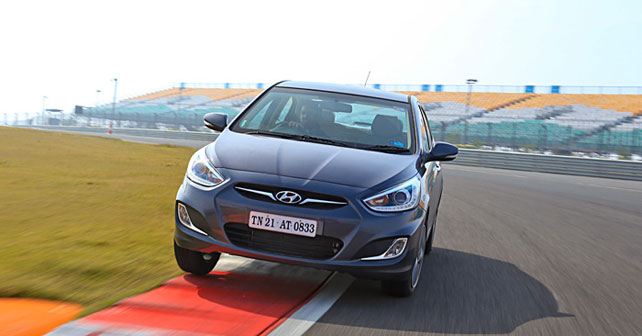 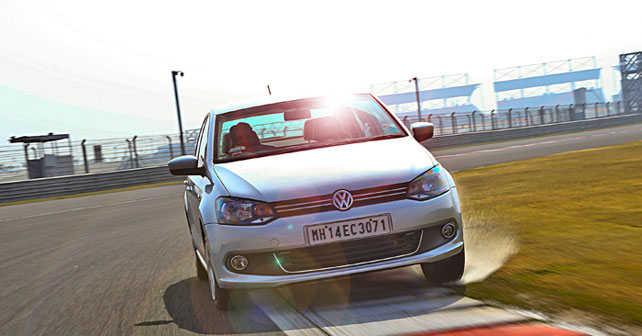 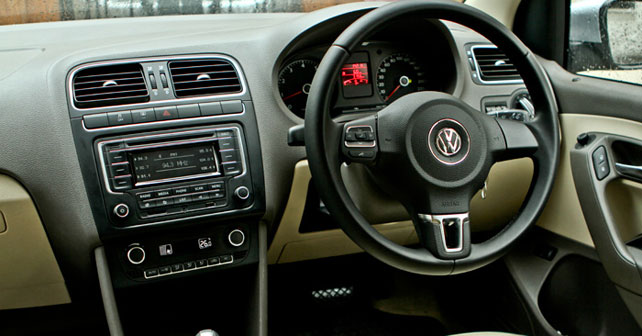 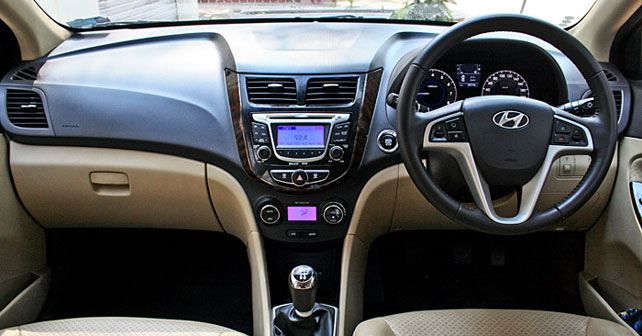 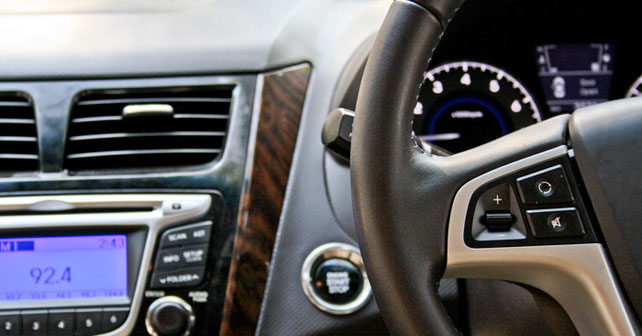 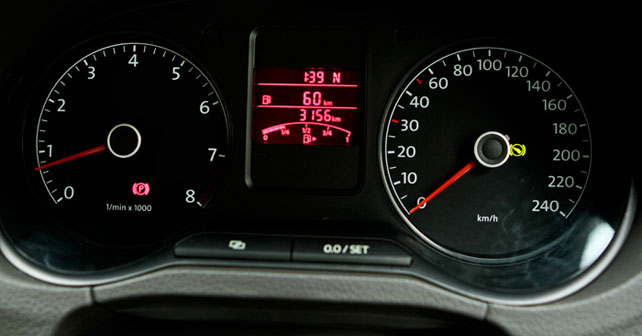 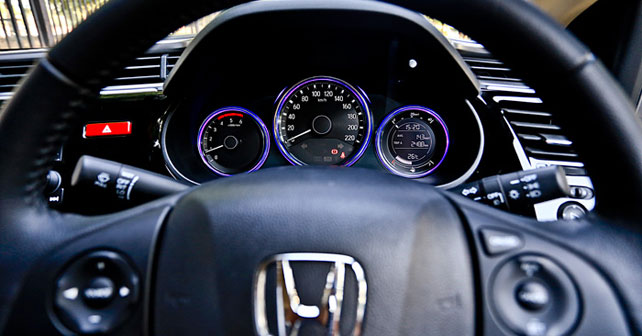 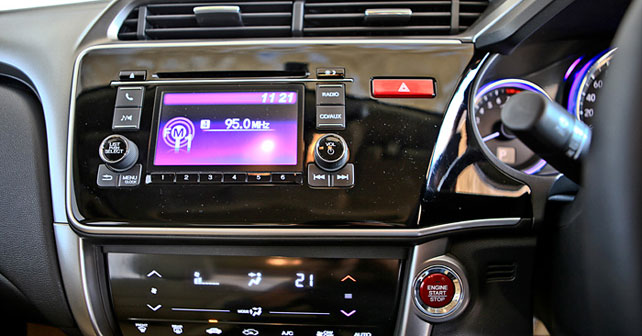 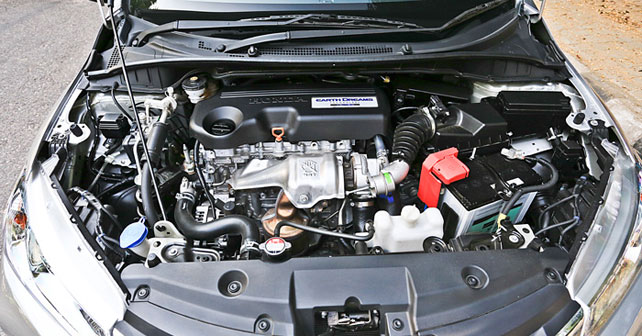 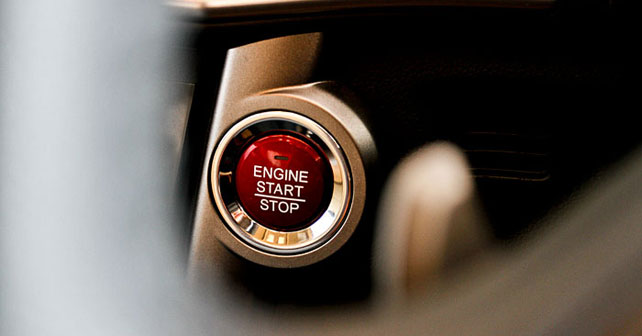 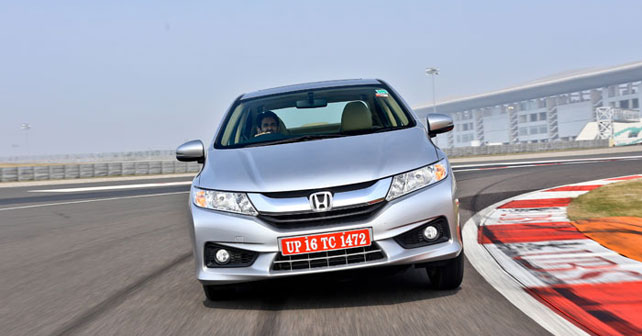 This time at the BIC, the all-new Honda City takes on its familiar rivals – the Hyundai Verna and Volkswagen Vento.

The new Honda City has already made quite an impact. Yes it looks quite evolutionary on the outside, but the real action is in the cabin. On the inside, it has a touchscreen audio system and AC control unit nicely integrated into the centre console. It’s also got a chrome-ringed, bright red, Engine Start / Stop button that hints towards sporting pretentions. The first gen City, after all, was a boy-racer favourite – I know because I had one!

So, the question is – how does the new City fare on the track, and, more importantly, how does it compare with its rivals? To answer that we lined up an all-petrol trio that consisted of the petrol City, VW Vento TSI, and Hyundai Verna 1.6.

So, let’s start with the Vento, which has recently been fitted with the 1.2 litre, direct injection, turbo petrol that’s been surprisingly successful in the Polo TSI – surprising to the company in terms of the positive reception it received from the market. To us, the Polo TSI was a no-brainer! A small hatchback and a decent size engine go together very well indeed as far as we’re concerned – this is why you’ll also find the Polo GT TDI in a few pages time. The question here is, though, what happens to the performance when you add the girth – and, more importantly, weight – of the boot?

The predictable, and short, answer is that it adversely affects performance. But lets dig a little deeper. At the outset, I should point out that we come to the BIC every month to expose truth in engineering – and the truth is that the Vento is the most honest of this trio. The steering of the Vento, while quite light and lacking in feel, is the most direct. It responds to your inputs far more willingly than both the Honda or the Hyundai. There’s less roll in the suspension, and more rigidity in the chassis – both of which you feel immediately when you’re crashing over the kerbs at the BIC.

So, the sedan is as good as the hatchback then! Well, not exactly. You see, with just 104 horses, the Vento is down on power when compared with this Asian duo. And while the double-clutch (DSG) gearbox is lightning quick, it’s not exactly tuned for the track. Firstly, it doesn’t have paddles, but you can use the gear lever to shift manually. But, even then, the computers decide what’s good for you. So every time I would try and exit a tight corner in second, the gearbox would upshift to third when it sensed wheelspin around 4,500rpm. The result was that the car would bog down coming out of slow corners – and considering the lack of power that wasn’t exactly helpful.

It’s clear that the Germans know how to build cars that handle better than anyone else – there’s little doubt there. But the problem is that they can’t seem to leave well enough alone, and add so many electronics that it renders the driver completely useless – which is probably representative of what they think about the useless mass of blood and guts behind the wheel anyway. The Vento is a great car to drive on the street, as long as you don’t want to go particularly fast that is! It’s very capable, and, thanks to the DSG, very comfortable as well – but it doesn’t provide the kind of involvement or enjoyment that can be had from the Polo TSI (or even the TDI for that matter).

What about the Hyundai then? Well, the Verna is nowhere near as precise as the Vento. In fact, it’s a bit at sea on the track. It suffers from chronic understeer, instability under braking, and a steering wheel that seems connected to the front wheels through a bowl of jelly. But – and this is a big but – it has a gem of a drivetrain. The 1.6 litre engine is silky smooth, and it sings all the way to its 6,500rpm redline. The 5-speed manual gearbox is equally smooth and slick shifting, which means that the Verna puts its power down very efficiently indeed – when it’s not understeering that is! It has another advantage as well – the largest wheel and tyre package of the lot. It has 195/55 R16’s, wrapped in a beautiful set of new alloy wheels, while the Vento has 185/60 R15’s, and the City has spindly 175/65 R15 MRF’s especially designed to provide low rolling resistance and increase fuel economy – not exactly what you want to hear on the track.

Of course, not many people will actually bring the new City to the track, so a claimed fuel economy figure of almost 18km/l is far more important than lateral g’s! But that doesn’t take away from the fact that the all-new (Jazz-based) platform of the City is very impressive indeed. Not only does the City feel quite light on its feet, but it feels extremely composed as well. Yes, it’s softly sprung, and the 175/65 tyres don’t help, but the chassis responds brilliantly to your inputs. It’s actually quite a revelation to drive the new City, because the last few generations haven’t exactly been drivers’ cars. This one, thankfully, has the makings of one.

The engine is very rev happy – like all iVETC units. But it doesn’t provide that surge of power as you approach the redline, like the VETC’s of old – in which you could instantly tell when the VTEC cam came on song. In fact, in comparison, the engine in the Hyundai feels bigger than its 100cc differential suggests. What works in the City’s favour, though, is an extremely light clutch that doesn’t require too much travel, and a gear lever that snicks into place like only a Honda can. I found myself pulling out of corners in third, racing towards the redline, and upshifting on the outside kerbs without any lack of momentum whatsoever – the gearbox is that good.

The lap times of the City and Verna are virtually identical, with the Honda edging out the Hyundai by just two-tenths of a second – certainly the closest of any two cars that we’ve ever put head-to-head at the BIC. When we first started out, it looked as though the Verna would be the clear winner. But the City enabled us to push to – and beyond – the limit far easier than its Korean rival. What it lost in terms of absolute grip, it more than made up for through an inherently balanced chassis and predictable handling.

If you look at the telemetry charts of all three cars, you’ll see that the Vento carries more speed through the corners than its rivals, but loses out at the top end. The Verna carries the most speed though the faster corners, courtesy of having the largest footprint, while the City is able to be the most aggressive going into the corners.

At the end of the day, though, these machines are meant to be driven on public roads – and the Verna is much happier being driven at six-tenths on the road rather than ten-tenths on the track. And while it may well have a facelift in its immediate destiny, it’s still the most striking of the lot. The Vento is the most square faced and straightforward of the lot – no gimmicks, just cutting edge technology. So, if you want an automatic petrol sedan, the Vento is a great choice – the gearbox is certainly a lot more responsive than the CVT fitted to the automatic City.

My choice, though, would be the five-speed City. The first thing I would do is fit larger wheels and tyres – but, that apart, the City is great overall package. The latest generation car has certainly gotten back some of the spunk that it lost over the years. It’s now far better equipped than it’s been in the recent past to face a fierce battle. And, as the lap times indicate, the battle is certainly fierce indeed. 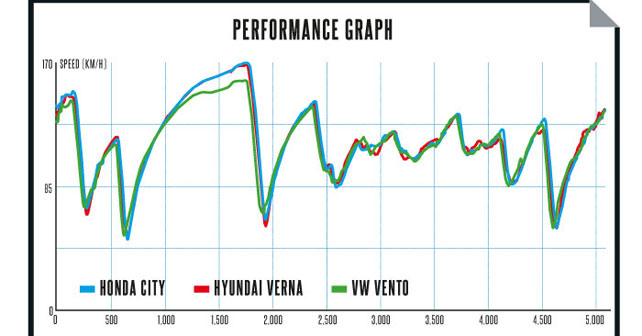