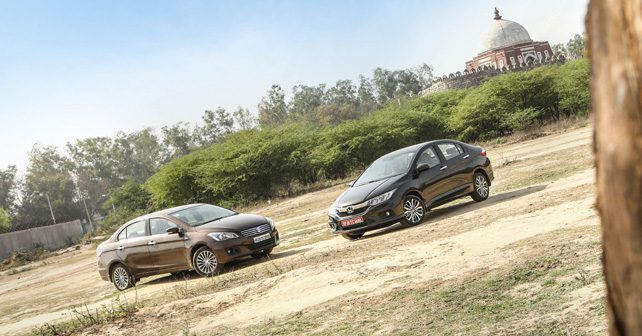 Off late, mid-size sedans have had a tough time competing against compact SUVs – which seem to be flying off the shelves. But the Honda City and Maruti Suzuki Ciaz have managed to keep the sedan flag flying. Now the Honda has been updated to well and truly take the fight not only to its high-riding rivals, but also to the Ciaz. 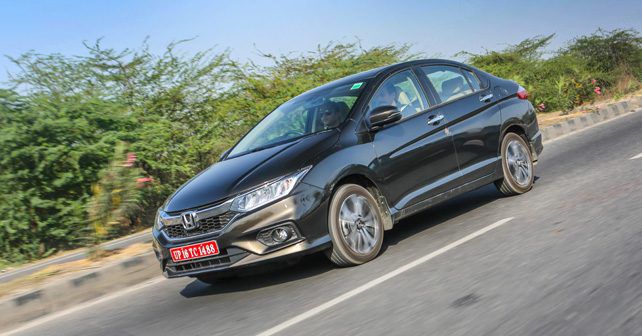 I’ve actually lived with the Ciaz for a couple of months, and during that time I was quite impressed by the way it drove. But when it comes to the Honda City, it simply offers superior comfort levels and build quality. The new facelifted City makes you feel, in a nutshell, special. I’m not saying it’s perfect, but it comes close! For starters, the City’s new LED headlamps, which come with daytime running LEDs, look gorgeous and add an air of superiority. Honda didn’t want to leave anything to chance in their quest to make the City look premium, so its front fog lamps and tail lamps are LED units. This is also a first in this segment. The City looks sharper as well thanks to the new chiselled bumpers, which sport a black honeycomb mesh. At the back, it now has a subtle boot lid spoiler. Honda have also changed the alloy wheel design, and you get a contemporary set of either 15 or 16-inch diamond cut wheels depending on the variant.

The design of the pre-facelift City’s dashboard was an eye sore to say the least. The previous version came with the same basic infotainment system that’s also available in the Jazz. If that isn’t blasphemy for a sedan that costs in the region of Rs.13 lakhs then I don’t know what is. Many potential buyers also felt this way, and that’s why the City’s sales figures plummeted to below 3,000 units a month in 2016. Thankfully, Honda appears to have remedied the situation – and we’re happy to say that the 2017 City boasts of a 7-inch Android-based smart entertainment system. This touch screen audio, video and navigation enabled system is very simple to use, and with the MirrorLink it easily syncs to a smartphone – irrespective of its operating system. Honda have also tweaked the cabin with the dashboard getting a more pronounced design and the steering looking very sporty as it resembles the new Civic’s. 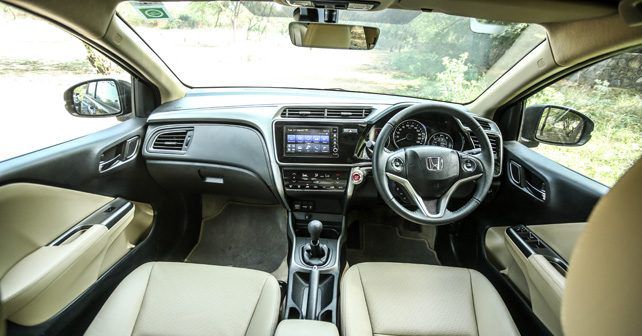 The City’s cabin always was, and continues to be, spacious enough to seat five adult passengers. The seats remain the best in the segment, as they’re extremely supportive – especially when it comes to lower back and thigh support.

Under the skin, the City is pretty much the same. The 1.5-litre diesel motor received its fair share of criticism when it was first launched in 2014, but in time Honda have managed to reduce the amount of engine noise entering the cabin. And so the 2017 City is a much quieter car to sit in. Mated with a six-speed manual transmission, this 99bhp powerplant has a linear pick up and responds spontaneously. It’s extremely capable – both when tackling start-stop traffic or while munching miles on the highway.

The City’s suspension set up remains unchanged, so it still has the McPherson Struts in front and a torsion beam axle at the rear – which is to say that it’s still able to carpet most potholes. Because of the cushy ride, when you do push it there’s a fair amount of body roll. But, then, this is a practical sedan with plenty of cabin room and a comfortable ride – not a sports sedan.

The City is one of the most expensive sedans in its segment, but with that comes legendary reliability, a fuel efficient diesel engine, great build quality, a sun roof, 7-inch infotainment system with 1.5GB of internal memory, striking LED headlamps, and daytime running LEDs. So, in some ways, the price is justified. After all, class can be a bit pricey. 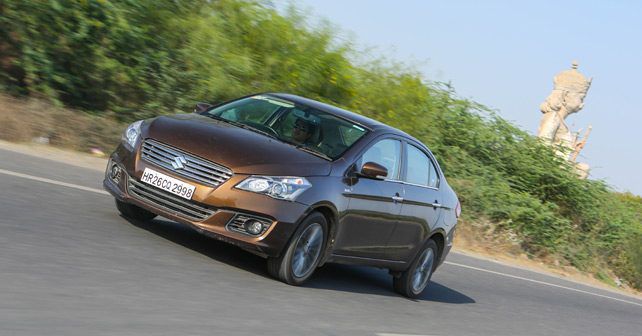 I have to agree with Arup, the Honda City really has been in a class of its own. Right from the first-gen VTEC model that instilled fear in the hearts of 1.6-engined rivals to the current fourth generation model. Honestly, the first time I sat in this model four years ago, I was suitably impressed – after all, this is D-segment space and comfort in a relatively accessible package.

But, then, if there was ever a car that could have given the mighty Honda City a run for its money, it was the Maruti Suzuki Ciaz. Maruti really hit the nail on its head with this one. For starters, it’s even bigger and more spacious, it’s very well equipped, more efficient, and yet it drives well despite having a smaller set of engines. This recipe, combined with Maruti’s reputation for low maintenance costs, means that the Ciaz’s sales figures simply soared past the City’s – the once undisputed sedan champion.

And why wouldn’t it? The Ciaz comes with so much cabin space that it absolutely spoils you in the rear seat – and that’s to say nothing of its 510 litres of boot space. Honda may have fitted in a snazzy new infotainment system, but the fact of the matter is that Maruti’s older CarPlay system is simply better. Its usability is just so simple, yet brilliant. Factor in its usable voice command system, plus good sound quality, and you can’t really ask for much else – leaving Honda’s new system to feel a bit clumsy and aftermarket-ish. 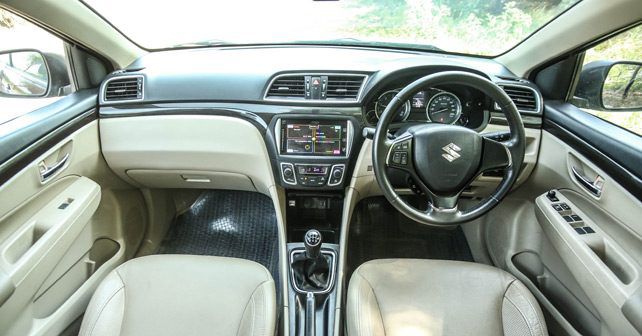 Yes, the Honda’s cabin looks better and the plastics feels more premium – as do the front seats – but there’s no getting away from the fact that the diesel Honda’s NVH levels are still far too intrusive, especially when you go higher up the rev band. Sure, the bigger 1.5-litre oil burner in the Honda packs in more power on paper, but in the real world the Ciaz is just as quick and there isn’t much to differentiate the two on the performance front really. Where the Ciaz does win though is on the efficiency front. Now, I’ve driven both these cars on my daily commute – during which time the City returned an efficiency of 20.2km/l while the Ciaz clocked in an even more impressive 21.3km/l. So it’s not just ARAI figures where the Ciaz is more efficient, but under normal driving too. It’s also worth noting that the Ciaz diesel comes with a mild hybrid system with automatic engine start-stop and power assist to boost fuel efficiency. So, technically, its powertrain is technologically superior to that of the City’s.

Still, the update has made the City far snazzier. The facelift pushes the boundaries for the mid-size sedan, with its LED lamps, six-airbags, one-touch operated sunroof and a more upmarket cabin. And so, on these accounts, and in the interest of offering more value to the customer, the City is the clear winner here. In fact, in front of the updated City, the Ciaz’s cabin has started feeling a bit dated. But, then again, the top-end Ciaz costs the substantial sum of Rs.4 lakhs less than the City. So, no matter how good the City becomes, the Maruti as always will reign supreme.

X-Factor: The Honda City is a status symbol all its own, and the new model elevates it further with segment leading features and the most modern cabin amongst rivals.

X-Factor: The Ciaz offers the most bang for your buck, and is a no compromise mid-size sedan with affordable maintenance costs. It’s very efficient too.