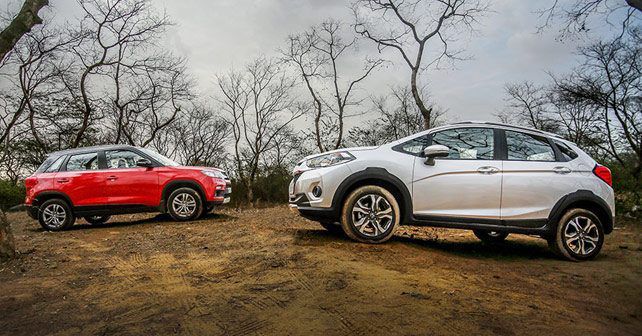 Two giant forces of the Indian automobile industry collide as the WR-V wages war on the Vitara Brezza. So, which one is more deserving of our vote – and your money?

It’s time to buy a new car, and life, as always, has thrown a curveball at you. Your pocket doesn’t allow you to look beyond a premium hatchback, but your heart is sold on SUVs. What do you do? Well, just like everyone else these days, you end up zeroing in on a couple of pseudo-SUVs. This, however, doesn’t ensure that life is going to get any simpler because the compact-SUV / crossover segment has become extremely confusing these days.

Thus far, you only had real pseudo-SUVs and high-heeled hatchbacks fighting it out among themselves, but now you have another entrant that follows an entirely different approach. It’s a high-riding vehicle, but not an out-and-out compact-SUV. And while it may have the underpinnings of a hatchback, it does try and differentiate itself visually.

You see, after the BR-V’s dismal performance, Honda quickly went back to the drawing board so as to develop something more aspirational. This, invariably, meant coming up with a compact crossover that is (a) Not ungainly; (b) Has all the bells and whistles; and (c) Is priced well. Basically, everything the BR-V wasn’t. The result of all this is the subcompact crossover that you see here – the WR-V.

On the face of it, Honda seems to have covered all the bases – the WR-V has a tempting price tag, it has a bit of masculinity in the way it looks, and is decently kitted out with new features and equipment. Plus, it’s got the “premium” Honda badge. It’s only fair to assume, then, that new car buyers must be flocking to Honda outlets with chequebooks in hand. Except, this isn’t the case. Since its launch in March, the WR-V has been averaging around 3,500 units per month. Only about one-third of what the segment leader, the Maruti Suzuki Vitara Brezza, does! Ever since it went on sale, the Brezza has been selling like hotcakes – maintaining average monthly sales figures of over 10,000 units.

Sales numbers aside though, does being a bestseller itself imply that the Brezza is the better of the two? I mean, it could well be, but our job is to find out one way or the other. 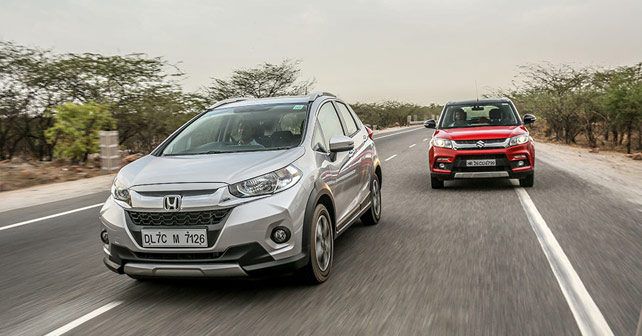 Bold vs. Sober
For those of you who are madly in love with the cult of SUVs, the Brezza would inevitably pique your interest a wee bit more. Its boxy panels and butch looks, coupled with squared off wheel arches, a dual-tone paint scheme, faux skid plates, 16-inch alloy wheels, et al, do the trick and impart a rugged stance. In comparison, the WR-V doesn’t look that pretentious – mainly because, unlike the Brezza, its hatchback underpinnings are far more evident. The thing is that anyone can make out that it’s based on the Jazz, and yet the WR-V somehow manages to look distinctive. Credit to Honda designers – the many sharp angles helps make it look aggressive. The sharply stretched out headlamps with LED DRLs clubbed with a thick chrome grille, a wide bumper, a prominent skid plate and 16-inch alloy wheels (it runs on 195mm wide tyres as opposed to the Brezza’s 215mm rubber) are some of the bits that catch your attention. The rear section, however, looks remarkably similar to the Jazz. The re-profiled tail lamps help give it a somewhat unique identity. Overall, it has to be said that the WR-V looks more like a mix between a hatch and a crossover while the Brezza is more SUV-ish.

SUV fantasists will also appreciate the Brezza’s higher ground clearance and taller height (198mm vs. 188mm; 1,640mm vs. 1,601mm). Now, while it seems that the Honda should just throw in the towel – not so fast. You see, you’ll cringe at the thought of driving the Brezza on anything other than smooth tarmac. Let’s just say that the suspension setup of the Brezza is quite stiff. Hit a rough patch of road and the ride tends to be quite sharp. Especially at low speeds, it feels as if the dampers have little or no give at all. On the flip side, the stiffer suspension makes it a great handling car – and that makes it great fun to drive! Throw it around a corner, and there’s very little body-roll – which means that it gives you the confidence to push it as hard as you dare. The steering isn’t dripping with feel of course, but it is direct and does the job of keeping the front end tied down in a neat and effective manner. But, then again, how many of you are really interested in corner carving in a car such as this?

There’s a stark difference when you’re behind the wheel of the WR-V. Despite having hatchback underpinnings, it doesn’t have the surefootedness of the Brezza in corners – owing to its softly sprung suspension setup. However, because of that the WR-V shines through in terms of comfort and practicality – the ride is plusher than in the Brezza, and it feels much more relaxed inside the Honda when you encounter undulations in the road. The steering of the WR-V doesn’t have the heft of the Suzuki, and, at high speeds, it tends to be ‘floaty’. High-speed stability in both the cars is equally good, but I felt that the WR-V’s brakes are more progressive and have more bite than the Brezza’s.

Heart of the matter
Honda gives you the option to choose between a 1.2-litre petrol and 1.5-litre diesel in the WR-V. The Brezza, on the other hand, banks solely on the tried-and-tested 1.3-litre diesel mill. So, of course, the competition here is between the two oil burners. With 99bhp and 200Nm on tap, the WR-V has a clear on-paper advantage over the Brezza’s smaller unit that develops just 89bhp and 190Nm. The WR-V also comes paired with a 6-speed manual as compared with the ‘meagre’ 5-speeds in the Brezza.

Out on the road, both engines suffer from perceptible turbo lag below 2,000rpm – but it’s the Brezza that feels more responsive and easier to get up to speed. However, compared to Honda’s bigger engine, the 1.3-litre engine has a far narrower power band. And, while the WR-V feels lethargic at low speeds, once you get the engine spinning past the 1,500rpm mark, it has a stronger pull and doesn’t run out of puff as quickly as the Brezza. The gearshifts feel a bit notchy though, especially when compared with the Brezza’s short and slick-shifting gearbox. Being diesels, both are clattery – but it’s the WR-V where things get slightly noisier. You can even hear the engine over the music system at times. 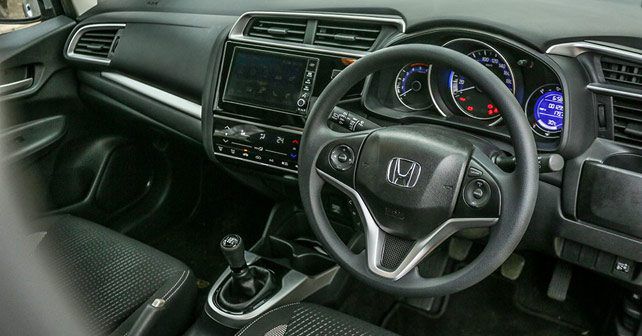 Features aplenty
In terms of features and equipment, you can’t really go wrong with either. The top-end variants on test here are brimming with features, such as a touchscreen infotainment system, automatic climate control, start-stop ignition system, keyless entry, a reverse parking camera, cruise control, and a lot more. In some areas, the Brezza has the edge over the WR-V. For instance, it comes with automatic projector headlamps, automatic wipers, parking sensors, and, for the tech savvy amongst us, an infotainment system that has Apple CarPlay and Android Auto connectivity options. The WR-V only has MirrorLink. Although, I have to say that I felt the WR-V’s screen was more responsive and easier to operate. The WR-V also has an electric sunroof, which is a segment first. Safety wise, the WR-V comes equipped with dual airbags and ABS as standard. The Brezza has driver’s airbag as standard across the range, while a passenger airbag and ABS is optional in lower variants.

Back to square one
I hate saying this as a road-tester, but it’s really hard to choose a clear winner in this test. It all boils down to your personal preference. The Brezza appeals to the heart more since it’s much better to drive, has SUV proportions and comes with snazzy paint options in addition to a bagful of features and equipment. At the same time, you can’t turn a blind eye to its bone jarring ride, average build quality and flimsy seats. These can be real deal breakers, trust me.

The WR-V scores big in terms of practicality, comfort and build quality. It’s also more fuel-efficient. Also, you do have to factor in the fact that not everyone buys the top-spec trim of these cars. And if that’s the case, the base WR-V will come across as really good value-for-money since it’s very well equipped. Where the WR-V loses out against the Brezza is in the looks department, since its hatchback roots are clearly evident. 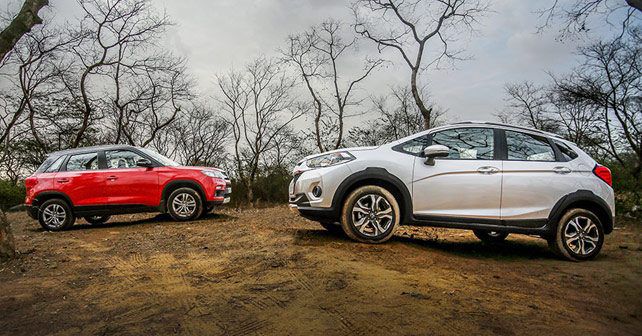 All said and done, the WR-V is more comfortable. But, for people who are smitten by the SUV bug, there’s no contest really. The SUV proportions and commanding driving position are the dealmakers here, and the Brezza throws up aces in this department. Ultimately, if it’s a compact SUV you want then there’s only one real choice. But if it’s a comfortable and well-rounded package you’re after, the WR-V actually makes a great case for itself.

X-Factor: Looks like an SUV, drives like a sporty hatchback, comes packed with features and is priced very well. Not much else to say really.