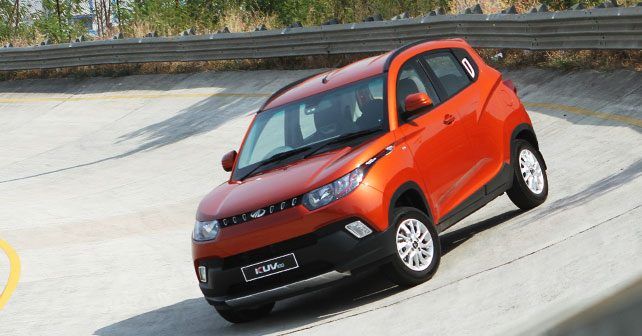 With the KUV100, Mahindra is targeting a segment it has never ventured into before. The question is, with very strong competitors, and a plethora of products in the segment already, is the KUV unique enough to appeal to Indian customers?

In the automotive world, venturing into a new product segment is always a big ask for most manufacturers. To be successful, getting the product right is just one of the few challenges that the company needs to focus on, along with that come the larger challenges of brand positioning, pricing and, of course, there’s always the competition to reckon with. Now, Mahindra has been in the game long enough to figure out these things, but the whole gamut of the challenges changes when you’re trying to shoehorn your way into a segment dominated by the two largest manufacturers in the country – Maruti Suzuki and Hyundai. 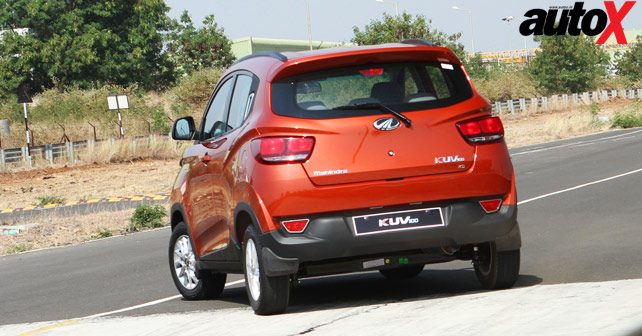 Apologies for the early spoiler, but as most of you would’ve figured out by now – especially if you’ve already seen the highly competitive pricing that Mahindra has revealed a few minutes ago – the KUV100 is not so much a compact-SUV, but rather, it’s more of a small hatchback enhanced to resemble a crossover and competing with cars like the Maruti Swift and Hyundai Grand i10. Of course, it does have one of the biggest benefits of Crossovers/SUV’s in India, increased ground clearance, and at 170mm its more than capable of handling most kinds of roads in our country. So, at a first glance, the KUV has aspects that work to its advantage, the design features distinct curves on the front, rear and sides of the car and you can see a clear resemblance in certain aspects to the XUV500. However, while the design might be eye-catching – especially in the bright orange and red hues of our test cars – it is a bit of a hit-and-miss when you look at it in design terms. Some aspects of the car work well, such as the front end with its aggressive nature works well, but the swooping rear, especially when viewed from the rear three-quarters looks quite dumpy. 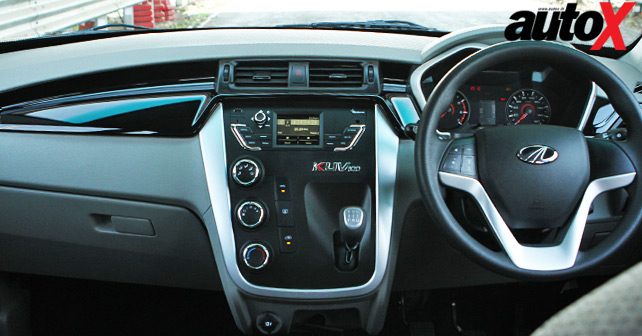 But, perhaps the more striking aspect of the KUV comes with its interiors. We’ve, off late, seen Mahindra seriously raise its game when it comes to the interiors of its products and like the TUV300, the KUV too comes with interiors that are well designed. An interesting aspect of the KUV is the floating dashboard design, which means that the front floor of the car doesn’t have any part of the dashboard interfering with the available space, which has been done to accommodate the third passenger in the six-seater version of the car, but more on that later. The plastics quality, the switchgear and general fit-and-finish on the KUV is of a good quality and is certainly competitive for the segment being targeted. More over, the seats are quite nice to sit in, especially in the five-seater version and feel like a comfortable place to spend time in. As far as interior room is concerned, the front of the KUV is quite spacious, and three adults can sit fairly comfortably in the six-seater version, with the extra width of the car helping matters. The rear is fairly spacious for the size of the car but people over six-feet tall might be a tight fit as far as legroom is concerned. One interesting aspect of the KUV is the six-seater version of the car, which features a larger passenger seat, enabling a third passenger to sit at the front. In practice, the legroom of the middle seat is quite limited due to the dashboard design, but if needed, it can accommodate smaller framed adults and children with ease, and even comes fitted with a seatbelt for the third passenger.

However, the biggest advancements for Mahindra come in the platform and running gear of the KUV. Featuring a brand new monocoque platform, the KUV has been designed from the ground up to be competitive in its segment, with Mahindra’s previous experience with the XUV’s platform coming in handy. So, the KUV is fairly balanced to drive, with its wide stance giving it quite a planted feel, even at high speeds. Given the limited nature of our drive at the Mahindra test track in their Pune factory, we couldn’t explore much of the dynamic abilities of the car, but from what we could experience, the KUV feels stable at high speed, the ride seems to be quite decent at medium to high speeds, and when pushed hard, it ultimately understeers. The KUV also features ABS as standard fit on all versions, and the brakes work quite well, with the car stopping in a straight line, and the ABS kicks in quite aggressively when needed. 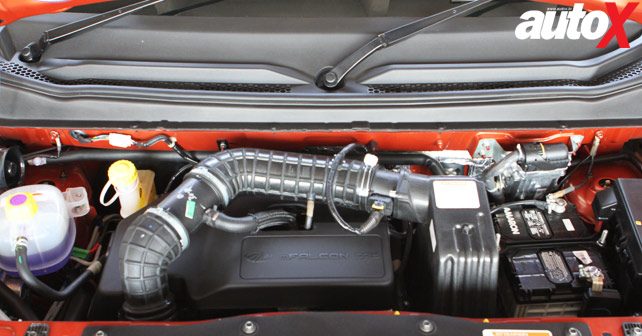 The other highlight of the KUV100 are the new engines, with both the petrol and diesel engines being brand-new three-cylinder units of 1.2-litre displacement. Being a new lineup, they also feature the latest technological innovations, with the petrol unit featuring 4-valves per cylinder, all-aluminum construction, as well as dual variable-valve timing. As a result, the petrol engine produces 82bhp and 115Nm of torque, while offering a claimed fuel efficiency of 18.15km/l. The diesel engine of the other hand features an aluminum head, along with common rail direct injection, and produces 77bhp and 190Nm of torque. Both engines are mated to a brand-new 5-speed manual gearbox. When driving the KUV, the what's evident with both engines is that both units feel like well engineered, modern units that are refined, linear in their power delivery and respond well to throttle inputs. The five-speed ‘box shifts quite well, and the dashboard mounted gearlever position quickly becomes second nature as its falls naturally to hand, more so in the six-seater version, where the front armrest becomes a natural resting place for the driver’s left hand. Another first for Mahindra with the KUV is the electrically assisted steering, and while it might not have much feel, it as decent weight to it, and feels quite well setup. 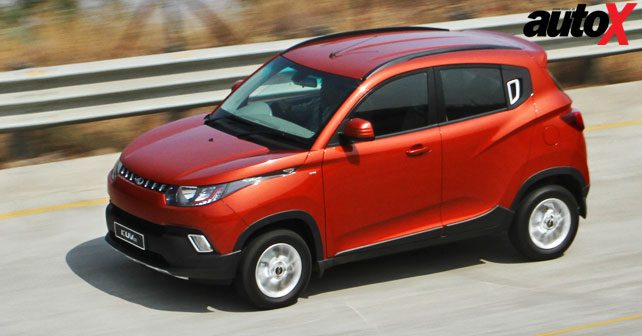 So, while our first test drive of the KUV100 was under the limited conditions of Mahindra’s own test track, there are a few things that become apparent about the product. One, the monocoque structure, as well as the running gear, is a new step up for the manufacturer. In fact, I might be putting my neck out on the line for saying this, but to me, it seems like the most modern combination of chassis and drivetrain that Mahindra has produced yet, and certainly feels the most balanced as both engines are well-suited to the size and weight of the car. Secondly, the interiors, as well as the space management has also been done quite well, which obviously adds to the appeal of the KUV. Third, the pricing of the KUV – ranging from Rs. 4.42 – 5.91 lakhs for the petrol version and Rs. 5.22 – 6.76 lakhs – is ultra-competitive and offers a very good value proposition to prospective customers. And lastly, with its unique looks, it does offer a discerning factor for the KUV100 to stand out in a segment of me-too hatchbacks, and that in itself, might be a big clincher for the company.