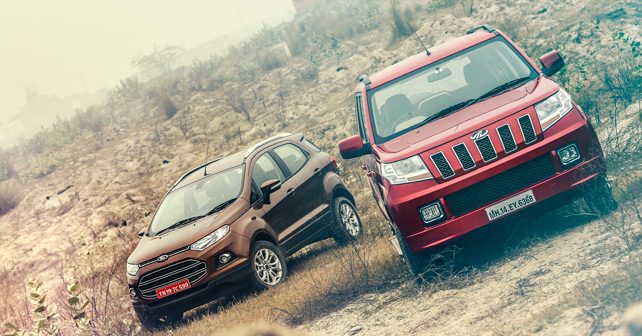 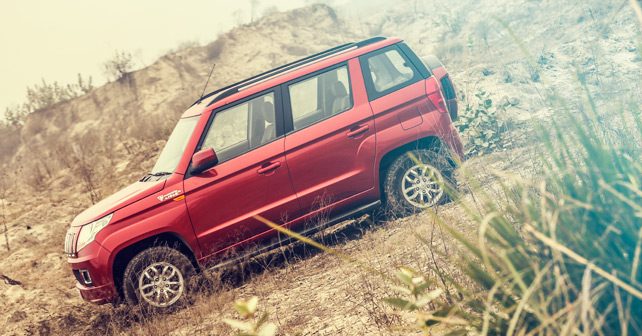 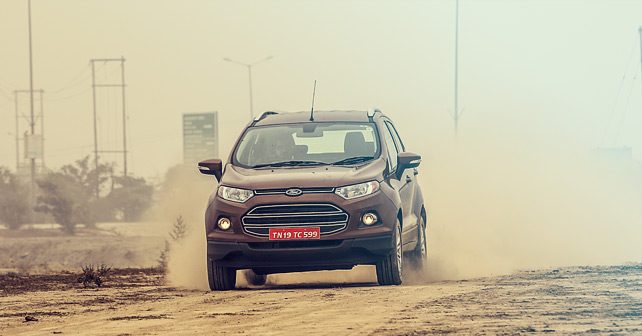 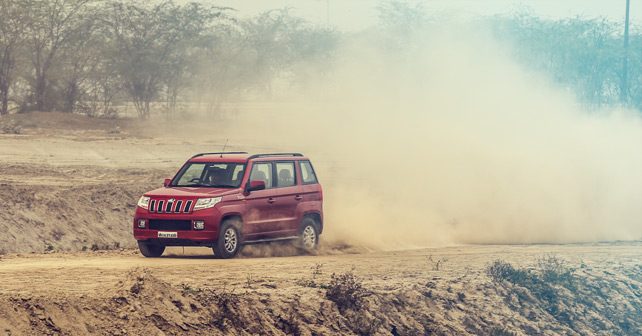 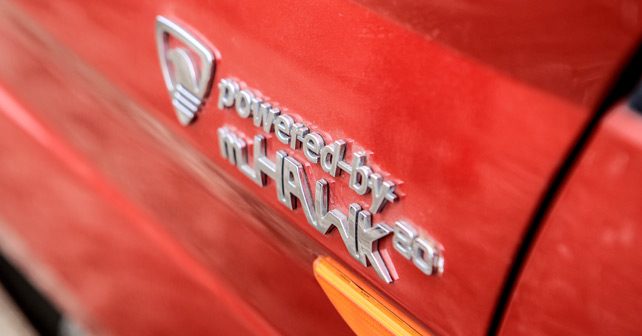 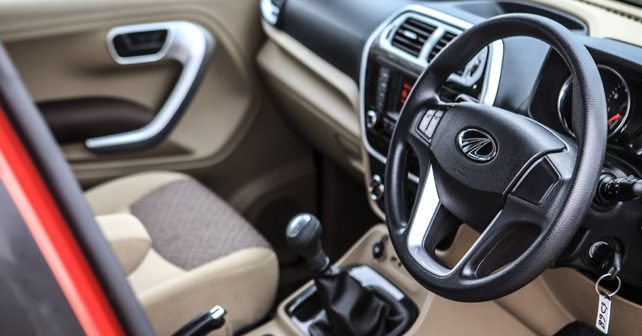 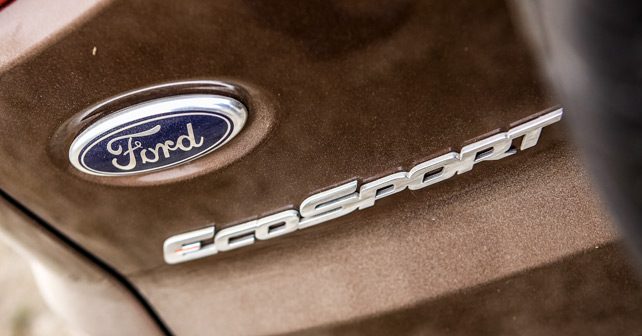 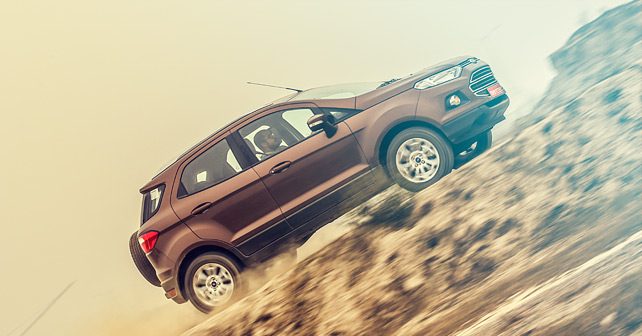 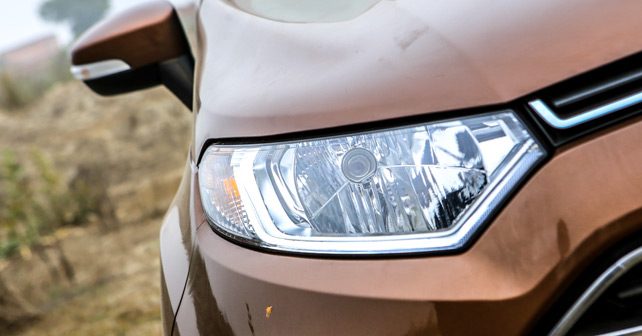 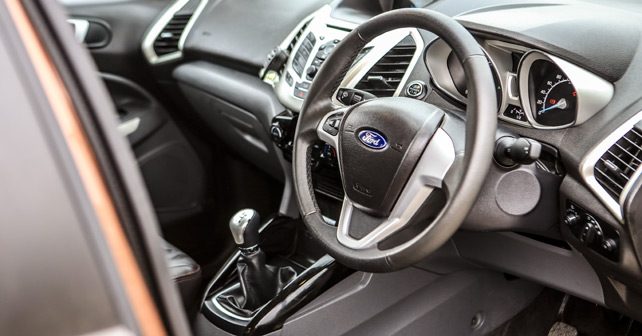 Ever since its launch a few months ago, the Mahindra TUV300 has been making all the right noises. So we decided to unleash this brawny SUV onto the segment leader, the Ford EcoSport, to see if it can muscle its way to the top.

In 2013, Ford changed the outlook and perception for SUVs, as they launched a sub-4 metre compact crossover – the EcoSport, which was an instant runaway success. Sure, initially, they didn’t have enough vehicles to match the demand. But, as the EcoSport was one of the most anticipated urban SUVs in a long time, many patiently waited for delivery. It’s been three years now, and the EcoSport still sells in pretty decent numbers. But the reason for this could also be the lack of competition. Now Mahindra tried to steal Ford’s thunder once before, by launching the Quanto in 2012 – but their ‘compact SUV’ was nothing more than a pint size Xylo. Not surprisingly, it bombed in the market. So, with the sub-4 metre utility segment becoming Mahindra’s Waterloo, they went back to the drawing board, played to their strengths, and came out with the rugged TUV300. Now the ‘Tough Utility Vehicle’ is expected to give the EcoSport some serious competition, but does Mahindra have a segment leader on their hands?

Ford have kept their ‘golden goose’ updated, whether it’s through their Sync infotainment system or by making small tweaks to the exterior. The 2016 model gets some additional tweaks, both inside and out, but first let’s talk about the new 1.5-litre diesel engine that made its debut in the Figo Aspire compact sedan. The new powerplant is a gem, and now gives it an additional 9bhp boost – increasing its total output to 99bhp. The previous engine suffered from turbo lag, especially at slow speeds, but now the EcoSport doesn’t face that problem. The new engine has a linear, but much improved, pick up. And it also feels smoother and more refined. With better insulation materials, the Ford’s cabin feels less noisy – even when you’re keeping the revs up. But, at high speed, the powerplant does feel strained. As before, it’s mated to a 5-speed manual transmission and there’s still no sign of a diesel automatic – which could propel EcoSport sales further. The electronic power steering lacks any sort of feedback and feels feather light. This is the new school of thought for Ford, because it makes their cars a lot easier to manoeuvre – especially during parking – but not quite as driver-oriented as they used to be.

Mahindra’s first compact SUV project might have been a hurried one, but the TUV is a well thought out SUV. Its strongest point is the 1.5-litre, 3-cylinder diesel engine that produces 84bhp. Usually 3-cylinder engines are unrefined, but M&M has added a dual-stage turbocharger that ensures better responsiveness and acceleration. At low revs, the 1.5-litre packs a punch, which translates into fairly good driverability in slow traffic. The trouble starts when you get deeper into the rev range, as the TUV runs out of steam quite quickly. The TUV comes with an AMT as well, but our test car had a 5-speed manual transmission – which was notchy and heavy when compared to the EcoSport. But it’s not vague and slots in well. It’s also equipped with a micro-hybrid stop-start system. Eco mode saps all of its power, but it does return better fuel economy figures.

If you take a closer look at these two SUVs, you find out very quickly that they’re virtually chalk and cheese. The EcoSport is based on a monocoque chassis, while the TUV swears by its ladder frame chassis. The Ford is the better handler of the two, thanks to the chassis of course – but also because it’s 300 kilograms lighter than the M&M. The main purpose of the EcoSport is to provide an alternate to customers who would ordinarily opt for a sedan or premium hatchback. Therefore, it drives like a car and sails through corners. The TUV, on the other hand, is also focused on urban customers – but it’s far more rugged. And so, when the TUV encounters potholes, the occupants are immediately aware of its predicament – since the ladder frame immediately transmits the sensation back into the cabin. On the whole, though, the TUV is actually quite refined for daily use. Sure, the handling is no match for the Blue Oval but the Mahindra will surprise you with just how easy to drive and livable it really is.

On the outside, the EcoSport continues to look very contemporary, and, therefore, Ford has decided not to tinker around with the design. It has received some subtle tweaks, like the headlights that now come with LED daytime running lamps. Ford has also changed the design of the alloy wheels, increasing the EcoSport’s style quotient. Step inside, and the typical all-black interiors will welcome you. The first thing you’ll notice, though, is that the indicators are now on the right-hand side. The interior rear view mirror is electro chromatic, therefore it avoids the glare from the headlights of the car behind you. Adding a dash of premiumness, the handbrake is draped in leather. However, the EcoSport’s limited space for rear passengers remains its major flaw. Even though the seats are crafted in order to provide a lot of support, it’s best not to have more than two adults in the back.

Moving now to the Mahindra – they’ve always been inspired by Jeeps, and the TUV is no different. The front rectangular air dam in the bumper, square fog lamp housings and unimaginative five-slat grille may come across as being a bit boxy, but it certainly turns heads. In profile, it flexes a prominent shoulder line, while a tailgate mounted spare wheel with cover and a rear window with thick black surrounds reminds us of the XUV500. This compact SUV has an impressive ground clearance of 190mm, but the EcoSport still remains the king with 200mm. Step inside the TUV, and the interiors feel contemporary. Plus, the cabin feels airy, thanks to the beige colour – this is perhaps its biggest plus over the Ford. The centre console houses a modern looking double-DIN stereo with Bluetooth connectivity. Even though Ford’s Sync provides a lot more features, the array of buttons on the centre console look a bit cluttered and too old school for our liking.

No pun intended, but this is a tough call as the EcoSport is more of a premium hatch on stilts, which successfully exuberates a modern crossover look. The TUV300, conversely, is all about its butch road presence. But let’s make it very clear, neither are for off-roading – they’re more about creating an SUV persona. As a whole, the EcoSport is better built, the interior feels nicer, and when it comes safety and comfort features the Ford leads the way. Moreover, the 1.5-litre 99bhp engine is very refined and has plenty of punch. But if you think crossovers are a little too demure for your personality then the TUV is far more suited to your tastes. Sure, it has less power than the Ford, but in the city you’ll barely notice it. Also, the rear passengers get a lot more room and the TUV comes fairly loaded with features too. So, the question is what works for you – a suave and sophisticated urban crossover, or a rough and tumble brawler?