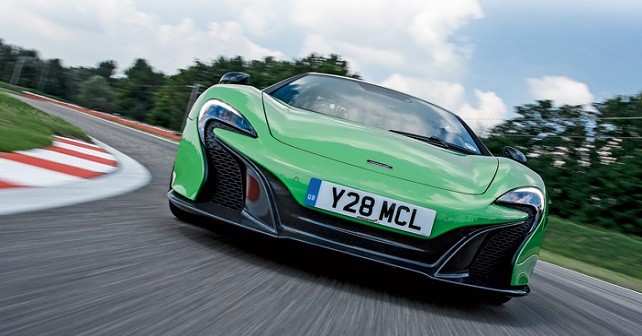 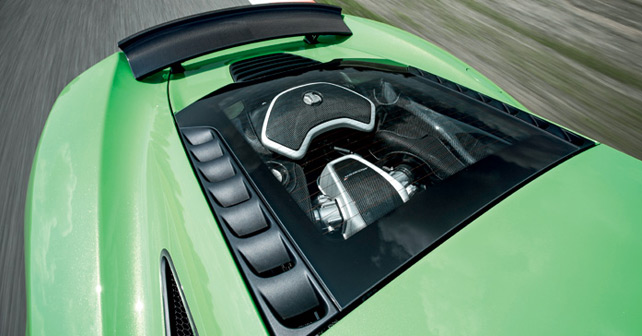 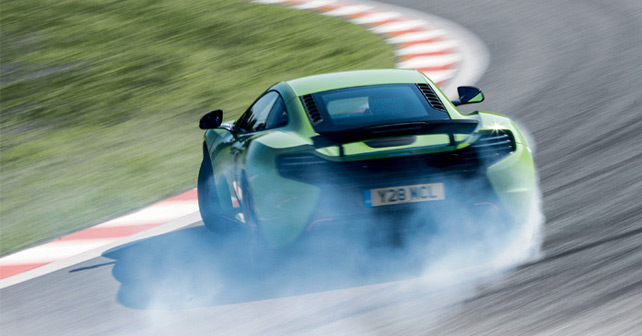 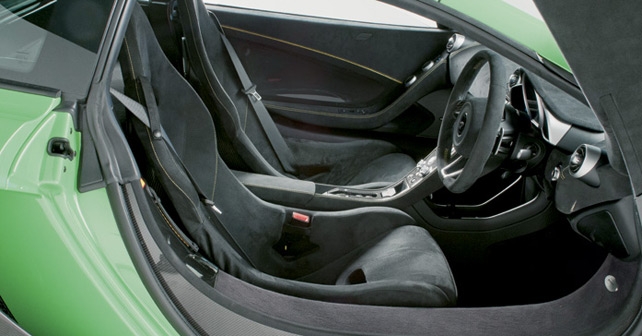 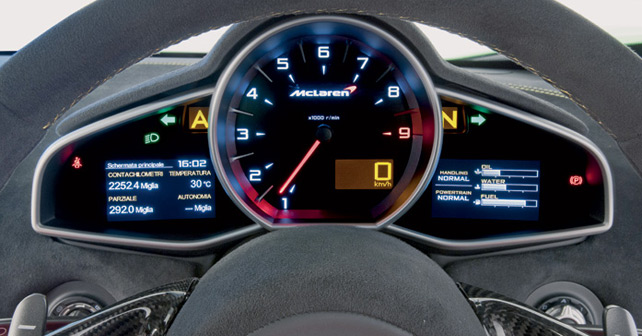 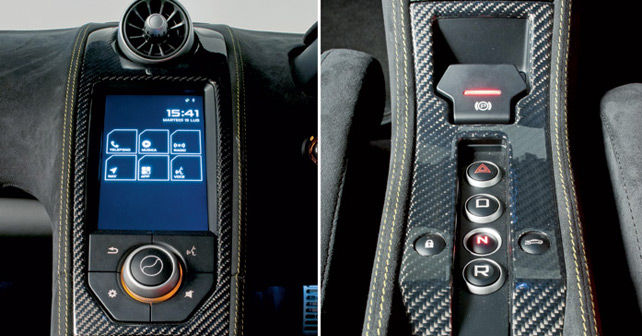 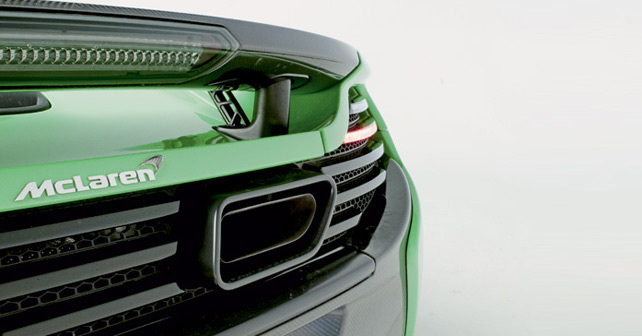 Amazing engine, superb behaviour, and aerodynamics from F1. The McLaren 650S came to Vairano fitted with these weapons in order to challenge the record of the Lambo…

In Vairano, nowadays, discussions involving the Bologna-based manufacturer are not uncommon. After all, the lap record is now held by the Lamborghini Huracan – which, with its time of 1:11.796, is half just a tenth faster than the Gallardo Squadra Corse (see the last issue for that feature). All-wheel drive makes the difference on our mixed track. However, the hunt for the record is always open. Ferrari too came forth with the rear-wheel drive 458 Speciale, and did a time of 1:12.449. And, in this super exclusive club, another protagonist is McLaren – which, for nearly 50 years, has been a rival to Ferrari in F1. Just over a year ago, in fact, the 12C Spider from the Woking based manufacturer put everyone in line with a time of 1:12.922. Respect!

That was not enough, though, so McLaren launched a supercar even more extreme and sharp – the 650S. The acronym is itself a warning, because the figure indicates the power levels of the 3.8-litre bi-turbo V8 (the M838T) engine. Thus, the challenger was brought over from England to test its skills as a part of our McLaren 650S and make a two-fold bang – beat its cousin, the 12C Spider, and challenge the overall lap record. Moreover, the 650S is really a complete package – starting from the turbocharged V8, to its active aerodynamics and carbon fibre chassis.

It’s not even 9am when the McLaren arrives for our McLaren 650S – comfortably, on the back of a truck. We’re there to greet her, together with our test driver, Davide Fugazza – who will take it to the limit. His facial expression, when he realizes that the car is right-hand drive, was... well, never mind. Let’s just say that he’ll need a few extra laps in order to get a feel for the right-hand drive. And so we hit the track by mid-afternoon, despite the prohibitive temperature. Whatever the conditions, the grip from the Pirelli P Zero Corsa tyres, 235/35ZR19 up front and 305/30ZR20 at the rear, is immense.

You really do have to get used to it

The car’s adjustable parameters are already in Track mode: engine, suspension, steering and gearbox are all on maximum alert. The lap times, initially, are erratic. The tester is only studying the 650S, and re-tuning his reference points – because the steering is on the ‘wrong’ side. And with the hot asphalt temperature, we mainly do the laps to prepare the groundwork for the next morning – when we’ll take advantage of the cool air and lower temperatures.

8.05am the next day is another story. The ambient temperature is 23°C, and the asphalt temperature doesn’t even reach 30°C. The driver and car are ready though – the former has meditated during the night, and the latter has got a new set of tyres. Now, we’ll also use the Airbrake – the moveable rear wing, which provides greater downforce under braking and in corner entry.

We’re all there, on the pit wall, waiting for the sequence of laps. Here’s how it went – 1:12.752, 1:12.425 and, finally, 1:12.289, which was the best time of the day. Satisfied with the British beast, the driver is happy: “It’s fabulous to drive, it gives you great response, and always with a good margin of safety. The engine is outstanding, and has great power, but it can embarrass the traction levels a bit.” What about the brakes? “The carbon-ceramics are tireless,” continues Fugazza, “and work with perfect scalability. Although, under hard braking, the rear-end gets light and needs to be corrected. Before the chicane and hairpin, however, you really appreciate the Airbrake, because it means that I can brake very hard.” Let’s talk steering now, “A scalpel for how fast and precise it is. I would have preferred it to be just a little bit heavier.” And the handling? “It’s related to how you use the brakes, steering and throttle – the 650S reacts to the slightest input very quickly, therefore, it requires precision and you need to be gradual. On the faster sections, driving a right-hand drive car, I had some difficulty finding the right lines. And if you push it too much, it results in manageable oversteer.” What about power delivery? “You need to be careful with the throttle input – the V8 is exuberant.” And the dual-clutch gearbox?  “It’s very fast, it never refuses to shift gears. Compared to the 458 Speciale, however, it doesn’t immediately engage the next gear when you hit the rev limiter. Great car, the 650S is more challenging and better than the evil 12C. And there’s more satisfaction in taming it.”

Around the track
Five-tenths off the record
Great time for the 650S – faster than the 12C, especially where its power can be used to the maximum. And it’s not far from the record holder, the Lamborghini Huracan.

When, in August 2013, we published the performance test of the 12C Spider, the ranking of the fastest cars at Vairano came out slightly altered. The McLaren settled into the top spot, leaving behind all the rest – including its cousin, the coupe (beating it by almost two seconds). But, this time, the 650S failed to conquer the top spot – even though it achieved an excellent time. It’s normal, of course, to compare it to the older 12C – which is almost seven-tenths slower. Should it be a bigger margin? Not really, since the track is only 2.5 kilometres long. So, where does the 650S gain time? Well, in all three sectors of the circuit. Yes, in all of them! A little bit less in the first, because it’s the shortest sector, but more in the last sector – with two quick corners, the tight chicane, and the hairpin. At (4), the 650S makes up time thanks to its engine. In (5), however, the 12C enters faster. But then the 650S pulls ahead. At the entrance of (8), the 12C is more aggressive and effective. On the slowest portions of the track (9 and 10), the two are on par, but the 650S gets better acceleration across the start-finish line (1). 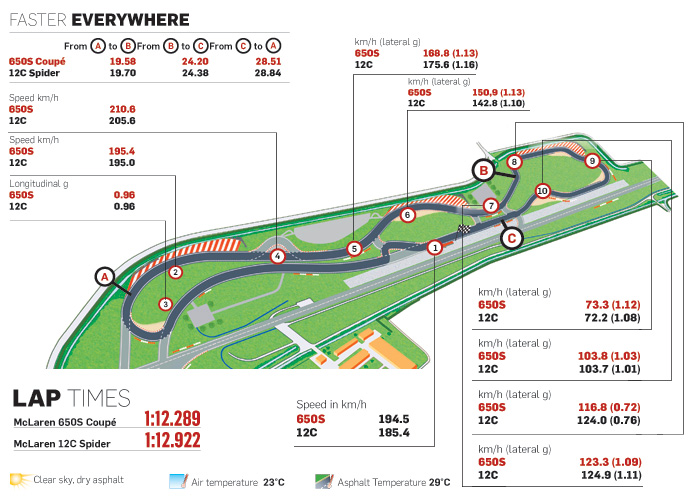 The feel of a racer

Clockwise from below: Beautiful (and expensive) carbon fibre racing seats with fixed backrests; the instrumentation is almost the same as on the 12C; the central column holds the display screen, the drive-setting buttons, and the gearshift switches

The technology
MORE HORSEPOWER AND DOWNFORCE

The 650S replaces the 12C, representing the natural evolution of the car. The basic car is the same, but with several updates. Right from the centrally mounted V8 turbo 3.8 engine with dry sump lubrication, which now boasts 650 horsepower (25 more) thanks to redesigned heads and pistons, new exhaust valves, and variable valve timing. The software of the dual-clutch SSG gearbox has been modified, and now it responds faster. And the suspension system, the ProActive chassis wishbone control, has been revised – with the ability to adjust the handling and the driving modes (Normal, Sport and Track recalibrated) regardless of the transmission mode. The chassis, inspired by the F1 car is carbon fibre – the MonoCell weighs only 34kgs. The front end is also much more aggressive, with LED headlights derived from the P1 supercar, and the rear has been redesigned as well – with a bumper split into three parts like the 12C GT3, which accentuates the rear diffuser. The front splitter, and more pronounced fins behind the front wheels, improve front grip and balance. Moreover, the Airbrake active wing is now evolved – it raises automatically when you need more downforce. In acceleration, on the straights, the Airbrake is automatically lowered to reduce the aerodynamic resistance (similar to how the DRS system in F1 works). The shock absorbers and the retuned springs offer even better steering feel that, basically, is the same as the 12C – but with a sharper and more precise feel, because of its greater aerodynamic load. Finally, the alloy wheels are about six kilos lighter than the standard 12C, while carbon-ceramic disc brakes are standard. 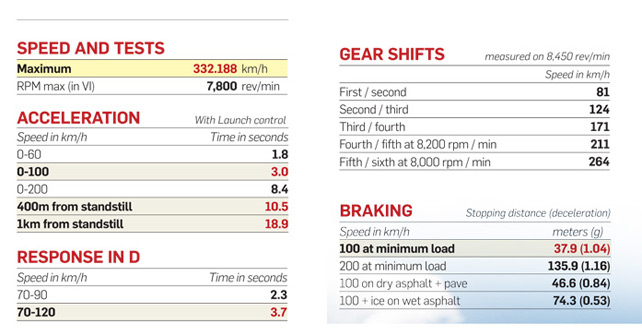