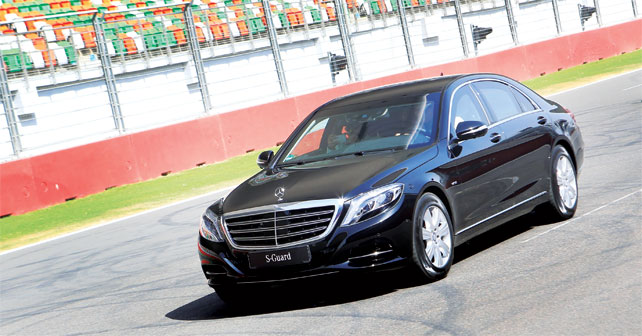 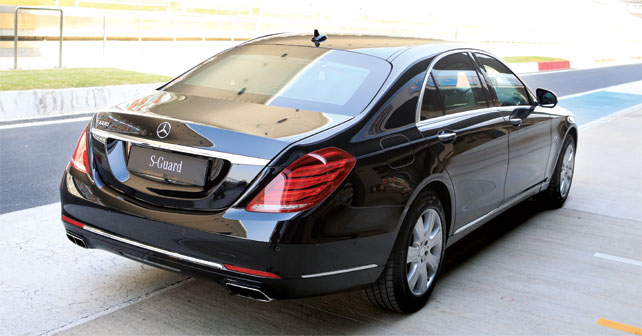 It’s not quite the ‘Beast,’ used by the President of the United States, but the Mercedes-Benz S-Guard is the next best thing if you need virtually as much protection. How is it to actually drive though?

As I talk to one of the Mercedes engineers at the Buddh International Circuit just before the launch of the Mercedes-Benz S-Guard, he jokingly tells me that only villains and rich people really need this car – because a) only they can afford it, and b) they’re the only ones someone would want dead. Well, whatever be the case, the new Mercedes S-Guard is certainly among the top production armoured cars in the world.

To start with, it’s completely bullet proof – so, unless you have a bazooka, you can’t harm anybody inside the car with just a handgun (or even a machine gun for that matter). It’s also got underbelly protection from landmine blasts. Plus, it can withstand a couple of HG85 hand-grenades. If that isn’t enough, the car also gets its own external fire extinguishers. So, if the car is ever set on fire, it can immediately extinguish it. This standard of protection is called VR-9, and it’s the highest level of protection a civilian can ask for in an armoured car.

But all this protection means that the car is also very heavy – at a massive 4,160kgs of mass. Each door itself, fitted with 2-inch thick bullet-proof glass, weighs 200kgs. So, how would you expect a car that heavy to drive? Well, that’s what we were about to find out.

Mercedes invited us for the launch of the car at the BIC, where we were also allowed to take it for a quick spin to see just what it could do. The first thing you need to know is that ordinary engineering can’t handle a car this heavy, so the S-Guard gets strengthened axles and tailor-made air suspension. To move this mass of steel, it also gets a 6-litre V12 turbo engine that produces 522bhp with a monstrous 830Nm of torque, mated to a 7-speed dual-clutch transmission.

The engine is sublime, and moves this massive mass of metal pretty effectively indeed. But once you let go of the throttle, the car doesn’t slow down in a hurry because it’s so heavy and carries a lot of momentum. You need to press down hard on the brakes, which are also incredibly powerful considering the bulk of the car.

When it comes to handling, the S600 isn’t bad at all. You can actually turn into sharp corners with great speed, and it maintains pretty good body control.

The S-Guard runs exclusively on Michelin PAX run-flat tyres that have a 28-kilometre range with zero pressure. The tyres also offer pretty good grip. However, when you really push through the corners, you do feel the weight and have to manage the speed to keep it all under control. Overall, it is pretty agile if you know what you’re doing – and it is possible to escape from danger if need be.

For a VVIP passenger though, the car is ultra comfortable and the interior is as luxurious as they come. Plus, the ride quality is brilliant – and, of course, it comes with a multitude of special features.

So, if you really need the protection, and have Rs. 8.3 crores to spend, this is the machine for you. After all, you can’t put a price on your life – now can you?