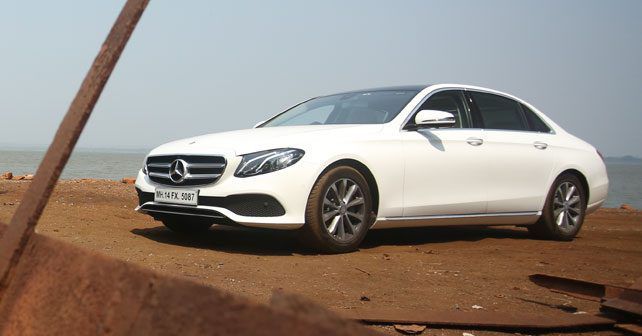 Mercedes-Benz makes a radical change in their highest-ever selling vehicle in India by focusing on the rear-seat passenger rather than the driver. So, with its extended wheelbase and enhanced luxury, can the new really E-Class tempt the Indian customer?

The E-Class holds a rather significant position in the Mercedes-Benz portfolio as far as India is concerned. Having been on sale in India for over two decades – the W124 E-Class was the first product that Mercedes sold in India upon their entry in 1996. This mid-size luxury saloon has sold over 35,000 units in the five generations that it’s been offered in India. Naturally, this makes the E-Class the highest selling product of all-time for Mercedes in India. So, as this – the tenth-generation E-Class – is launched, the stakes are high and the manufacturer can’t afford to mess up its bread-and-butter offering.

And so the boffins at Mercedes decided to change things around a bit. You see, for the Chinese market, Mercedes does produce a unique version of the E-Class that isn’t sold anywhere else in the world – a long wheelbase version. Now, if there is a similarity between the Chinese and the Indian market – and there aren’t many – it’s the propensity of luxury car owners to prefer being chauffeured around rather than driving themselves. So, for Mercedes it made perfect sense to launch a right-hand drive version of the extended wheelbase E-Class in India for its Indian customers. And, in doing so, India becomes the only right-hand drive market in the world to offer a long-wheelbase version of the E-Class. 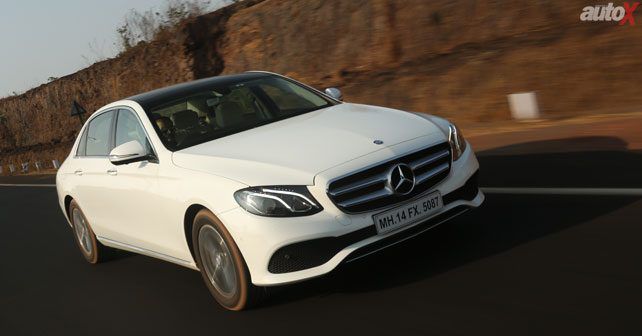 Visually, one has to appreciate the new design language that Mercedes has taken on in recent years. However, I’m not a fan of the one-design-fits-all approach that seems to now plague the sedan line-up of the brand. While the design itself is classy and lends the car serious presence, it requires an absolute anorak to differentiate between the C and E-Class at a glance. And even though I pride myself on my ability to identify even some of the rarest cars in the world, even I find differentiating between the two a tricky job.

The interior, though, feels like a place replete with top-notch quality and superb attention-to-detail. Right from the leather quality, to the leather lined dash and general fit-and-finish – it’s all class-leading. The interior design, shared with other sedans from the brand’s portfolio, is simple but very effective and suits the nature of the car. And special mention must go to the selectable mood lighting on the new E – it works exceptionally well and its integration into the whole interior design is superbly executed. Also, the new 12.3-inch central screen has superb resolution and graphics to match, with a 360-degree camera that works particularly well. Adding to this experience is the Burmester sound system – which produces 590 Watts of output from 13 speakers. In fact, with some Pink Floyd blaring, this is a car that I wouldn’t mind being stuck in traffic in. While being chauffeured, of course. 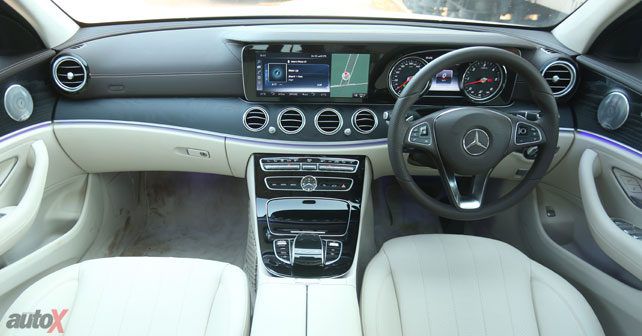 I just realised that we haven’t even touched on the most important aspect of this car – the space on offer! With a length of 5,063mm, an extension of 123mm over the standard car, the most remarkable feature of the car is the space available in the rear seat. So, being seated in the rear seat feels like sitting in a large armchair. Plus, the seats are adjustable. The recline angle can be adjusted by controls on the door – and you also get controls to slide the front passenger seat forwards or back to further enhance your seating comfort. Also, a special mention has to be made for the air suspension of the E, which truly redefines the word ‘Comfort’ – even on our dilapidated roads. So, even when dealing with broken and bumpy tarmac, the E delivers stunning ride quality despite its large 17-inch wheels. And in the Sport and Sport+ modes, the body control and the handling of the car sharpens up considerably – and the ride doesn’t suffer too much. But, given the nature of the car, we preferred to keep the car in Comfort mode and just waft to our destination in supreme luxury. Also, the air suspension on the E allows the car’s ride height to be raised when needed – which will be a big plus in our conditions.

Even though it’s targeted at the passengers, the new E still delivers a satisfying driving experience. The highlight of the new drivetrain is the new nine-speed automatic gearbox, which is leaps-and-bounds better than the old seven-speed unit. So, you get a smoother driveline with barely perceptible shifts – that are much quicker to boot. And the E350 comes as standard with steering wheel mounted gearshift paddles, which are immediate in their execution when used. The 3.0-litre V6 turbo-diesel engine also delivers a big wallop, with its 255bhp and 620Nm of torque on tap. Paired with the fast shifting ‘box, the 0-100 mark comes up in a mere 6.6 seconds – and, no matter the conditions, the car feels seriously fast with a flat torque curve that delivers fantastic mid-range grunt. Also, the NVH levels on the engine are superb – with barely any noise or vibrations creeping into the cabin. 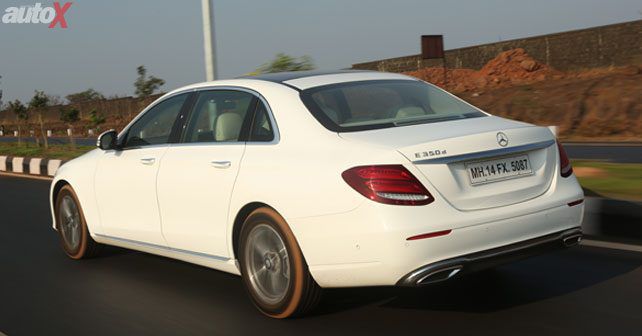 So, the E-Class has many things going for it in its tenth generation. It features gorgeous interiors and ample space inside for its occupants. Pair this with the superb sound system, wonderful ride quality and solid performance from the big engine and it makes for a superb overall package. However, everything is not perfect – there are a few shortcomings. First is the exterior design of the car, which is, to be honest, a fine piece of work. But the problem is that it looks so similar to its C and S-Class siblings – so-much-so that it’s hard to differentiate between them. Secondly, while the new COMMAND entertainment system features Apple CarPlay and Android Auto, the menu controls with the Mercedes jog dial are a bit cumbersome and feel out-dated. Third is its size, which, at over 5-metres, means the E-Class is a quite a big automobile. Again, in our traffic conditions that can be a bit of a bother – especially if you plan on driving yourself. Given its size and mass, the E-Class – in this version at least – isn’t really much of a driver’s car. It feels a bit big and unwieldy at times, as our drive on the narrow streets of Goa showed.

However, when the engineers at Mercedes set out to design the long-wheelbase version, driving appeal was perhaps not as high on the priority list as passenger comfort. And when you view the product from that perspective, there’s little to criticize about the car. It feels like a proper luxury product, which has been loaded to the gills with cutting-edge equipment and spending time in it is a truly luxury experience – as well it should be.

So, if you’re looking for a driver’s car, look elsewhere. But if you’re the stereotypical E-Class customer in India, the new car ticks virtually all the boxes that you could ask for in a luxury car. And though it’s expected to be priced at a premium compared to its competitors, the E-Class, as of now, remains the luxury car of choice in its segment. That just leaves one conundrum – with the rear seat now nearing S-Class levels of space and features, this makes justifying the premium for the larger sedan a tad difficult. The reality, though, is that whether you choose the E or upgrade to the S, Mercedes-Benz India will be laughing all the way to the bank either way. 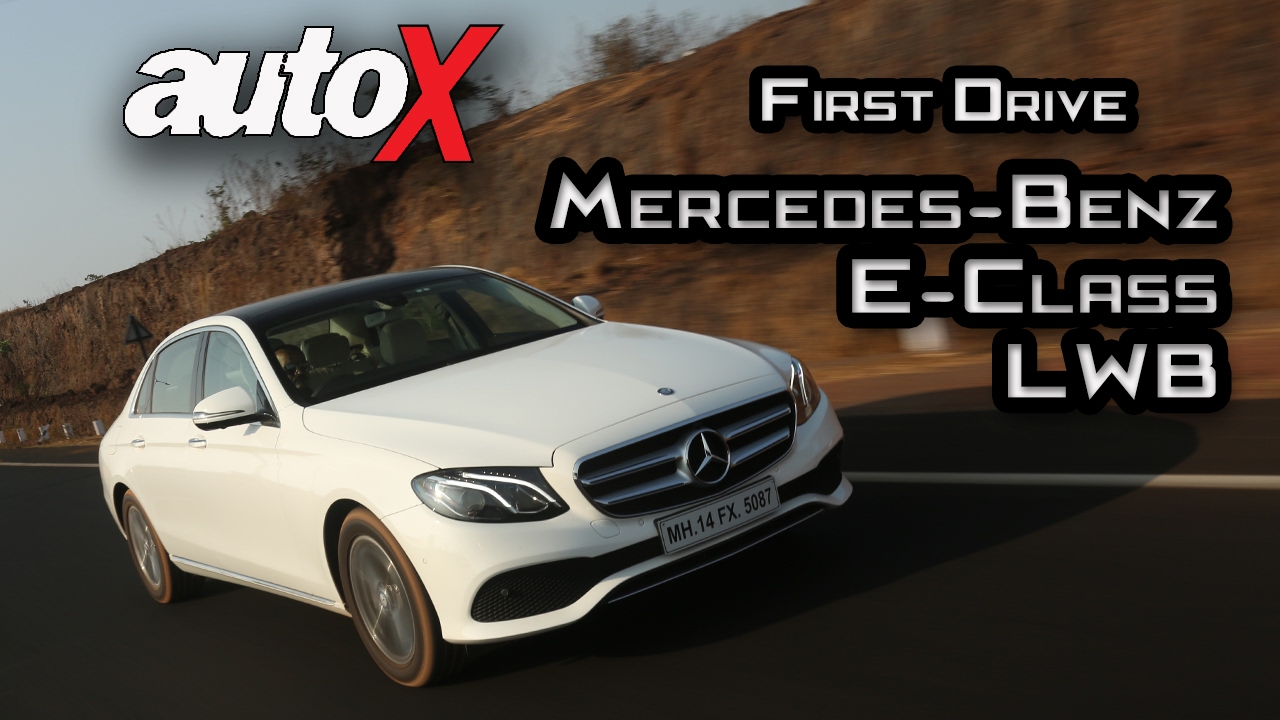