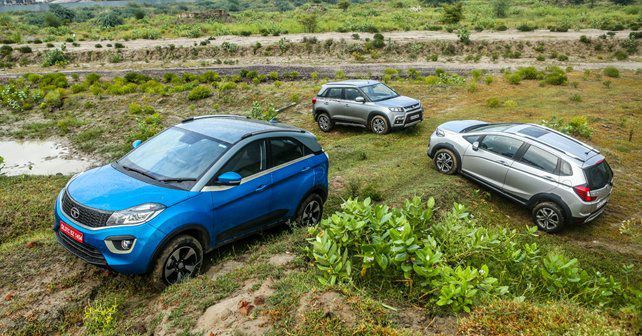 With a range of customization options, a Maruti Suzuki badge and driver focussed nature, the Brezza has a lot going for it. But there is a new kid on the block, the Nexon which is expected to make compact SUVs more affordable. We find out how it fares against the undisputed king. And while we are at it, Honda's WR-V came in to make a point for MPVs that are just as practical.

Who would have thought that we would ever say that amongst a Honda and a Suzuki, it’s the Tata that has the quietest engine with the most refined nature? But this is exactly the case in the context to this comparison. Tata has really brought its A-game with the Nexon. Slated for a launch soon, the Nexon will be the home-grown carmaker’s first take on the compact SUV segment.

Now, if you remember correctly, Tata is the true pioneer of the ‘compact big car’ theme with the Indigo CS way back in 2008. In recent times, with the launch of the Tiago and Tigor, Tata has re-emphasized its position in the compact car game. Taking things much further, though, is the Nexon – which comes with a brand-new engine, Tata’s very own 1.5-litre diesel motor. 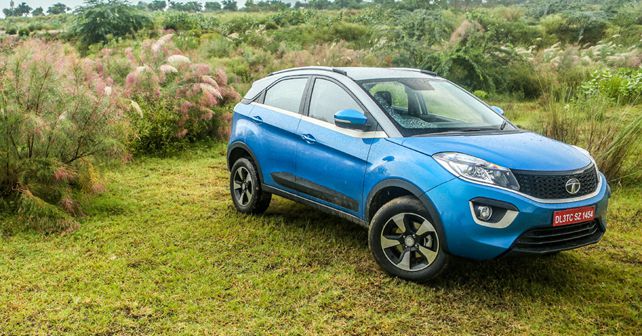 What’s under the skin is as impressive

And while the striking looks of the Nexon draws attention from ogling bystanders everywhere, the real star of the show here is the engineering. For once, it’s really good to see an Indian carmaker come out shining on this front. Right from the moment you fire up the engine, it becomes clear that this is the quietest engine amongst Suzuki’s Fiat sourced 1.3 MultiJet and Honda’s 1.5 i-DTEC. As you let go of the lightest clutch here, the Nexon sets off in a very refined manner. And if you’re light on the throttle, you don’t even notice the turbo kick in at around 1,700rpm. On paper, a healthy 260Nm of torque is spread between 1,500 and 2,750rpm. In fact, if you drive reasonably, within the city, the light clutch and steering – along with linear power delivery – makes this car very convenient to drive in traffic. And when the road does open up, the Nexon won’t let you down in Sports mode – allowing you to easily access all of its 108bhp at 3,750rpm. When you start driving it fast, while turbo lag has been well masked, you can feel the turbo kicking in as you surge forward with renewed vigour.

That said, the motor does have a few problems though – the most serious of which is a very disconcerting vibration that you can actually feel through the steering wheel all the way from 2,700 to 3,300rpm. This subsides as the revs rise, but then the motor runs out of breath around 4,000rpm. If you ignore this minor vibration, however, the power comes on strong in the mid-range. Plus, the whole car feels very balanced and will take wide sweeping highway bends with confidence – even if they’re incorrectly banked. Push it, and it will nudge the 180km/h mark on the speedometer in sixth gear. The gearbox itself is light to operate, but could have smoother shifts. Meanwhile, the brakes provide good stopping power – although with very little feel. The only other fly in the ointment is the completely wooden steering, which has been a Tata Motors bugbear since inception.

I have to say, though, despite this, the Tata Nexon certainly impresses when it comes to build quality, driving dynamics and high-speed stability.

In comparison, the Brezza’s powertrain now feels a little dated. Turn on the ignition, and there’s a distinct clatter from the diesel engine – more so during cold starts. The clutch action is quite heavy and the gearshifts are long and require more effort. Then there’s the issue of turbo lag, which is much more pronounced here under 1,750rpm – which is the typical trait of this motor. But, once the turbo kicks in, the Brezza – despite being less powerful – feels faster and this tried-and-tested motor begins to shine, demonstrating why the MultiJet 1.3 is India’s favourite diesel engine. The engine revs cleanly to 4,000rpm, and the Brezza feels faster than its latest Tata rival thanks to the fact that it’s 100kgs lighter than the Nexon. However, it’s worth noting that the Brezza tops out at 160km/h (indicated). Another problem in the Brezza is that the engine becomes quite loud at three-digit speeds. In contrast, in the Nexon, you can cruise comfortably at 100km/h with barely any engine noise – although there is a fair amount of wind noise from the top of the side windows. 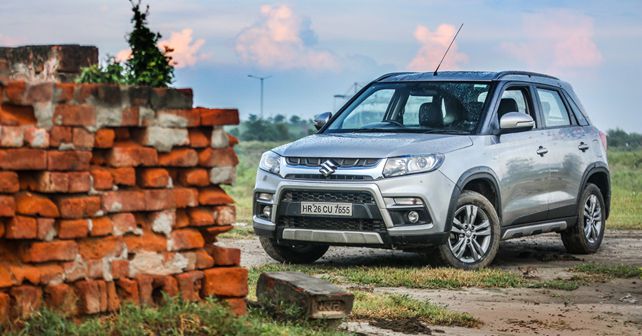 But when it comes to handling and braking feel, the Brezza is in a class of its own. With a stiff suspension setup, the Brezza is an absolute blast to throw around corners. You can have all four tyres howling for grip around a corner, and yet to can feed in even more power to make this compact SUV even more playful around the bends. This thing is an absolute blast on a handling circuit! The steering wheel has much better feedback too. Unlike in the Nexon, you feel far more connected to the car. Sadly, though, there is a price to pay for its brilliant handling in terms of ride comfort. Especially at the rear, it gets quite bumpy for rear seat occupants over broken or wavy roads.

But if it’s comfort you want, the WR-V is the place to be. It has an especially cushy ride that’s really well suited to our roads. It’s even more comfortable than the Nexon. The additional ride height of the Nexon, which helps it off-road, means that Tata has had to firm up the suspension slightly to maintain good body control. The WR-V, though, simply dismisses patchy tarmac and large potholes without ever transmitting any of this back to the occupants. 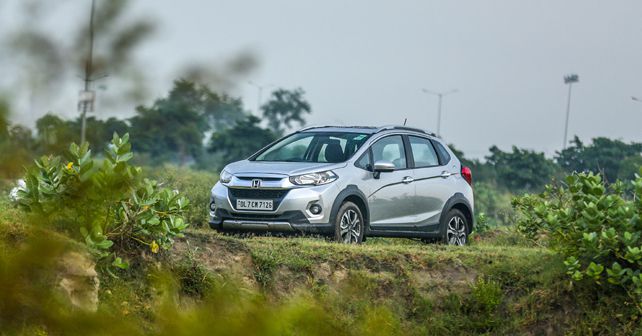 And because the WR-V is the one here that’s more obviously based on a hatchback, it’s that much easier to drive in traffic. The car feels very light to drive, with nimble controls and steering. Honda, for its part, must be appreciated for slowly, but surely, improving the levels of refinement of its 1.5 i-DTEC engine. I used to have a long-term diesel Honda Jazz, and I can tell you this that the new WR-V feels much more refined from behind the wheel. It has a very light clutch, and the lightest and smoothest gearshift on any car, anywhere – all of which matters when you have to brave through rush-hour traffic everyday.

The WR-V slots in between the Brezza and Nexon on the performance front, with 98bhp of power. But Honda’s focus with this engine has always been fuel economy, and on that front the WR-V is the most efficient car here. And while there’s nothing wrong with its real world performance, it is the slowest accelerating car in this test. Still, once the turbo kicks in, with 200Nm of torque being available at 1,750rpm, the WR-V offers you decent mid-range performance without compromising on fuel efficiency.

If you think about it, if you want a compact diesel machine, there are so many options on the market today. But the current crop of compact SUVs and crossovers gives you the added practicality of having more than enough ground clearance for those adventurous weekend getaways. Even if you never take one, you’ll be safe in the knowledge that you can throw a tent in the back of any one of these and kiss the city goodbye anytime you like! 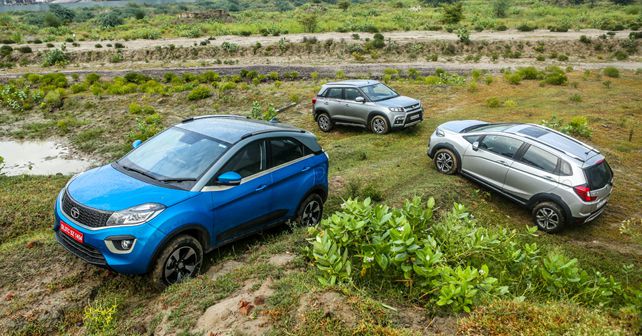 The Nexon gets the glances

The WR-V is the least outdoorsy of the lot. It’s not trying to hide its hatchback roots, and is the most comfortable machine here for the daily commute. It’s also the most practical, with the biggest boot, lots of rear-seat room, and a sunroof. The Nexon, meanwhile, looks like a million bucks. It looks like it drove straight out of the Auto Expo show floor to get its boots dirty for this test. Pratap Bose and his team have done an incredible job creating a machine that looks like nothing else on the road today. The Brezza, meanwhile, looks the most like a conventional SUV – and that’s perhaps what’s led to much of its success thus far. It also has the most options available for you to customize your very own Brezza in any number of ways.

The Brezza keeps its crown

When the Nexon goes on sale, expect it to be priced very competitively – quite likely making it the most affordable compact SUV on sale. This means that the Nexon will not only offer style and novelty, but also practicality and affordability. The only question mark against the Nexon will be reliability – as new models from Tata are notorious for being plagued with quality control issues. And it’s for this reason alone that the Brezza retains its crown – because it’s a sure-shot. With Maruti’s reliability and after-sales network, you simply cannot go wrong. Plus, it feels more sorted from behind the wheel. But the Nexon will mount a far greater challenge than anyone at Maruti-Suzuki could have imagined. It’s original, feels sturdier and better built, and proves that Tata Motors will once again be a force to reckon with in the Indian market. Just for its novelty value alone, the Tata will sell extremely well – it’s just that the Brezza will continue to sell even better!

X-factor: Grabs eyeballs everywhere, which is not surprising since it looks as though its driven straight off the floor of the Auto Expo.

Cons
• Tata reliability is always a question mark.
•  Engine vibration in the mid-range.

X-factor: The most car-like, and refined, crossover on the market – also the most fuel efficient.

Cons
• Feels car-like, not SUV-like.
• Tuned for efficiency, not performance. 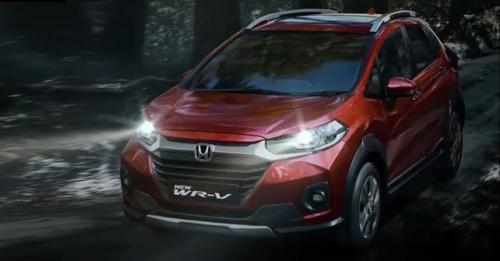