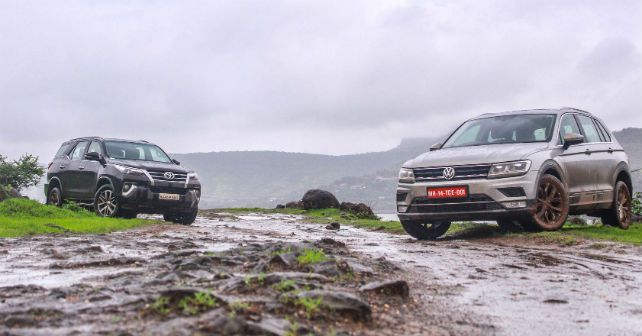 Countless stories of how an underdog beats the master of the game have been told. Will this be another one?

Volkswagen made us wait for a long time before launching the Tiguan in India. And when it finally arrived, it had most of us scratching our heads wondering which SUVs it competes against. You see, for the price that you pay for a Tiguan, you could also get your hands on entry-level luxury SUVs like the BMW X1 and the Mercedes-Benz GLA. But, at the same time, the Tiguan is also similarly priced to full-sized SUVs like the Toyota Fortuner and the Ford Endeavour.

So, in this comparison, we decided to pit the new kid on the block against the all-time SUV king – the Toyota Fortuner. Now, considering one is a 5-seater, while the other seats seven, some might argue that this is an apples-to-oranges comparison, but in this article we’re simply addressing the concerns of those who are doing some fruit shopping as it were – after all, your options in the market are plenty. But if you’re looking only for a 7-seat SUV, I suggest you get onto our website and read our Toyota Fortuner, Ford Endeavour and Isuzu MU-X comparison. If not, read on. 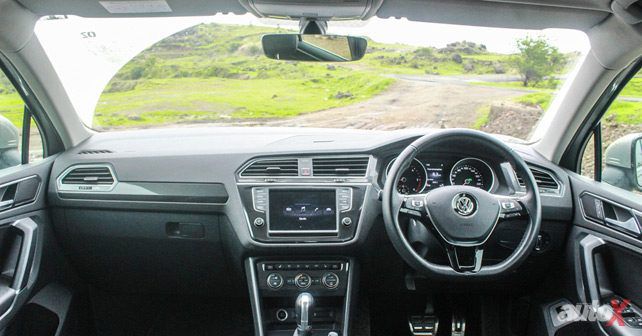 The first thing that you notice when you see both cars in the flesh is just how different they are in terms of size. The Fortuner is 4,795mm long and 1,835mm tall, which makes it considerably larger than the 4,486mm long and 1,672mm tall Tiguan. Width, however, is more or less similar at 1,839mm and 1,855mm respectively. When parked next to each other, the Fortuner easily outsizes the Tiguan. But, that aside, the latter is by no means small. The Tiguan’s wheelbase is 2,677mm. The Fortuner’s wheelbase, on the other hand, despite being a 7-seater, is just 68mm longer than its rival. Toyota has tried to make more space at the back by fitting it with an adjustable second row. And while that does provide decent enough legroom, there is literally no headroom at the back – even for a person of average height, making the third row best suited for children.

Being a 5-seater, the Volkswagen feels a lot nicer in the second row. Although legroom is sufficient in both models, the Tiguan certainly feels more comfortable – and that’s because of better under-thigh support and the flatter seatback for the third passenger. The Fortuner’s seat back has a little hump, and the front central armrest juts into the space on the floor in the second row – due to which the third passenger in the second row has to sacrifice a fair amount of room. So, while the Toyota attempts to overachieve, the Volkswagen excels in doing what it does.

In terms of features too, the Volkswagen has a longer list to flaunt. Tyre pressure monitoring system, three-zone climate control, front and rear parking sensors, memory function for an electrically adjustable drivers’ seat, lumbar support and panoramic sunroof are some of the features that aren’t on the Fortuner. But the most useful one among them is possibly the self-sealing tyres that the Tiguan comes fitted with. In terms of safety, both cars come with airbags, ABS, EBD and traction control. The Fortuner does, however, gain an edge being a full-fledged 4x4, as opposed to the Tiguan – which is a front-wheel-drive-based all-wheel drive system. And while it does get off-road modes like Snow, Off-road and Off-road individual, it’ll likely find it hard to follow the Fortuner into uncharted territory. A lot of that has to do with the fact that the Tiguan’s minimum ground clearance is 149mm, while that of the Fortuner is 184mm. As far as quality goes, the overall finish on the Tiguan makes it feel better built. 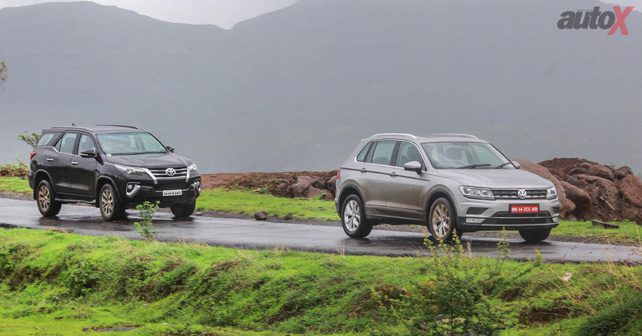 Look at the specs of the Fortuner and the Tiguan and you’d think that the Toyota packs more punch. The Japanese SUV makes 174bhp and 450Nm from the same 2.8-litre diesel motor that powers the Innova Crysta. Its German rival gets Volkswagen’s bread-and-butter 2.0-litre diesel that makes just 141bhp and 340Nm. No doubt there is a notable difference in the power and torque figures, but the Fortuner also weighs considerably more than the Tiguan, which somewhat balances the equation. On the road however, the Tiguan feels a lot more free-revving and eager. There is a bit of lag lower in the rev range, but since peak torque kicks in at 1,750rpm it more than makes up for it. The Tiguan feels extremely refined and the 7-speed DSG that it comes with makes it even more fun to drive. More than enough has been said about the smoothness with which this gearbox operates, and this is no different in the Tiguan.

The cabin is well insulated, and filters out the noise from the diesel motor fairly well. Drive the Fortuner immediately after, and it does feel a bit sluggish and gruff. It gets a power mode that makes it feel quicker, and it holds onto gears almost all the way up to the red line. But, in the normal mode, the revs don’t climb quite as easily – and when they do, the engine tends to groan about it. The Fortuner’s 6-speed auto-box is neither as fast nor as smooth as the DSG, which also robs it of some of its performance.

As far as the suspension goes, the Fortuner is set-up on the softer side – which means that it cushions broken roads at slow speeds, but it remains quite bouncy over uneven surfaces. Meanwhile, the Tiguan is firmer – which means that you certainly bare the brunt of bad roads, but it’s certainly the more composed of the two. But, unlike the Fortuner, you can’t power through rough roads. That said, it has very impressive handling dynamics – which make it quite a bit of fun to throw around (if that kind of thing makes you happy). Lateral movement is well controlled in comparison with the Fortuner, so you have the confidence to push the Tiguan much harder. 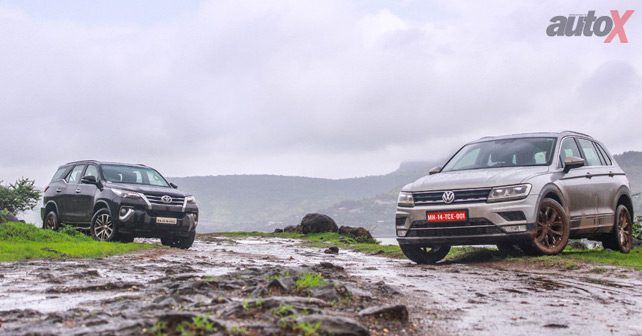 The battle between the Tiguan and the Fortuner brings to mind the Biblical yarn of David versus Goliath. In terms of sheer size and street presence, the Fortuner clearly has an edge over the Tiguan. On paper, it also makes more power and torque, and comes with a low-range four-wheel drive system. But, most importantly, it wears the Toyota badge – which translates to affordable maintenance and bulletproof reliability. And it’s because of these very factors that the Fortuner entered this comparison as the favourite. Moreover, priced at Rs.29.83 lakh, the Tiguan does demand more moolah than the Rs.29.18 lakh price tag of the Fortuner (ex-showroom). With that in mind, the Volkswagen will find it hard to compete with the Toyota on the sales charts. But, as an SUV that you can drive everyday, the Tiguan is far more refined and drivable. Plus, it’s better built and packs more features. In an ideal world, then, you would use the Tiguan for the everyday commute and the Fortuner for the weekend getaway. In the real world though, despite the fact that the Tiguan is more refined and rewarding, it’s very hard to recommend anything over the Fortuner – because the Toyota will handle absolutely everything you (and the family pet) can throw at it and it’ll come back asking for more. Time-after-time-after-time. After time…

X-Factor: Refined, great to drive and loaded with features, the Tiguan ticks all the right boxes if big isn’t your thing.

X-Factor: If it’s peace of mind and go-anywhere ability you’re after, then the Fortuner is your default choice. 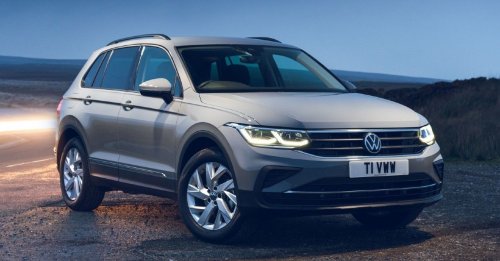