Army of One: Himalayan Odyssey 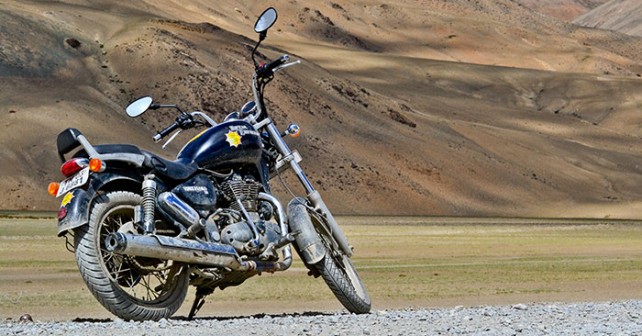 T he only way you can really understand the magnitude and sheer mass of the Himalayas is when you look down upon them from the sky, as I did on my flight from Delhi to Leh. To think that for millennia people have crossed these massive mountains for the sake of trade and education, and over time certain people have even settled in the most hostile conditions, is something that gets my imagination going.  Speaking from a strictly philosophical approach, the mountains is where most people retreat to find peace through its serenity, calmness, and for obvious reasons because you feel closer to the heavens as you sit above the muck of the world. There is however another group of people who venture to the mountains to attain a very different kind of peace and calmness through adventure, thrill, risk and challenge.

This was the reason I was on that flight to Leh – I was on my way to meet a group of people who decided to attain this inner-peace together on one of the most epic journeys one can experience on a Royal Enfield. If you didn’t already know, motorcycling is a religion and it does not discriminate. People from all walks of life and with different backgrounds come together, they might even have different ideals and beliefs but it does not matter, because as long as they have the same passion nothing can separate them. And for Royal Enfield enthusiasts the Himalayan Odyssey is their holiest of pilgrimages.

This was the 10th edition of ‘The Odyssey’ – as most riders call it – and so there was cause to celebrate. For the first time 100 riders were going to take part in two separate groups. Both groups left from Delhi to take separate routes upto Leh and then from Leh they would switch routes and come back to Delhi, all-in-all covering a distance of more than 3000 km in just 2 weeks.

When I arrived in Leh, as always, I was greeted by altitude sickness, but I was able to shrug it off because I was more excited, than in pain. The group of riders I joined were following ‘Route A’ which meant that they had already ridden from Delhi to Manali before reaching Leh, and on the way back they would cut through the Spiti Valley before heading to Narkanda and then back to Delhi. However, since I joined them in Leh I was looking forward to Spiti, since I’d never visited the region before.

My group consisted of a very diverse group of young and old riders. I got along with everyone just fine but a certain set of the people stuck with me throughout the ride – a young teenaged engineering student from Chennai, a Captain in the Merchant Navy, a Goan adventure junkie, a witty and funny Englishman who used to be a technician for Triumph, an easy rider from Nepal, and a Japanese biking legend who holds some kind of world record.  Then there was the Royal Enfield team of Sachin, Adarsh and Aakash. Each day as we rode it began to feel like we were all a part of a big family, despite the fact that I had just met all these guys.

Riding through the rough terrains of the higher Himalayas is no easy task. The roads are always changing and you will find yourself riding on tarmac, gravel, rocks, sand, and sometimes crossing streams and rivers – sometimes the road itself becomes the river. You definitely need to have some sort of riding experience and skill level to take on the world’s most dangerous roads.

My first leg of the journey back to Delhi was a 160 kilometer ride from Leh to TsoKar – one of the highest saltwater lakes in the world. The roads leading out of Leh are very nice and mostly tarmac but once you start the ascent to Tanglang La – one of the highest roads in the world – you will start to encounter patches of rocks, mud and slush, with massive snow walls just a few feet away from you. The scenery is magnificent but you would much rather keep your eyes on the road because one little mistake will cost you dear. The decent from Tanglang La – by the way ‘La’ means ‘pass’ in Tibetan – takes you on gravel roads all the way to the Morey Plains where in some parts you will be back on the tarmac but mostly just long straight roads with loose stones and gravel.

The riders ride at their own pace, some like to ride fast, other like to cruise along, some stick together and some are in competition to be in the front. But there are always regrouping points and whenever we continue the ride we ride as one massive contingent. Everyone notices us and everyone salutes us. We are an army of one, bikers united, brothers in arms. You will find all kinds of Royal Enfield bikes in such a parade. One rider was riding a 1962 Bullet that was in perfect condition. Some riders had modified their bikes, with mud guards, exhausts, tyres and better forks and suspension setups. But most of the bikes were stock models the majority being Classics. Luckily for me I was on the new Royal Enfield Thunderbird 500 and this was definitely the perfect ride for me.

As we banked off the Morey plains towards TsoKar the road disappeared and we had to make our own roads for the last 5 km. Once we arrived we settled in our tents and braved the cold night with a hot meal and the most beautiful starlit sky any of us had ever scene. The next day we had received news that the roads into Spiti past Kaza were washed out by floods so we would have to alter our route.

We got back onto the Morey Plains for a 230km ride towards Keylong where we would stay the night. This time the weather was more forgiving and we made merry at camp, each rider with their own poison gathered around a fire as we shared stories and laughs. The dawn broke and we geared up for what we expected to be the highlight of our trip – the road to Kaza. Unfortunately, when you ride in such harsh conditions the environment doesn’t always go in your favour and neither do the reckless drivers of other vehicles. For us, our luck turned as a truck had gotten stuck on a piece of road that was about to collapse. What made matters worse was that 7 of our men were in front of the truck while the remaining 40 of us were behind it. We then had to backtrack towards Rohtang Pass and head towards Manali where we would rest for 2 days and wait for the arrival of the lost riders. They made it back safely the next day and we all celebrated the reunion.

What seemed like a heavenly rest in the calm sunshine of Manali, quickly turned to a nightmarish rainstorm the day of our departure. We were to ride from Manali to Narkanda by climbing Jalori Pass. This was a 280km ride and it was one of the most challenging and enduring as we rode through heavy rain and thick fog through some of the slushiest and muddiest roads. We managed to reach Narkanda well into the evening and we all rested very well.  The next day was just as bad, but only this time we were on tarmac the whole way to Parwanoo, which was another 160km ride through heavy rain and thick fog. The rain continued up till the following day, which was the last day of the ride. However, the rain stopped just as we departed and for the whole ride back to Delhi the clouds covered the sun’s heat and not a drop of rain came down on us.

The 2013 RE Himalayan Odyssey was perhaps one of my most fun rides. It was the first time I rode with such a large group of riders. I had made many friends and shared countless number of experiences with people who were so different than me but we were bound together by the same passion. For any rider completing the Odyssey is testimony of their skill, courage and endurance, and just like an army of one, we had all achieved something magnificent.