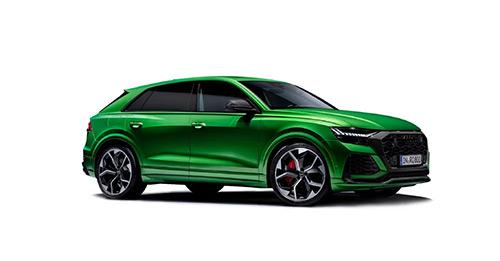 Audi India, for the first time, has brought the sportier version of its flagship SUV, the Q8, in our marketplace, touting it as the RS Q8. Given the Audi RS Q8 price, it is, as of mid-2020, the manufacturer’s flagship product in the Indian market.

For those of you who may not know, the RS Q8 is not just the sportier-looking derivative of the standard Q8, for it’s also faster and sprightlier than its sibling. So much so, the RS Q8 isn’t just Audi’s quickest SUV, it’s also the world’s fastest SUV!

Based on the standard Q8, the Audi RS Q8 new model gets a number of changes to justify its sportier intentions. All the changes here include revised front and rear bumper with sportier bits, revised grille, roof spoiler around the back, rear diffuser, quad exhaust, larger 23-inch rims, and so on.

The Audi RS Q8 variants are as follows: 4.0L TFSI. As far as the equipment is concerned, the RS Q8 packs everything that its smaller sibling gets, like, for instance, the main highlight on the equipment list here remains to be the dual-touchscreen layout on the centre console, which is exactly the same as in the standard Q8. For the extra Audi RS Q8 on-road price, you do get larger 23-inch alloy wheels and many RS-specifics inside the cabin, which we’ll discuss in the interior section below.

As opposed to the standard Q8, the RS-derivative gets many RS-specifics inside the cabin, which includes an RS steering wheel, RS-specific drive modes, RS-specific graphics for the infotainment, sports seats at the front, and digital instrument screen. The rest of the interior remains unchanged, which means it still remains to be a practical roomy SUV despite its sportier intentions.

The Audi RS Q8 comes powered by a 4.0-litre twin-turbo V8 petrol engine, which is good for 591bhp and 800Nm of torque. It comes mated to an 8-speed automatic transmission as a sole fitment. Audi claims that the RS Q8 can reach 100km/h from a standstill in just 3.8 seconds.

It's good news for performance SUV aficionados! The conqueror of the 'Green Hell' is all set to launch in India on 27th August 2020. For those not aware, the Audi RS Q8 wears the crown of....

Customers can book the RS Q8 either at Audi dealerships or on the brand’s official website by paying a minimum amount of Rs 15 lakh. The RS Q8 holds the record as the fastest SUV around the....

With a 591bhp 4.0-litre twin-turbo V8 under the hood, the RS Q8 is the most powerful Audi SUV to be developed and sold. The RS Q8 holds the record of the fastest SUV around the....