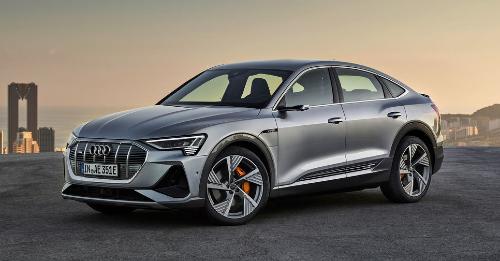 Therefore, for the most part, it looks similar to its lesser sibling – at least when viewed from the front, that is. However, it gets a new silver element in the lower half of the bumper. Moreover, it gets a sloping roofline C-pillar forwards for that typical SUV-Coupe look.

On the inside, the e-tron Sportback is virtually identical to the standard e-tron. This means, it also gets a dual-touchscreen setup, along with optional virtual side mirrors. The headroom at the rear and boot space, however, is a touch lesser than the standard car.

Powering the e-tron Sportback is the same setup as the e-tron, meaning a 95kWh battery pack will power two electric motors on each axle, which will produce a combined output of 402bhp and 664Nm. It is expected to offer a range of about 400km on a single charge.

Expect the Audi e-tron Sportback to arrive in the Indian market alongside the standard e-tron, which is expected to be in the first half of this year.

Say hello to the swanky new Audi Q4 Sportback e-tron Concept. It's based on VW's MEB platform and is expected to go on sale in global markets from 2021. It's powered by a pair of electric motors,....