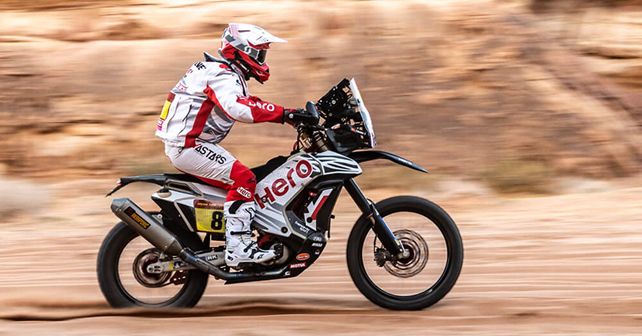 Stage 5 of the 2020 Dakar Rally ran from the city of Al-ʿUla to Ha’il, switching over to more open sandy terrain as compared to the earlier rocky surface. The 564km stage (353km Special Stage) allowed Indian rally outfits to hold their ground or in some cases, even improve upon their overall rankings. Sherco-TVS riders Adrien Metge (#11), Lorenzo Santolino (#24), and Johnny Aubert (#20) continued to chase the overall top-10 with strong top-20 stage finishes (Santolino finished the stage in 15th, followed by Aubert in 16th & Metge in 17th). With this, Metge & Aubert continue to hold 11th & 16th overall, respectively, while Santolino has dropped back a place to 15th overall. 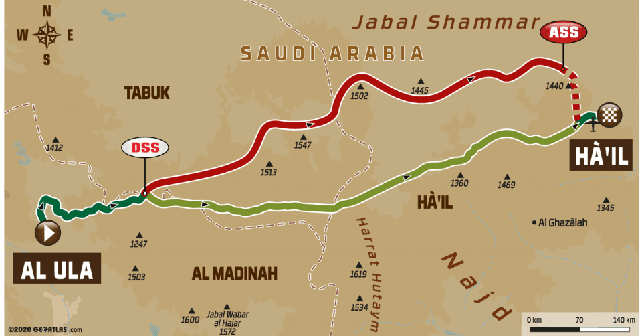 Hero MotoSports' Paulo Goncalves (#8) continued to impress as he managed to deliver a second consecutive top-10 stage finish, this time taking the final spot in the top-10 group. The 10th place stage finish has pushed him up to 59th overall, a significant improvement 83rd. Goncalves' teammates Sebastian Bühler (#32) & CS Santosh, despite stage finishes outside top-20, managed to improve upon their overall rankings as well, with Bühler up to 18th from 20th overall and Santosh cracking top-40 with 39th overall.

In the overall rankings (Bikes), Red Bull KTM rider Toby Price became the first double stage winner of the 2020 Dakar Rally by securing victory in Stage 5. This has pushed him up to second overall, behind a very consistent Ricky Brabec (Moster Energy Honda). However, Price has managed to break the Honda 1-2-3. Brabec, despite finishing the stage in fourth, still holds the lead with his teammate Kevin Benavides dropping a place behind to third overall. Both Honda riders Benavides & Jose Cornejo Florimo faced issues in today's stage, which gave Price the ultimate advantage to edge ahead. Meanwhile, Price's teammate Sam Sunderland was struck by more bad luck as his 2020 Dakar outing came to a close today after a heavy crash. He has sustained shoulder & back injuries that have ruled him out of the competition.

In the Cars category, X-Raid Mini buggy driver Carlos Sainz once again asserted his dominance with a second stage win in the 2020 Dakar Rally. With this, he has extended his overall lead over Toyota Gazoo Racing's Nasser Al-Attiyah (who continues to hold second overall). Sainz' teammate Stephane Peterhansel, despite being bogged down by a puncture, holds a comfortable third place overall. Al-Attiyah & Peterhansel finished Stage 5 in second & third as well, respectively.