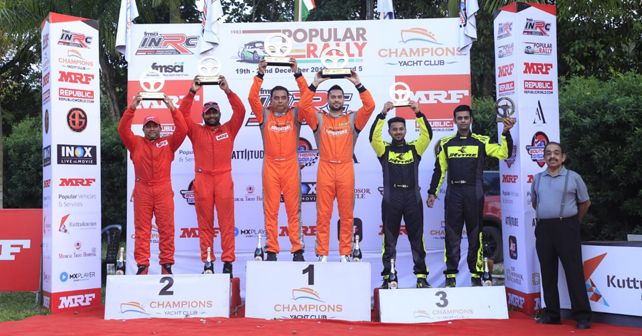 Three-time Asia-Pacific Rally Championship (APRC) winner & six-time Indian National Rally Championship (INRC) winner Gaurav Gill, along with his navigator Musa Sherif, seems to have put the unfortunate INRC Rally Jodhpur incident behind him as he drove at his best to secure a thumping victory in the final round of the 2019 INRC season – Popular Rally – that took place in Kerala this weekend. This was the duo's fifth consecutive Popular Rally title. The JK Tyre-backed driver led throughout Day 1 of the rally to gain an unassailable 55-second lead. This meant that he only had to finish the rally, without any incidents, to win comfortably.

Team Champions’ Dr Bikku Babu (with co-driver Milen George), a local favourite, finished behind Gill & Sherif in the overall INRC category. However, Babu's strong performance earned him the top spot in the INRC 2 category. Tied with JK Tyre-backed Dean Mascarenhas (with co-driver Shruptha Padival) on 72 points at the start of the round, Babu & Geroge's INRC 2 win seems to have cemented their hold on the 2019 INRC 2 title. While Mascarenhas & Padival finished 3rd in the overall rally, Suhem Kabeer and Jeeva Rathinam, who also happen to be backed by JK Tyre, finished in fourth place overall (P3 in INRC 2 category).

As for the overall 2019 INRC crown, the Bengaluru-based Team Akshara driver Chetan Shivram (with co-driver Dilip Sharan) took top honours, thanks to his stellar Round 2 (Rally of Coimbatore) and Round 4 (K-1000 Rally Bengaluru) victories this season. It's worth mentioning that Shivram & Sharan could have also secured this year's INRC 3 title, if not for the serious crash they endured early on Day 1 of the Popular Rally. Despite the crash though, the duo managed to return on Day 2 of the Popular Rally to protect their lead. A determined drive through the final three stages on Day 2 earned the MRF-backed team a respectable fifth-place finish, right behind Kabeer & Rathinam.

Team Champions' Fabid Ahmer & Sanath G finished second in the INRC 3 category, which seems to have guaranteed them the 2019 INRC 3 crown.

Listed below are the respective category winners and runners-up for the 2019 Popular Rally: