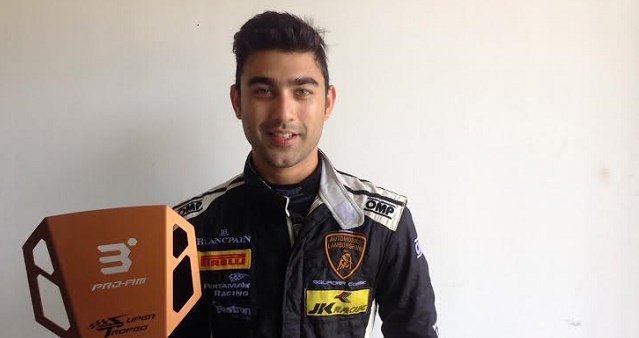 Armaan Ebrahim and Sri Lankan teammate Dilantha Malagamuwa surged to the lead of the Asian Lamborghini Super Trofeo Series standings after securing a podium finish at the Shanghai round on Sunday.

Changing weather conditions caught out Ebrahim and Dilantha in qualifying, with the Indian-Sri Lankan pairing reduced to fifth and sixth respectively for the two races.

Weather only got worse as the race began with torrential rain hitting the Shanghai International Circuit. However, Ebrahim thrived in the treacherous conditions and moved up to third place, before handing the car to teammate Dilantha who retained his position to finish on the podium

Ebrahim’s heroics continued in the second race when he made up for his first corner incident - that dropped him to 18th on the grid - to move up to third position, before teammate Dilantha spun with a few laps to go, dropping the duo to fifth at the chequered flag.

Following his podium result, Ebrahim said: “The conditions were very difficult and it was a gamble to get the set up right for the type of track conditions that prevailed. Starting 5th on the grid and passing the cars ahead was difficult as the water spray from the cars in front kept me almost blinded throughout and with the rain getting harder, the car was aquaplaning quiet badly which allowed the leader to pull away. Given the situation we were in a 3rd place Podium was a good result to walk away with and earn vital Championship points to try and keep our lead in the Championship.”

Armaan Ebrahim heads to the Malaysian round of the Asian Super Trofeo Series with a four point advantage over his closest rivals, Davido Rizzo and Anthony Liu.