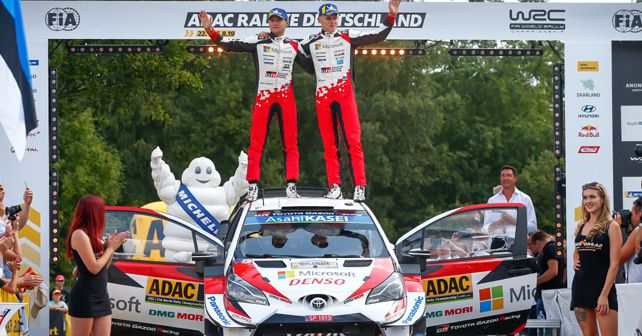 Toyota Gazoo Racing (TGR) reaped huge benefits from the competitors' misfortunes, as the Japanese racing outfit outgunned the rest to secure a stellar 1-2-3 finish at this year's Rally Germany.

With his third consecutive ADAC Rallye Deutschland victory, Toyota's frontrunner Ott Tanak inches closer to perhaps his maiden FIA World Rally Championship title. The Estonian now sits atop the leaderboard with a lead of 33 points over nearest rival Thierry Neuville (Hyundai Shell Mobis WRT). Meanwhile, Citroen Total WRT's Sebastien Ogier & Julien Ingrassia are still competing for the second spot on the leaderboard – with 165 points, they are only 7 points behind Neuville & Gilsoul. Coming back to Rally Germany classifications, TGR's Kris Meeke & Sebastian Marshall claimed the second spot on the podium. It is worth mentioning that this was their first podium finish of the season. The final step of the all-Toyota podium was bagged by Jari-Matti Latvala & Miikka Anttila. 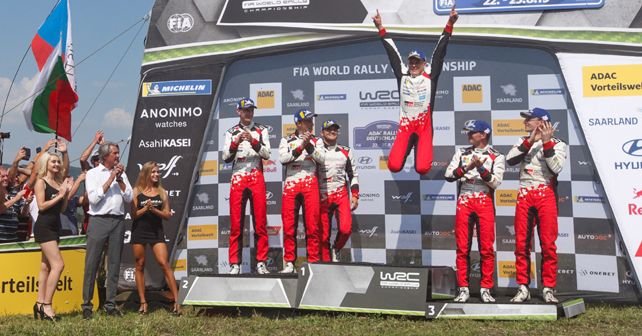 The defining moment of Rally Germany proved to be the iconic & challenging Panzerplatte 1 Stage (SS13). Till the end of SS12, Tanak was leading the pack with Neuville behind by just 5.6 seconds in second & Ogier, behind by 34.6 seconds, in third. However, the 41.17km special stage proved to be extra challenging for Tanak's rivals. While Neuville suffered a chance puncture on his rear-left in the opening minutes, he dropped back to seventh. Ogier, suffering from understeer throughout the rally, dropped back to fourth, which allowed the TGR drivers Meeke & Latvala to take second and third, respectively. 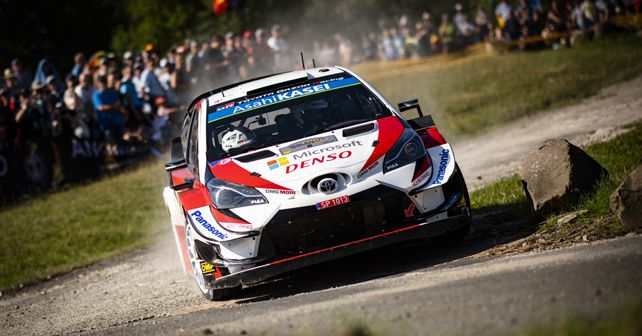 While the top-three order remained unchanged till the end, places & positions were ever-changing at the back. While Neuville recovered himself to fifth behind teammate Dani Sordo, things only went downhill for Citroen's Ogier. A stalled engine in SS14 & a puncture in Panzerplatte 2 (SS15) stage resulted in him dropping back to eighth place. Both Neuville & Ogier classified in the same positions at the end.

Meanwhile, proceedings weren't exactly smooth for leader Tanak. His Yaris WRC developed a brake problem in the penultimate Grafschaft 2 special stage (SS18), due to which the Estonian had to go into defence mode & drive cautiously through the final Dhrontal 2 Power Stage (SS19). Due to his reduced pace, Tanak had to back-off from the fight for bonus points. Subsequently, he could only secure 25 points for his overall first-place finish, while Hyundai's Neuville managed to win the final power stage to grab 5 bonus points. Ogier too managed to salvage a single point from his fifth-place classification in the final power stage. 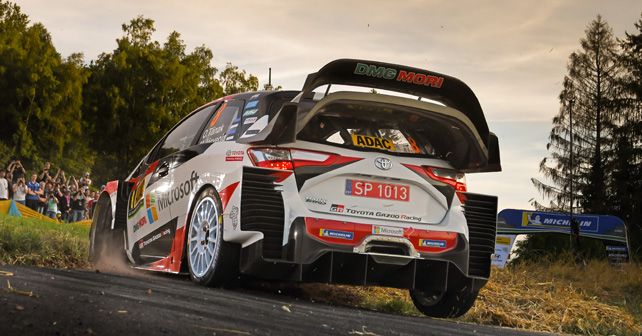 At the end though, both Neuville & Ogier benefitted from their respective team strategies. Hyundai's Dani Sordo, who finished ahead of Neuville in fourth deliberately sacrificed his position to give it to Neuville. Meanwhile, Citroen's Esapekka Lappi had crossed the finish line in sixth but decided to drop back two places to allow Ogier the benefit of a seventh-place finish. Hyundai's Andreas Mikkelsen also benefitted from this move as he moved up from seventh to sixth.

The WRC bandwagon will now head to Turkey for its 11th round.

Clean sweep for Toyota, keep this momentum for Turkey!