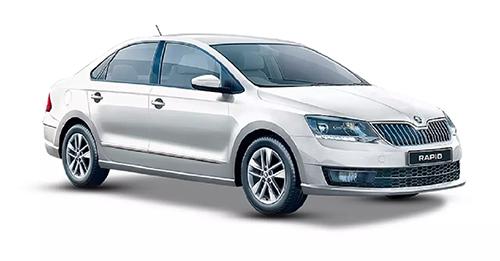 The Skoda Rapid is, as of mid-2020, the entry-level model in Skoda’s India line-up. Therefore, since the Skoda Rapid price is substantially lower than other vehicles in the Czech carmaker’s line-up, it accounts for more than 50% of the total sales from the brand.

The Rapid lies under the C-segment sedan space in the Indian market. For 2020, the shift to the VW’s state-of-the-art 1.0 TSI engine breathes new life into the ageing Rapid. Here’s everything else that’s new with the 2020 Rapid.

While there are some changes to the 2020 Skoda Rapid new model, it looks largely similar to its 2016 iteration. Of all, the most prominent changes with the new Rapid are the addition of a boot lip spoiler and a new design for the alloy wheels.

Rest, however, remains identical to the pre-facelift version. The hallmark quartz cut headlamps with chrome eyelashes, vertical housing for the fog lamps, and the taillamps are simply borrowed from the model it replaces.

The interior of the Rapid, too, remains largely similar to the pre-facelift model. Where the design of the dashboard remains the same, the additional equipment sure makes it look sufficing by modern standards.

The standard variants of the Rapid continue with the traditional black-and-beige interior theme, while the Onyx gets a grey and black theme and leatherette seat covers. The Monte Carlo variant, on the other hand, also gets a few design changes to differentiate it from the lower variants.

Unlike before, the 2020 Rapid is a petrol-only model. It comes powered with the VW Group’s 1.0-litre three-cylinder turbo-petrol engine, which is capable of churning out 109bhp and 175Nm of torque. At the time of launch (as of mid-2020), it only comes mated to a 6-speed manual gearbox. A 6-speed torque converter automatic is on the cards. Moreover, the engine is compliant with BS-VI emission standards. 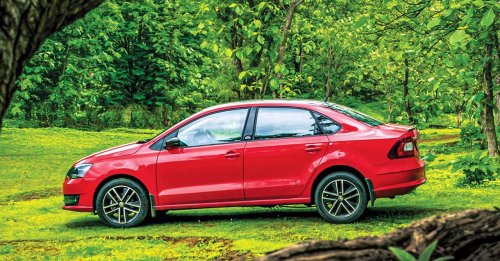 Skoda Auto India has officially started accepting bookings for the Rapid AT against a refundable amount of ₹25,000. Bookings can be made either offline via any authorised Skoda sales outlet or....

What is the current on-road price of Skoda Rapid TSI?

Currently, the Skoda Rapid TSI is priced at Rs. 7.79 Lakh for the base Rider trim.

What is the price of the top variant of Skoda Rapid TSI?

Which year did Skoda introduce the Rapid TSI in India?

The Skoda Rapid TSI, in its current form, was introduced in 2020 .

What are the top competitors of Skoda Rapid TSI?

The Skoda Rapid TSI goes up against the Volkswagen Vento and Toyota Yaris in the Indian market.