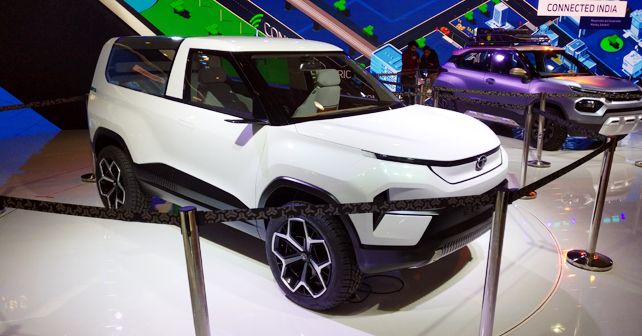 Rumours suggest that Tata Motors is conducting a feasibility study for a production-version of the Sierra EV Concept. Add to the mix the overwhelming response it received at the Auto Expo 2020, and we may just get to see the production car soon.

Of late, Tata Motors, with the invaluable skill of its design chief Pratap Bose, has been on an absolute roll in terms of creating great designs. Its exhibits at the ongoing Auto Expo 2020 are a testimony to this. From the production PV models to CVs and drool-worthy range of Prima trucks, the Tata stall has indeed been one of the biggest crowd-pullers this year.

Speaking of crowd-pullers, how can we not mention the two jaw-dropping concepts? The HBX and the Sierra EV. While we know the HBX Concept was revealed as a near production-ready model, it was the Sierra EV Concept that rekindled the love for the Sierra nameplate. After all, for its time, the original Sierra was indeed a handsome-looking SUV. Moreover, from the media fraternity to devout Tata customers (and even those who aren't), the Sierra EV Concept received high-praise from all alike.

Now, it was earlier assumed that Tata brought the Sierra EV Concept purely as a design study to this year's Auto Expo. However, some reports suggest that Tata is actually considering a production-version of it. Moreover, the ecstatic response the Concept received at the show will surely prompt Tata to speed up the process, if at all such plans are in the pipeline.

If the rumours are true, expect the Sierra to make a comeback as a lifestyle SUV that will sit somewhere between the Harrier and the Gravitas. A closer look at the Sierra EV Concept reveals certain design similarities with the new Land Rover Defender. So, can we expect Tata to make the new Sierra as a purpose-built off-roader? Only time will tell . . .