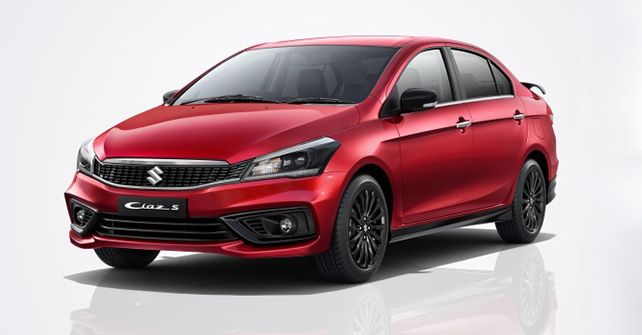 Based on the Alpha variant, the Maruti Suzuki Ciaz S gets sporty cosmetic updates to the exterior including black alloy wheels, a rear spoiler and more. Inside, the Ciaz S gets an all-black treatment

In August last year, Maruti Suzuki commenced sale of their updated BS-VI models. The company commenced the shift with the Baleno hybrid and then gradually introduced the Alto 800, Wagon R, Swift, Ertiga and more. Now, the Manesar-based carmaker has brought in the updated Ciaz – their 11th car to get the BS-VI update. Priced of the Ciaz now start at Rs 8.31 lakh for the base Sigma variant with the manual transmission. The top-spec Alpha trim with the automatic gearbox is priced at Rs 11.09 lakh, which is the same as before. Just like all other Maruti Suzuki models, the Ciaz BS-VI too will only be available with a petrol heart. Maruti Suzuki has still not updated their diesel variants to BS-VI. Prices of all versions (except Alpha MT variant) have increased by roughly Rs 12,000. All prices ex-showroom Delhi.

Mechanically, the Ciaz continues to be powered by a 1.5-litre four-cylinder naturally aspirated engine. Transmission options include a 5-speed manual and a 4-speed torque converter.

Cosmetically, the BS-VI Ciaz will look the same as before. However, Maruti Suzuki has now introduced the Ciaz S. Based on the Alpha variant, the Ciaz S is priced at Rs 10.08 lakh (ex-showroom Delhi), which makes it about Rs 11,000 dearer than the standard model.

The Ciaz S gets dual-tone treatment to the exterior. The fog lamp casings are now black, as are the ORVM casings and alloy wheels. The Ciaz S gets black side skirts, a new rear spoiler and a redesigned rear bumper. Unlike the standard model, the Ciaz S gets all-black finish to the interior and upholstery. To break the monotony though, the interior gets silver accents on the door trim and the instrument panel.