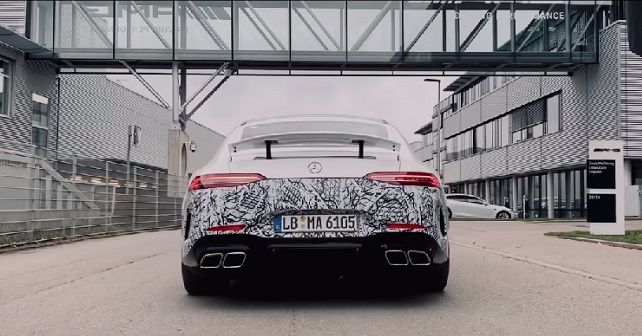 A teaser by Mercedes-AMG suggests that a plug-in hybrid version of the GT 4-door Coupe is in the works.

A couple of days ago, Mercedes-AMG uploaded a video on their social media, which thanked its employees for having another great year (2019). Now, that's not it, Mercedes-AMG also casually included in the video a teaser of what looks like a plug-in hybrid derivative of their GT 4-door Coupe.

You don’t necessarily have to watch the entire thing, though – the video link is right at the bottom of this story, by the way – you can directly skip to the very end of the video, where you’ll find a fully camouflaged GT 4-door Coupe driving away. Nothing unusual, right? Well, not until you turn the volume up to the max. Because that's when you’ll hear nothing – or rather a whirr of an electric motor. Plus, since the video ends reading ‘The Future of Performance’, it’s kind of a giveaway that something electrifying is cooking at AMG.

According to some reports, this new version will be dubbed the AMG GT 73 4-door and will be based on the original GT 4-door concept from 2017. This means that it’ll be powered by the existing car’s 4.0-litre twin-turbo V8 and an electric motor. The presence of four exhaust pipes in the camouflaged version also suggests that there’s internal combustion involved in the future of AMG’s performance. The petrol powertrain will power the rear axle, whereas electricity will propel the front wheels, making it an all-wheel-drive vehicle. Power figure (combined) is expected to be over 800bhp!

At the moment, these are the only details that have surfaced. There’s no news concerning when this plug-in hybrid GT 4-door will be revealed, but it’s expected to debut at the 2020 Geneva Motor Show in March.