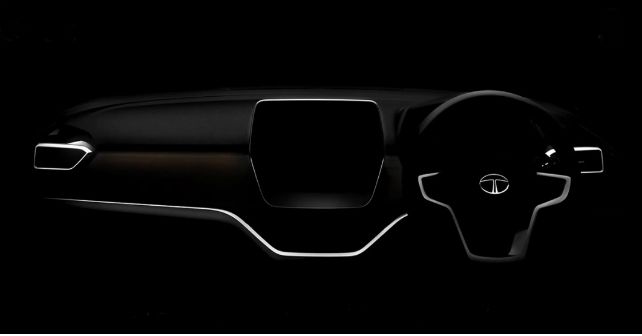 Mahindra did it with the Marazzo, now Tata is doing it with the Harrier. About a month ago, Tata released the official image of the Harrier. Now, the company has released another teaser image – this time of the dashboard. While the image doesn’t reveal much the resemblance with the H5X concept is easily evident. There are a few details that we could decipher though.

A floating infotainment screen takes the centre stage on the dashboard and it is sure to be a touchscreen unit. This infotainment screen will come with Apply CarPlay, Android Auto and a built-in navigation system. If the spy shots leaked so far are anything to go by, the Harrier will sport a dual-tone dashboard in grey and brown. The car is also likely to have brushed aluminium accents in a few places like the steering wheel, as air-con surrounds and more. Other visible details of the car include a leather-wrapped steering wheel, automatic climate control, electrically adjustable ORVMs and more.

The Tata Harrier is based on an all-new platform, the OMEGARC (Optimal Modular Efficient Global Advanced Architecture) which is essentially a derivative of Land Rover D8 platform that also underpins the Discovery Sport. While the engine details haven’t been revealed as yet, it is likely to come with a 2.0-litre turbocharged diesel motor is dubbed as the KRYOTEC. The Harrier is expected to come with two engine options – a 6-speed manual and a 6-speed automatic. Higher variants will also get a Terrain Management system with an all-wheel-drive layout. Just like the rest of the Tata cars on offer today, the Harrier is also expected to come with drive modes.

More details of the new Tata Harrier are likely to be revealed next month and the launch should be scheduled sometime in early 2019. Expect the Tata Harrier to be priced in the Rs 15-20 lakh range.