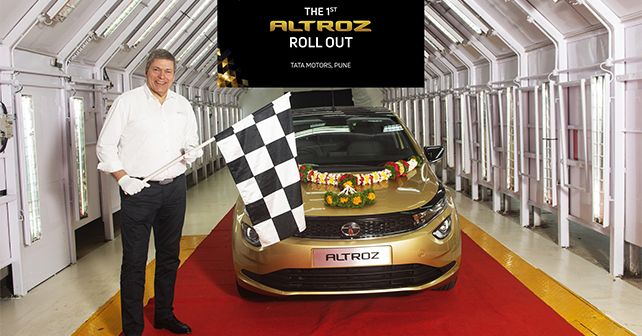 When it gets launched in January 2020, the Altroz will sit in the premium hatchback space alongside the Maruti Suzuki Baleno, Hyundai Elite i20, Volkswagen Polo and the Honda Jazz

It has been almost two years since Tata Motors first took the wraps off a new premium hatchback concept at the Auto Expo 2018 – the 45X. Well, we have known for a while that this concept will see the light of day as the Altroz. With the launch of the new Altroz scheduled in January 2020, Tata Motors today rolled off the first unit from its manufacturing facility in Pune.

Speaking about the same, Mayank Pareek, President, Passenger Vehicle Business Unit (PVBU), Tata Motors said, “The Altroz is our first product that will be launched on the all-new ALFA platform and we believe that it will raise the bar for vehicles across the premium hatchback segment, come 2020. Since the unveiling of the concept in 2018, the anticipation for ALTROZ has always been high. We hope that customers will appreciate the new futuristic design with host of smart features, many of which are one segment above.”

Although we have seen numerous spy shots and endless teaser images, this is the first time the company has released an official image of the car. The image only shows the front-end of the car, and we must say it look identical to the 45X concept. Up front, its wide honeycomb grille and the large bumper give it a wide stance. The grille is underlined by a sleek chrome strip at the bottom and a gloss black strip at the top. Other exterior details we decoded from the teaser and spy shots include large projector headlamps with DRLs, 10-spoke alloy wheels, gloss black roof and ORVM casings. On the inside, it looks like the Altroz will sport all-black upholstery – just like the Nexon.

As of now there is no official confirmation about the engine that the Altroz will come with. , the Altroz is expected to be powered by the 1.2-litre naturally aspirated petrol from the Tiago. It may also be introduced with a 1.2-litre turbo from the Nexon. The diesel Altroz too may be borrowed from the Nexon. Tata is likely to offer the Altroz with a manual as well as an AMT option.

When Tata brings in the Altroz in early 2020, it will compete against the likes of the Maruti Suzuki Baleno, Hyundai Elite i20, Toyota Glanza, Honda Jazz and the likes. Expect Tata to price the Altroz in the Rs 5-10 lakh price range.

Tata Altroz teased ahead of debut