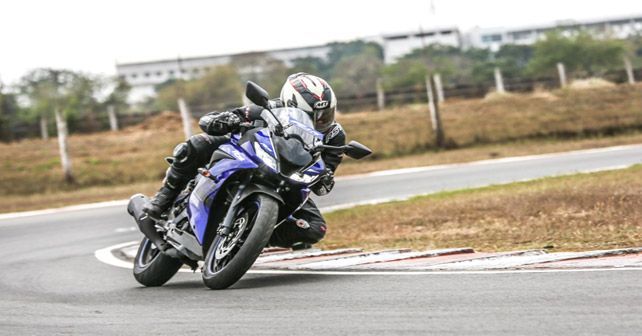 Ten years ago, with the launch of the R15, Yamaha changed the game for the average Joe. And with the R15 V3.0 out now, the firm seems to be treading along the same path. The question is, does the new formula work?

It was the summer of 2008, and I was fresh out of school. My peers were busy trying to figure out their future plans, what college or course would be best for their careers. I, on the other hand, was in a much bigger predicament – to choose amongst the colour options available for the newly launched Yamaha R15. The red-and-black looked tacky to me, and although the all-matte black gave the motorcycle a mean and aggressive demeanour, it also disguised most of its design details. So, after thinking long and hard, I finally zeroed in on Yamaha Racing Blue. Like any 18-year-old, my next step was to take this proposal to my dad and ask for financial approval. But things were not going to be so simple for me. While my dad looked impressed with my upselling skills, he flatly declined my proposal. ‘Forget about it!’ he said. And that was the end of it!

As fate would have it, three of my closest friends bought the R15 in the following months. Although I envied them wholeheartedly, this also meant that I got ample opportunities to hop onto the saddle and ride it to my heart’s content. I’d take it to college regularly and even did a couple of road trips to the hills as well. To date, it remains a very special motorcycle to me. And not just me, but everyone who’s ridden the original R15 will, in all likelihood, have a similar opinion. You see, when it was launched a decade ago, the R15 changed the game for the average Indian motorcyclist – it was the first true mini-sportsbike with top-of-the-shelf cycle parts. I would, in fact, go so far as to say that the original R15 is a future classic in the making.

Now, the reason of this rather long reminiscence of my early adulthood is that I recently had a chance to ride the all-new Yamaha R15 V3.0 – the third-gen model of this revered 150cc sports bike. And it was while riding it around the racetrack that all those memories came flooding back. Does that mean it’s as good as the original? I guess you’ll have to continue reading this piece to find out.

Everyone had an opinion about the original R15. For some, it looked mean, and for others, it was too skinny for a sports-bike. And, to an extent, both were true. Now, although the original R15 looked like a scaled-down R1, it wasn’t completely a looker – especially the rear section with its bland tail and thin rear tyre. This was something that Yamaha addressed in the V2 in 2011 – but they overdid it slightly. The V2 definitely looked more striking, but with the updates, it was the front-end that looked small, while the rear got bulkier. Make no mistake, it was still a very good-looking bike – but something seemed off. 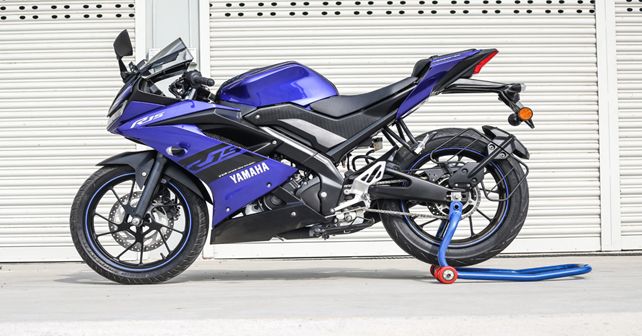 Enter the all-new R15 V3. It sure cuts a familiar shape, but compared to the previous models, the V3 looks remarkably sharp and well proportioned. There’s no odd angle, and every element on its body – from front to rear – is in perfect balance. In addition to that, there are some clever design updates that work in its favour. For instance, the full LED headlamp looks really mean and the R1-inspired LED taillight looks sleek. The tyres are wider, too – 100/80-17 (front) and 140/70-17 (rear). Personally, I’d say there’s absolutely nothing to complain about when it comes to styling. It simply looks spectacular.

Equipment wise, you now get an all-digital instrument cluster that has the usual tell-tale lights. Additionally, there’s a gear position indicator and gear-shift light on top of the instrument cluster. It also has a USB mobile phone connector. The overall quality and fit and finish of materials is good, but there is room for improvement in some places – particularly the plastics around the switchgear and the finish of the paint.

When the R15 was launched back in 2008, it moved the game forward with its technology. But over the past decade, Yamaha didn’t make any real developments – the V2 had the same engine and components as the original R15. With the Version 3, though, things have changed. It gets a new 155cc engine that’s bigger and features a lot of improvements – lighter connecting rods, a 10-hole fuel injector and so on. Power output is up by around 2.5bhp to 19bhp, while torque is more or less unchanged at 15Nm.

The main-highlight, however, is that it comes with variable valve timing – or, in Yamaha-speak, VVA (variable valve actuation). Put simply, the variable valve actuation system has two different cam profiles for the inlet valve – one for low- and mid-range torque another for top-end. The switch between the two cams happens at around 7,400rpm, where a solenoid actuates the high cam profile – thereby, increasing the inlet valve lift. Now, this is something that should be of more relevance in day-to-day riding, so we’ll reserve our judgement on it till we ride the bike on the road. 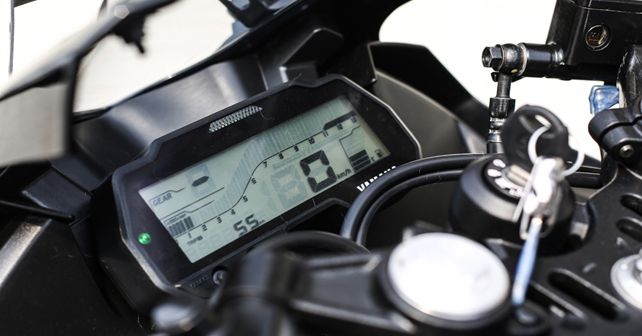 How does it feel on the track? Like, the old R15’s engine, the new motor is tractable and rev-happy – the harder you rev it, the more responsive it seems to become. In fact, the engine produces its peak power at 10,000rpm – 1,500rpm higher than before. Overall, the engine performance is strong, and it picks up speed with alacrity. As for the top-end, I was able to touch speeds above 120km/h without much effort on the MMRT’s back straight. The refinement levels are impressive, too – the motor doesn’t feel strained at any time. My only gripe is the exhaust note that’s a bit subdued. That, however, can be fixed with the optional Daytona exhaust that costs around Rs.16,000. As for the transmission, the six-speeder is smooth and gearshifts are precise. The clutch action is light and the downshifts are smooth, thanks to the assist and slipper clutch.

The R15’s razor-sharp dynamics have always been its strong point. That said, when the V2 was launched in 2011, the magic of the original R15 was somewhat lost. It was still a great handler, but the turn-in was slower, and it never felt as nimble as the original. So, does the V3 bring the charm back?

You see, Yamaha has made a lot of improvements over the V2 here. For instance, the V3’s wheelbase is 20mm shorter and the trail has been reduced by 10mm, meaning it has a steeper rake. Sure, it misses out on the inverted front forks that are offered on the global-spec version, but it does get beefier 41mm front forks (vs 33mm on the V2). The delectable Deltabox frame is still there, meaning the inherent balance and rigidity of the original motorcycle is still intact. You can pound it around corners as fast as your ability lets you and you can even change your line mid-corner – nothing upsets it. All of which means that it’s a motorcycle that’s sweet and forgiving to ride on a racetrack. From what I can tell, it definitely feels sharper than the V2. As good as the original? Not quite as flickable, but more stable and confident, for sure. 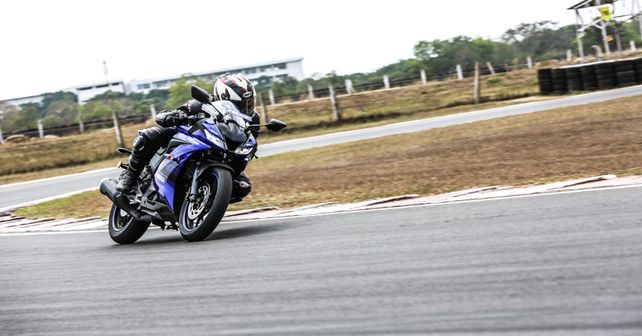 The braking system on the V3 has also been updated, as it features bigger discs now. The brakes are sharp and offer good feedback, but ABS has been given a miss. As for the tyres, Yamaha is offering the V3 with MRF rubber as standard, however, you can fit the V3 with the optional Metzeler rear tyre for about Rs.10,000. In fact, the bike we rode came shod with this tyre. The thing is, while it’ll be a good investment, the front tyre is still an MRF. And that creates some problems when you’re riding hard, especially at the track. Yes, it offers more-than-adequate grip and feedback, but under hard braking, it tends to squirm too much. Plus, the lack of ABS doesn’t help either.

Since I only rode the motorcycle at the racetrack, I’m not willing to jump the gun as yet. Before passing final judgement, I’d like to see how it performs in real-world conditions. That said, the V3 is a clear improvement, and it’s a motorcycle that, I believe, will bring the enthusiasts back to the Yamaha camp. Sure, it does miss out some crucial equipment. For instance, ABS should at least be offered as an option – if not standard. But, on the whole, it’s a rather brilliant package for the price. And I say this because I feel the Yamaha R15 V3.0 is solid proof that you don’t need big horsepower or deep pockets to have fun around a racetrack – or on your favourite twisting mountain roads.

X-Factor: Proof that you don't need big horsepower to have fun. The R15 V3.0 is a magical, yet pocket-friendly, sportsbike. 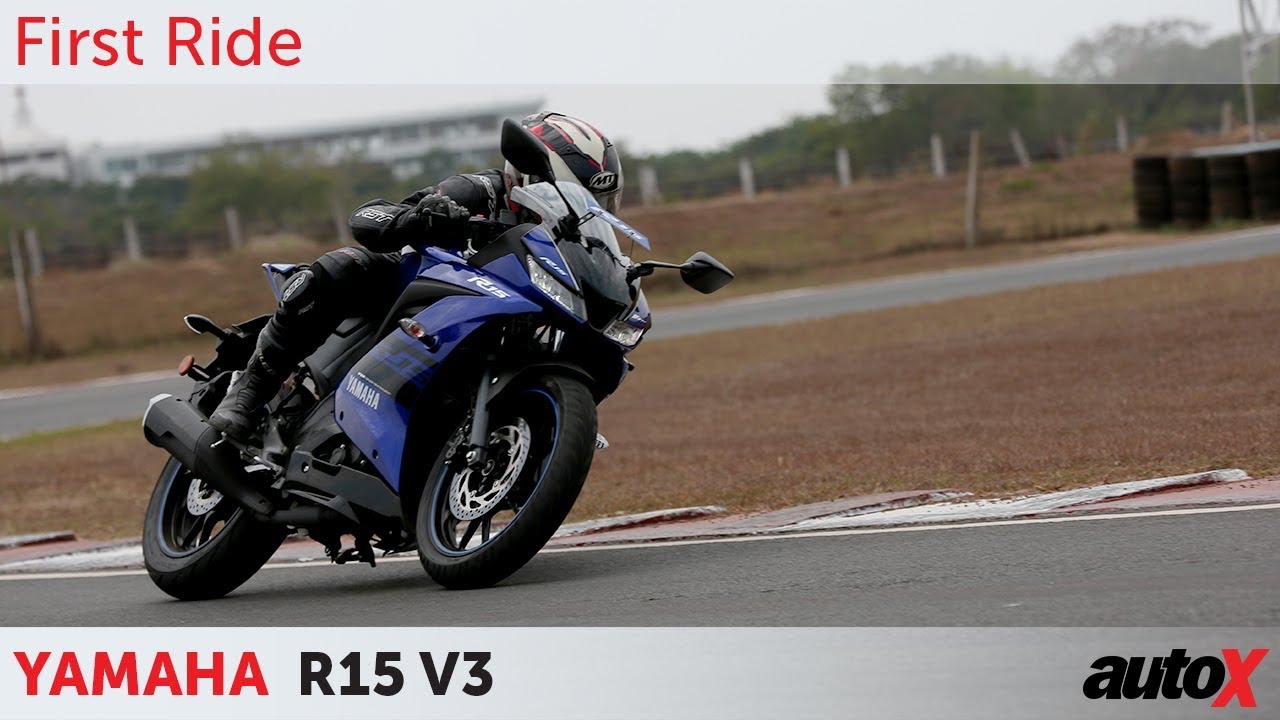