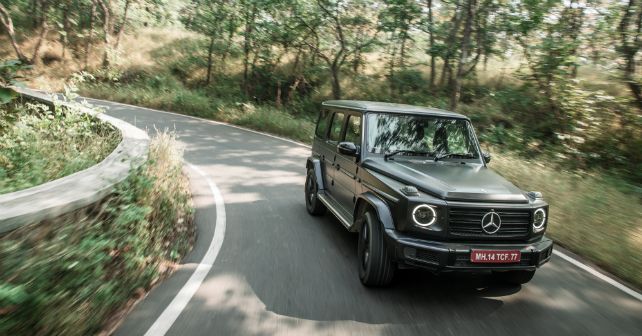 The Mercedes-Benz G350d isn’t the most powerful or elegant car out there, and it still costs an arm and a leg, and then some, but it is greater than the sum of its parts…

Mercedes recently brought in a more affordable variant of the popular G-Class for the first time in India, and it wears a 350d badge. Despite being the base version, it’s priced at an insane ₹1.5 crore. With that kind of money, you could easily get a car that makes twice the power, isn’t designed with a scale, and is a lot easier to manage. Also, the 350d makes half the power and weighs almost as much as its AMG counterpart. So, the important question is this – why should anyone buy one? 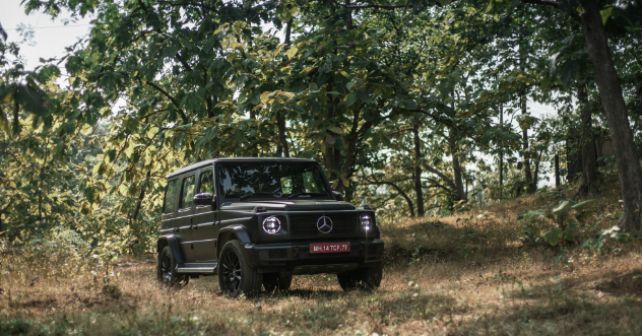 Still not out of the box
It’s true that good design is a matter of personal taste. And, yet, if you have millions across the world drooling over a design, you know it’s right on the money. Although the G-Wagen is quite far from being glamorous or elegant, it is without a doubt brawny. And therein lies its beauty.

It’s in the 2019 iteration that the G-Wagen has received its biggest ever update since its inception nearly four decades ago, and, still, it’s not out of the box – and I mean that quite literally. The G’s boxy cues continue to have that imposing feel, which syncs superbly with its go-anywhere attitude. Even after all the updates it has received over the years, the G gleams with old-world charm. The exposed hinges, turn indicators on the fenders, door handles, tailgate-mounted spare wheel, and rectangular glasshouse are all a nod to the G-Class of yore. 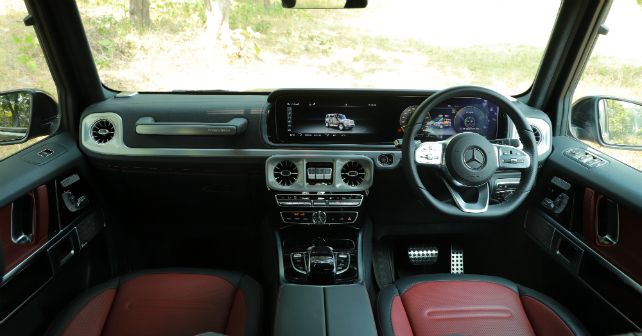 Inner sanctum
Although from the outside, the G350d continues to flaunt the retro design cues of the original G-Wagen, the interior is ultra-modern. Like some of the new-age Mercedes-Benz cars, it also gets two large screens – one for the infotainment and the other for the instrument cluster. That being said, it’s great to see that the German carmaker hasn’t succumbed to the pressure of replacing the aircon controls with a screen too.

The stubby dashboard ensures that the front seats are closer to the windscreen. Thanks to a ground clearance of 241mm, the seating is pretty high off the ground. Sure, it makes ingress and egress a difficult exercise, but, at the same time, it ensures that the driver has a good view from behind the wheel. 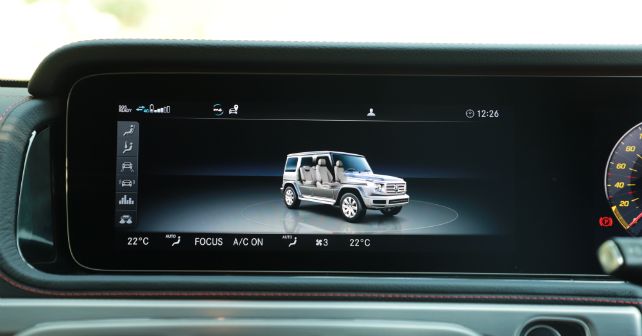 The G350d is 4,606mm in length, excluding the tailgate-mounted spare wheel, which makes it shorter than even the C-Class – even though it may not give you that impression. In fact, the 2,890mm wheelbase of the G is just 50mm more than that of the C. With that in mind, space in the rear seat is plenty. It may not be as spacious as Buckingham Palace, but it’s certainly not as cramped as a Mumbai apartment.

Box Trot
Providing firepower to the G350d is a 3.0-litre in-line six-cylinder diesel motor – the same that does duty in the S-Class. For a car that weighs close to 2.5 tonnes, the G only makes a little more than 280 horses. Now, that doesn’t quite seem a lot, especially given the fact that its AMG counterpart produces twice as much. But, after driving it for a couple of days, we’re happy to report that the power is sufficient – if not abundant. 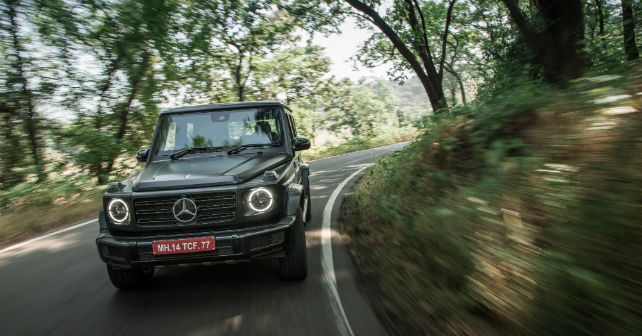 The G350d doesn’t have the best power-to-weight ratio, but its 600Nm of torque ensures that it doesn’t feel sluggish. In fact, it’s quite the opposite. You won’t find yourself pushed back into the seat under hard acceleration, but you will definitely be surprised by the eagerness with which this 2.5-tonne car surges ahead.

Mercedes claims that the G350d can do the 0 to 100km/h dash in just 7.4 seconds, and that’s quite impressive for a car of its size. What many may not find impressive is its top speed of 199km/h. That being said, we found cruising on the highway a lot more enjoyable than pushing it to its top speed. Of course, this has more to do with the high centre of gravity, but more on that later.

Coming back to the highway manners, the G350d feels supremely smooth. Considering its upright design, we were expecting some amount of wind noise, but the silence inside the cabin, even at high speeds, was indeed a pleasant surprise. 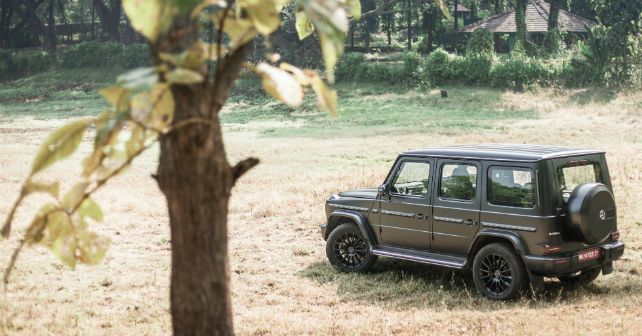 Gobsmacking driveability
When I first drove the new G63 AMG, I was somewhat displeased. Given its performance aspirations, it was insanely stiff for public roads – not something that gels with an SUV with go-anywhere capabilities. The G350d, however, is quite the antithesis of that – and I just love it.

The ride quality is simply remarkable. Cracks, undulations, and potholes of all sizes are tackled with incredible poise. It can make the worst roads feel (almost) like a German autobahn – it’s that impressive.

In terms of handling too, the G350d fares quite well – especially given its high centre of gravity and its ladder frame underpinnings. Of course, it isn’t as flat as some of the performance sedans you can get for the same price, but it isn’t fair to expect that kind of handling either.

The G-Wagen does, however, feel planted at high speeds. The quick and precise steering further aids it in carving a clean line in and out of a corner. However, feedback could have been a bit better. The G that we got our hands on was fitted with optional 20-inch wheels, with 275/50 section rubber. The Pirelli Scorpion Zero tyres performed well on the road, but being tarmac-focused, they may not be the best bet for off-road duties. 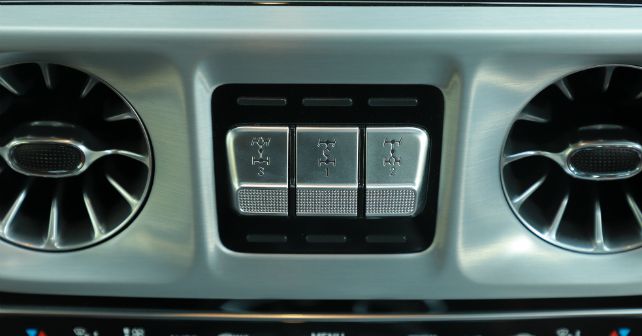 The adventure is out there
The G-Class has been designed to be driven on surfaces that you’d never think that a car can conquer. And it has the credentials to do it all. Aside from the 214mm of ground clearance, it has a 30.9-degree approach angle, a 29.9-degree departure angle, and a 23.5-degree breakover angle.

Its fantastic 700mm of wading depth is just what you need to tackle Mumbai in the monsoon. The icing on the cake, however, is the low-ratio gearbox and the three diff locks – front, rear, and centre.

Although we didn’t get a chance to thoroughly test the off-road prowess of the G-Wagen, we did attempt to climb a hill at a shoot location, and, believe me, it was an absolute walk in the park. In fact, it’s one of the few luxury cars that I wouldn’t think twice about taking off-road. 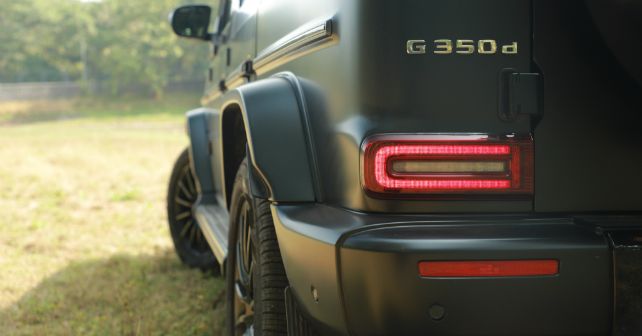 It’s all about choices
Although the G350d has everything that you’d want from a car that bears a ₹1.5 crore price tag, it isn’t a car that will appeal to everyone. It has a refined motor, comes packed with a wagon load of features, and is extremely practical too. Above all, it’s a car that’s capable of forging its own path from where the tarmac ends.

True, it isn’t as fast as some of the other cars that you can get your hands on with that kind of money, but you don’t enter a Mercedes showroom to look at a G-Wagen when performance is at the top of your priority list. Also true that it has the charm to sweep you off your feet and leave you spellbound, and it’ll do anything you ask from it.

X-factor: The only car that you could most likely drive through (and post) an apocalypse.