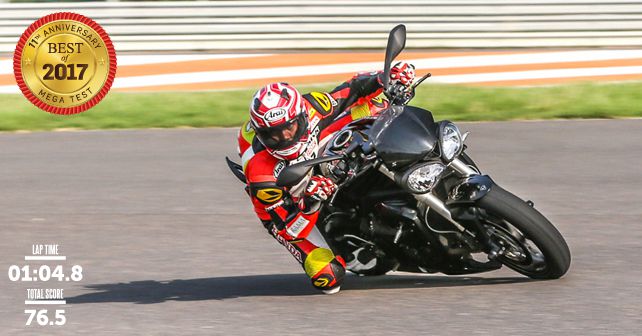 Since the introduction of the Triumph Street Triple in 2007, it’s been hailed for its usability and versatility. So, when Triumph unveiled the new-generation model in the UK earlier this year, it had a lot to live up to. And this 2017 iteration delivers on every front, and then some.

But one aspect that makes it extra special is the Daytona-derived 765cc three-pot motor. It churns out 111bhp, all of which is put down in such a civilised manner that it makes the Street Triple possibly the easiest big bike to ride. Now, these are characteristics that even the previous generation flaunted, but this new version gets even better at the game despite an increase in power of as much as 40%. 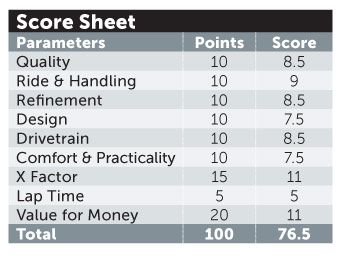 Overall refinement has improved remarkably too. While the engine is well mannered, it’s by no means slow. In fact, the new Street Triple S was the second fastest motorcycle in this test – losing the top spot by just a tenth of a second to the Ducati Supersport. Apart from the firepower, it’s the combination of its sophisticated suspension, reworked chassis and the super gluey Pirelli Diablo Rosso Corsa tyres that really endows it with superb handling dynamics. Of course, due credit must also be given to its 166kg kerb weight too. In fact, the Street Triple made the track experience so simple and enjoyable that, in the three days at the BIC, it was hardly ever seen in the pit-lane – well, till such time that its 17.4-litre fuel tank didn’t hit reserve that is. Sarath too was mighty pleased with the balance and handling of the Street Triple, and found the front-end to be very stable at the track.

As far as riding in the city is concerned, the short gearing helps it roll through traffic even in the higher cogs without any sort of knocking from the engine. And that’s a saving grace, since it’s clutch tends to feel a little heavy in stop-and-go traffic.

While the previous-gen Street Triple had a lot of things going for it, design wasn’t one of them. Triumph has done well to retain its signature bug-eyed headlamp, but at the same time make the bike look a lot cleaner and better proportioned. There are no loose wires hanging about, and the overall build quality is excellent.

At Rs. 8.6 lakh (ex-showroom), the new Street Triple is a little more than Rs.50,000 dearer than its predecessor – but for the additional money, you get improved performance, better electronics and a more balanced chassis while retaining its ‘Street Triple-ness.’ A quick look at the final score sheet demonstrates that the Street Triple performs all its functions with such great efficiency that it’s hard not to fall in love with it. We developed such an attachment, in fact, that it was very difficult to let go of the keys after our three-day stint.