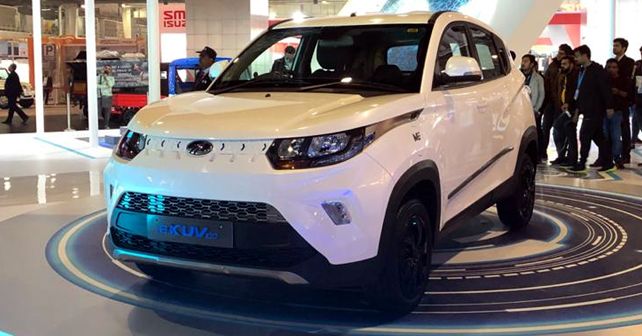 At ₹8.25 lakh, the Mahindra eKUV100, without doubt, has become the most affordable EV in the country. The Mahindra eXUV300, meanwhile, will be launched in the second half of next year.

Last month, we were among the first ones to report that Mahindra will launch an electric version of the KUV100 in the first half of 2020. And now, on the inaugural day of the 2020 Auto Expo, the homegrown carmaker has launched the eKUV100, priced at ₹8.25 lakh ( ex-showroom, Delhi, inclusive of FAME-II subsidies). Mahindra has also revealed the eXUV300 today (which was also reported by us), but it's not coming our way until the second half of 2021.

The eKUV100 is largely based on the KUV100 NXT, barring the few EV-specific changes (a charging port flap at the front & '+ME' badging on the fenders). Visually, the eKUV100 is immediately recognisable, courtesy of a new front bumper and body-coloured grille.

Replacing the KUV100 NXT's 1.2-litre power units on the eKUV100 is an all-new 40kW (53.6bhp) electric motor that sends out 120Nm of torque to the front wheels. The motor in-turn is powered by a 15.9kWh liquid-cooled battery pack, which can be fast-charged from 0 to 80 per cent in just 55 minutes. A regular charger, meanwhile, takes a good 5hr 45min. The maximum driving range, as per Mahindra, is 150kms on a single charge. 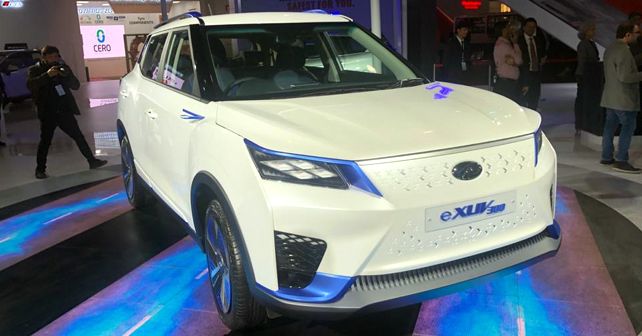 The eXUV300 is also based on its ICE-powered counterpart. However, it features more visual changes than the eKUV100. The eXUV300 gets a fully-revamped front profile, courtesy of a new bumper, a new grille, and new LED headlamps. Even the fog lamp housing is new, with the signature L-shaped DRLs omitted this time.

While powertrain details for the eXUV300 remain scarce at the moment, it is believed that Mahindra will bring in two battery pack options for the eXUV300, each with different capacities. This will allow Mahindra to price the lower-capacity powertrain in competition with the Nexon EV and the higher-spec version with the MG ZS EV. All this will be confirmed closer to the car's launch in the second half of 2021.

Mahindra also took the opportunity to reveal an all-new range of its turbo-gasoline-direct-injection (TGDI) petrol engines, called the mStallion range. This range will power Mahindra's future vehicles and some Ford vehicles as well (click here to know why). The mStallion range consists of three engines – a 1.2-litre unit (128bhp & 230Nm), a 1.5-litre unit (161bhp & 280Nm) and a 2.0-litre unit (187bhp & 380Nm). The 1,997cc unit also happens to be the most powerful Mahindra engine to date (for passenger vehicles) and is naturally suited for the brand's future SUVs like the updated models of the Thar, XUV500 and Scorpio. Expect the mStallion range to debut in 2021 on the new Thar.