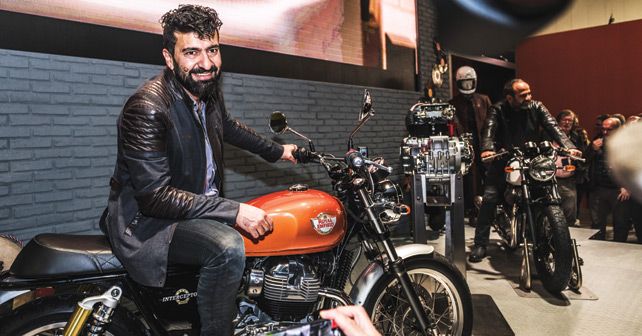 Royal Enfield CEO Siddhartha Lal talks to Arup Das about his two new motorcycles – the Interceptor and Continental GT – and why they opted for a 650cc twin engine.

Royal Enfield signed off on their annual three-day event, Rider Mania in Goa, in style by unveiling the all-new Interceptor INT 650 and Continental GT 650, which they showcased for the first time at the 2017 EICMA motorcycle event at Milan.

Powered by an all-new 650cc parallel twin motor, Royal Enfield plans to first launch the roadster and café racer in the European market by April next year, and thereafter in India. Here’s a quick chat with the man responsible for bringing the iconic motorcycle manufacturer into a new era, Siddhartha Lal, CEO of Royal Enfield.

Congratulations on the new 650cc twin engine, and on these two new models. What made you zero in on this capacity, and why did you opt for a retro roadster and a café racer – especially since the latter is such a niche bike?

As we’ve been doing a lot of single cylinder engines, like the 350cc, 500cc, 535cc and the new 410cc, we had to decide where we want to go as a company, and as a brand. We could have gone a notch down, as we have a good distribution and brand – which, in turn, would help us bring in more riders from the 100-150cc class. But we opted for the more difficult challenge, because we wanted to enter and create this new segment – that’s what Royal Enfield is all about. We were selling, and working with, 350cc engines when the market wasn’t there. Since we have 2.5 million Royal Enfield bikes out there, many riders want to upgrade their motorcycles – therefore, this 650cc is for our community rather than us trying to capture a newer audience. Of course, there will be new Royal Enfield owners, but we feel the majority will be from our current community.

In international markets, where we don’t have many customers, this is the motorcycle that we hope will hit a sweet spot – since we’ve seen a trend where extreme tastes in bikes have started to come down. The thought is now changing for many riders, and they’re asking themselves ‘do I really need a 200bhp sports motorcycle?’ Someone who has had it all is now looking for something simple, old school, great fun and accessible. It’s more about enjoying the availability of torque, rather than just breakneck speed.

So, 650cc because we wanted to make it accessible – that doesn’t mean only in terms of price, which is important of course, but also in terms of power. Especially in India, a customer might like a certain motorcycle, but it might be difficult to ride as it may be too much of an upgrade. So, accessible for us includes price, performance and maintenance costs – yet it must do a ton. In Britain, the idea of a café racer is that it should be able to do 100mph – i.e.160km/h. So, initially, when we were working on a 600cc engine, it wasn’t just about reaching a ton – we wanted to cross it. That’s why we opted for a 650cc. I’ve actually done 170km/h with these bikes, so it can certainly reach the high speeds that we want – but it’s the mid-range, 60-120km/h, where the torque availability is 100%.

As these bikes are built from the ground up, have you managed to iron out engine vibration issue, which most Indian motorcycles suffer from?

We like good vibes, but not too many vibes – certainly not for long distance riding. As the new engine is a twin, therefore, it produces fewer vibrations compared to the single. It has a counterbalancer, which basically means all the primary vibrations are eliminated. Secondly, we’ve kept a 270-degree crank, which we believe gives a lot more character to the motorcycle as it’s not symmetrical. This gives it a bit of a rumble, rather than a mechanical sound. We’ve done a lot of work on the twin cradle chassis, on the suspension, and the headstock angles. Basically, there are 30 really important different geometrical parameters on a rolling chassis that define the ride, handling and suspension at different riding conditions and at different speeds. We’ve taken 12-18 months in just refining it with the help of the best riders in the world, including a former British Superbike Series rider and also from an expert who took part in the Dakar Rally. We’ve made sure this bike has character, yet is comfortable for long rides. 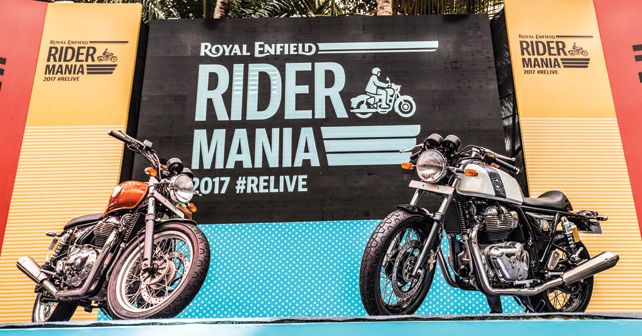 How would you compare the new bikes with your current lot?

It’s a completely different feel, but equally compelling. What stands out is that it gives you the manoeuvrability, accessibility and approachability of a small motorcycle. It’s made in such a way that you can go around city traffic without any problem. It also holds its own on the highway as well. It’s stable at high speeds, especially when you face a wind blast from a passing vehicle. Due to the ride, handling and the torque availability, you get instant access to the motorcycle. You feel connected to it, and it’s really fun to ride it.

How similar is the new Royal Enfield Continental GT when compared to the 535cc café racer, in terms of riding position and handling?

So, when you’re working on a new motorcycle, you look at the old one and see how you can improve it. One thing we’ve done is taken the ergonomics to the next level. The current Continental GT’s riding stance can be very aggressive – forcing the rider to crouch down. So we made the ergonomics slightly more comfortable and easier. It’s not extremely committed, though the chassis concept is the same. We’ve refined it a lot more. Everything, according to us, is one level up.

When can we expect these motorcycles to hit Indian roads?

We plan to ramp up our production slowly and steadily in India. The first few batches in the summer of 2018 will be sold in Britain and Europe. Initially, we won’t have the numbers to service the Indian market, and second the buying season in Europe is the summer season, from April to June. After that, no one buys motorcycles. So, we don’t want to miss the motorcycle season there – otherwise, we’ll only be present in Europe in 2019.