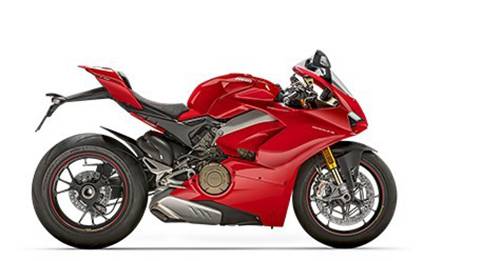 Change Bike
Be the first to rate this bike
Variant:
City: New Delhi
₹ 25.34 Lakh
Check On Road Price Last Recorded Ex-showroom Price Ducati has discontinued the Panigale V4 S and, therefore, it is out of production.

The Ducati Panigale V4 S Mileage is 14 kilometers per litre.

In a nutshell, the Panigale V4 S is a more powerful version of the Panigale V4. The V4 S shares its design with the V4, the design is muscular, elegant and simply stunning. The LED DRLs sit on top of the LED headlamps at the front, the design is further enhanced by a double layer fairing, diamond tank, a translucent front frame, and sleek tail guard.

The Panigale V4 S is an absolute head-turning motorcycle, which shares its design cues with the standard V4 Panigale. The bike has a hefty kerb weight of 195kg with a wheelbase of about 1,464mm, and a fuel tank with a filling capacity of 16-litres.

The Ducati Panigale V4 S new model comes loaded with tech, including riding modes, power modes, Ducati quick shift system, Sachs steering damper, quick control selection, and automatic switch-off for turn indicators. Onto the safety department, the V4 S is equipped with Cornering ABS, traction control, slide control, and a quick shift up/down system. The headlamp is a full LED unit with LED DRLs and the taillamp is also an LED unit. The instrument cluster is a 5-inch coloured screen, which hosts all the information like a speedometer, tachometer, lap timers, fuel levels, riding range to name a few.

Below are the Pros & Cons of the Ducati Panigale V4 S:

Ducati Panigale V4 S Price in Near By Cities