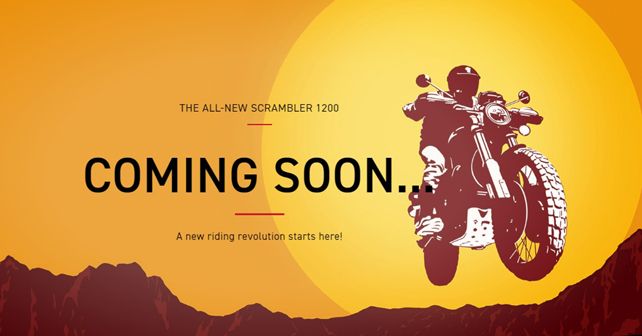 Triumph's latest offering will soon make its debut ahead of the 2018 EICMA in Milan.

Speculations about Triumph developing a new scrambler motorcycle have been fairly popular in the industry despite the brand's best efforts to keep the new project under wraps. Now, however, the British brand has teased its latest creation on its social media channel and its official website with clear indications that the new Scrambler 1200's global unveiling is slated for October 2018. The new motorcycle belongs to Triumph's ‘Modern Classics’ portfolio like its predecessor, the Street Scrambler.

Based on conjecture, the new Scrambler 1200 could be offered in two variants, a base model, and a higher, performance-spec version. Judging by the teaser, the production bike is likely to have minimalistic styling as seen on the test mule. For better off-road dynamics, the Scrambler 1200 will come fitted with spoked wheels, a larger 21-inch front wheel (the smaller Street Scrambler runs a 19-inch front). Some of the features on the Triumph Scrambler 1200 include an LED headlamp, engine and hand guards. The engine on the new Scrambler 1200 could potentially be a Bonneville Bobber-sourced 1,200cc parallel-twin motor with some tuning tweaks which would differentiate the motor's specs from the Bonneville family. For electronics, the Scrambler 1200 could get a ride-by-wire throttle, traction control and ride modes, which may include an off-road mode as featured on Triumph's Tiger range of motorcycles.

What will surely prove to be an intense battle is the fact that Ducati is also on the verge of launching its Scrambler 1100 soon which will be a direct competitor to the Triumph Scrambler 1200. Based on Triumph’s current strategic manoeuvring, the new Scrambler 1200 could reach the Indian shores by the first-half of 2019.