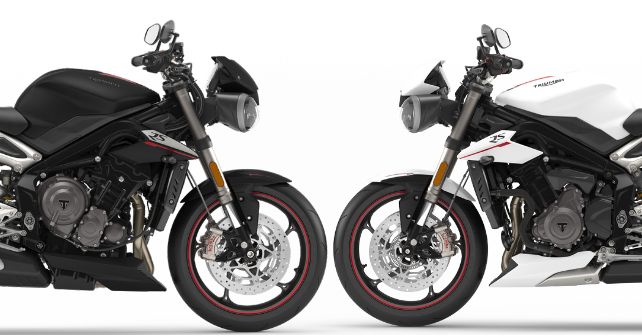 Triumph is on a roll. Subsequent to the launch of the Speedmaster, Tiger 800 and more recently the Tiger 1200, Triumph has now added two new colour schemes to the Street Triple RS. When the British marquee brought in the street naked last year, it was launched just in the Matt Silver Ice shade. The company has now added Matt Jet Black and Crystal White to the colour palette. Triumph introduced the new Street Triple in India in June last year, but only brought in the S variant during the time. They added the RS variant to their product portfolio later in October 2017.

Apart from the additional of these new colours, there are no changes to the motorcycle. It continues to be plonked with a 765cc three-cylinder motor that pumps out 121bhp and 77Nm. This engine comes paired with a 6-speed motor. Triumph has loaded the Street Triple RS with a lot of tech including an adjustable 5-inch TFT screen, five riding modes, adjustable front forks from Showa, and a fully adjustable Ohlins rear monoshock.

The Triumph Street Triple RS is currently priced at Rs 11.13 lakh (ex-showroom). At the time of the launch, the motorcycle carried a price tag of Rs 10.55 lakh. While Triumph has brought in all their globally updated models to India in less than a year, all focus is now on the new Speed Triple that was unveiled in February earlier this year.