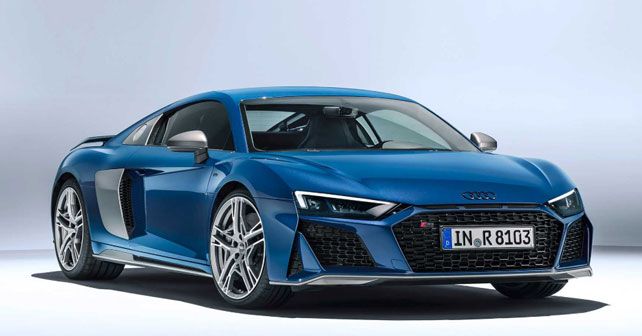 Audi has officially released pictures of its facelifted R8 that gets some pretty edgy styling all around. For starters, the front end of the car has been completely redesigned with the new car sporting the most discreet three slat front grille while the central air dam on the front bumper gets far more angular edges that make the air dams below the head lamps look more edge as well. The head lamps themselves look identical to those of the pre-facelift model. Rounding up the updates on the front is the new front splitter that sits pretty and low on the bumper lip.

Since this is a facelift, the basic silhouette of the car remains the same as earlier and the side profile of the car remains much the same as earlier apart from a subtle side skirt that matches the front splitter. And then there is the matter of those new rims. The standard model gets new 17-inch rims while there are lightweight 20-inch five-V design optional rims also on offer. Going around the back reveals a completely new back end with a slick new rear spoiler, sleek tail lamps, the rear grille extends the complete width of the car now while at the bottom the centrally mounted air diffuser continues to exist but with massive housings for the tail pipes on either side. 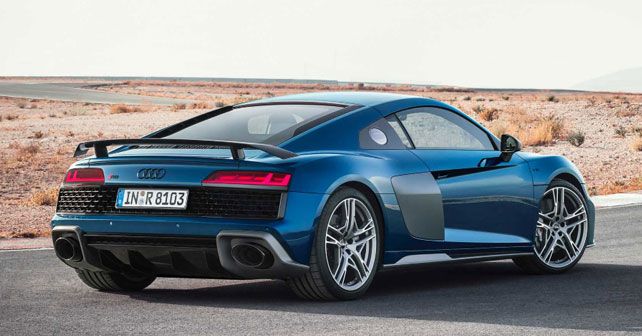 The facelift for the R8 isn’t just limited to glitz and glam though. For this is a supercar after all, so Audi has given it more poke to justify its new looks. The car continues to be powered by the Lamborghini sourced 5.2 litre, naturally aspirated, V10 engine but the power ratings for the car standard model have gone up from 533bhp to 562bhp and peak torque has also gone up by 10Nm to 550Nm. This allows the new R8 Coupe to go from 0 – 100 km/h in 3.4 seconds and onwards to a top speed of 324km/h. The convertible model meanwhile can achieve the same in 3.5 seconds and hit a top speed of 322km/h.

As for the new flagship model, the R8 V10 performance quattro variant, the max power and torque figures are rated at 611bhp and 580Nm respectively, a rise of 10hp and 20Nm. The new Audi R8 V10 performance quattro has a top speed of 331 km/h and a 0 – 100 km/h time of 3.1 seconds. Power continues to be channelled to all four wheels via a seven-speed double clutch automatic transmission.

With the latest updates, Audi’s mid-engined supercar steps up its game on the styling department to stay relevant in times of ever-changing competition. And the added firepower will definitely keep it relevant in the performance trump card pack.