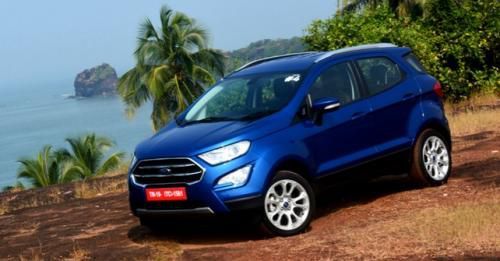 The Ford EcoSport gets rejuvenated with a host of updates to better take on the Tata Nexon and Maruti Vitara Brezza.

Ford has launched the updated EcoSport in compact SUV in India, at a starting price of Rs. 7.31 lakh, which is exactly the same as the outgoing model.

This serves as the first major facelift of the EcoSport in four years since it was first introduced in India. However, this isn’t just a minor nip and tuck job like most facelifts. Alongside a new face, the Ford EcoSport now gets updated interiors, more equipment, and most importantly - a brand new petrol engine & automatic transmission.

The big, Endeavour inspired hexagonal grille flanked by large fog lamps have granted the facelifted EcoSport a lot of character. The interiors, just like the front end, have been substantially updated. There is a refreshed dashboard with an all new centre console, which looks much cleaner compared to the cluttered one on the old model. Trend trim and upwards now feature a floating tablet-style infotainment system with Android Auto and Apple CarPlay. Furthermore, the instrument cluster and the steering wheel are all-new as well.

Under the hood of the new EcoSport is a new 1.5-litre, 3-cylinder, naturally aspirated petrol engine capable of producing 121bhp of power and 150 Nm of peak torque - which are 10 per cent and 7 per cent better than the outgoing 1.5 petrol engine. The 6-speed DCT automatic gearbox has now made way for a new 6-speed torque converter. With the facelift, the 1.0-litre EcoBoost turbo-petrol engine has been axed from EcoSport’s lineup. The 1.5-litre diesel engine, however, is carried forward unchanged from the pre-facelift version.

The new EcoSport is available in 5 trim levels - Ambiente, Trend, Trend+, Titanium and Titanium+. Safety features like ABS with EBD and dual front airbags are standard on all models, while the top-end Titanium+ also adds side and curtain airbags alongside ISOFIX child seat mounts.

Read our review of the facelifted Ford EcoSport here. Also, click here to know about the variant-wise feature breakup of this updated compact SUV.