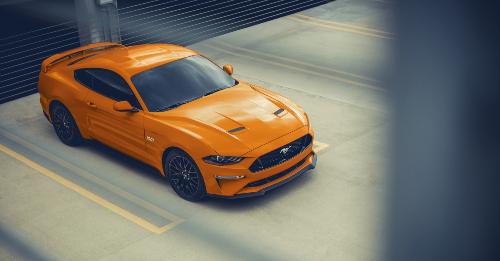 Discontinued in 2020, the Ford Mustang is expected to make a comeback in the Indian market very soon. For those of you who may not be aware, the Ford Mustang is one of the few American muscle cars to go on sale in India, which is why it has a huge fan following amongst die-hard enthusiasts.

The car you see above is the facelifted version of the Mustang that made its debut in the Indian market in 2016. Therefore, it gets a slew of updates including a revised front bumper with a new chin, a heavily sculpted bonnet, revised LED headlamps, new LED taillamps, and a more prominent kick-up for the spoiler at the rear.

Inside, the changes are even more subtle. What you do get is a new fully-digital instrument cluster, along with an updated touchscreen unit with updated interface and support for Android Auto and Apple CarPlay.

The Indian-spec Mustang will still be powered by a 5.0-litre V8 gasoline unit – same as its predecessor – which will now churn out 443.8bhp against the 395bhp of the older model. Moreover, it will now be mated to a new 10-speed automatic gearbox. It will, of course, comply with the stringent BS-VI emission standards.

Ford is gearing up to introduce the updated Mustang in the Indian market in the coming months. Expect it to be priced around the Rs. 75 lakh mark (ex-showroom, Delhi).