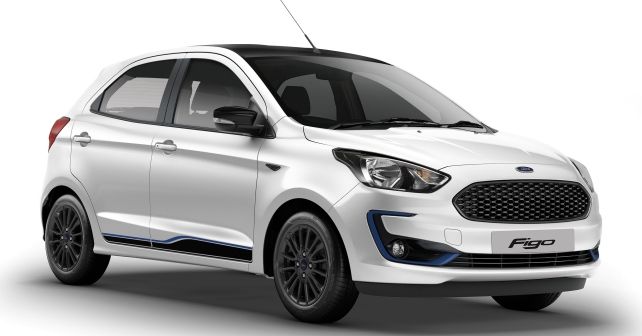 After launching the updated version of its Aspire compact sedan in October 2018, Ford has finally brought in the updated version of the Figo with more features. However, unlike the Aspire that now has Ford’s SYNC 3 infotainment system, the Figo makes do with a developed in India system. Now that may be viewed as a factor designed to keep costs in check considering that the new car has picked up a host of new features including automatic headlamps, automatic wipers, an electrochromic interior rear view mirror, climate control, reverse parking sensors and a camera too.

And on the face of it, this appears to be logical considering that the Figo facelift is very well priced with retail prices ranging between Rs. 5.15 lakh to Rs. 8.09 lakh (ex-showroom India). But what you have to also remember is that this is the safest car in its segment with a stable structure and six airbags. It’s when you factor this aspect in that you begin to understand just how incredibly well the new Figo is priced. The Figo of course gets ABS with EBD while the automatic model gets traction control too.

Other new aspects about the updated Figo are the new set of three cylinder 1.2 litre and 1.5 litre petrol engine options. The 1.2 litre unit is available with a new five-speed manual gearbox that is said to be 15 per cent lighter than earlier, has lower NVH and aids in achieving bettering fuel efficiency. The 1.5 model meanwhile is offered in the automatic transmission equipped model.

The 1.2 litre unit is good for 94bhp and 120Nm, which makes it the most powerful on paper in its segment. But you have to remember that Suzuki’s lesser powerful 1.2 litre unit is very punchy and offers great real-world driveability and performance. Coming back to the new Figo, the 1.5 litre engine generates 120bhp. As for the diesel model, that one continues to be powered by the most powerful engine in its class, the 1.5 litre, four cylinder TDCI unit which is good for 99bhp and 215Nm. This engine too benefits from the new five-speed manual gearbox. As per ARAI ratings, the 1.2 Figo returns 20.4 km/l, while the 1.5 AT is rated at 16.3 km/l and the diesel model sports an efficiency figure of 25.5 km/l.

Styling enhancements for the Figo facelift include new front and rear bumpers. The revised front end though sees a little too much chrome around the fog lamp housings and on the grille. So if subtle is your style then the top-end Blu variants will work better for you with a black grille, fog lamps surrounds, larger 15 inch rims and some subtle stickers on the doors. Inside the blue variants get blue trim inserts on the door pads.

“As a brand, Figo has been a preferred choice of first-time car buyer thanks to the practicality and value on offer,” said Anurag Mehrotra, president and Managing Director, Ford India. “Suited for the fast-paced lifestyle of today’s customers, the 2019 Ford Figo continues to surprise on every count - be it looks, the fun of driving attributes, safety and not to miss, the most-affordable ownership experience.”