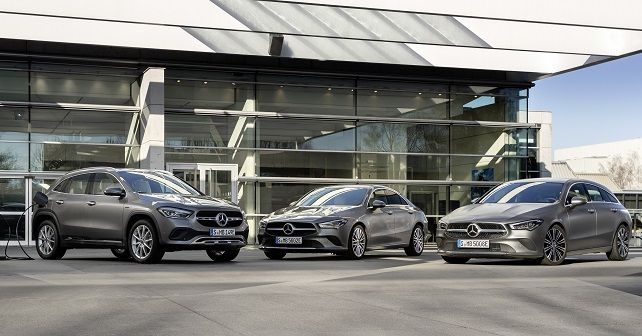 Yesterday, we brought you the news of Mercedes-Benz’s plan of launching three new plug-in hybrid models. Now, without any delay, Mercedes has revealed the said vehicles. The new range of electrified cars includes plug-in hybrid derivatives of the CLA Coupe, CLA Shooting Brake, and GLA crossover. All three will go on sale in European markets soon.

As reported earlier, the new trio of plug-in hybrids will feature the same powertrain as the A-Class A250e, which has been on sale in global markets for a while. Billed as the CLA 250e, CLA 250e Shooting Brake, and GLA 250e, all three come with the same hybrid powertrain that features a 15.6 kWh battery pack, which powers a 75kW electric motor, and a 1.3-litre four-cylinder petrol engine. The total system output stands at 215bhp and 450Nm of torque. The powertrain comes mated to an eight-speed dual-clutch automatic that has been modified for the hybrid system.

The vehicles have a claimed electric-only range of 71 – 79kms on a single charge. According to Mercedes, the battery pack can be charged using both AC or DC charging. To charge the battery pack from 10 to 80 per cent, it will only take around 25 minutes using a 24kW fast charger, claims Mercedes.