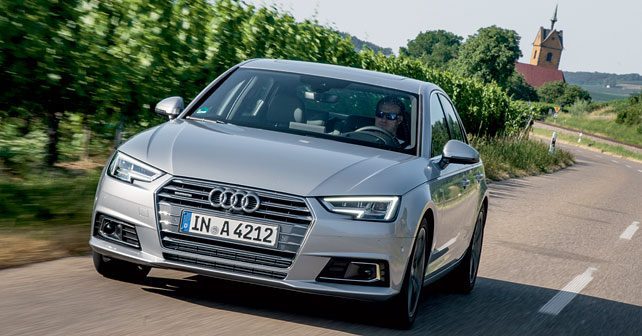 Fifth-gen Audi A4 launching in August-September, 2016. The bonkers SQ7 expected to go on sale around the festive season.

Apart from the launch of the new R8 at the Auto Expo, Audi has had a dry spell in the Indian market thus far in 2016. Now if some reports are to be believed, Audi’s saving its firecrackers for the next half of the year. The Ingolstadt based luxury car maker is planning to launch the new A4 sedan around August-September. Following that, the manufacturer is expected to launch the SQ7 – the performance-oriented version of the Q7 – in the country around the festive season.

The launch of the new Audi A4 is crucial for the manufacturer since over the years it’s become one of Audi’s bread and butter models in the country. Although the 2016 A4 looks remarkably similar to the current model, it is actually an all-new model, meaning it’s the fifth-gen model of the sedan. Based on VW’s MLB Evo platform, the new A4 is around 120 kilograms lighter than the outgoing model. It’s also grown longer and wider than the current car. While there are seven new engines on offer globally, India is likely to get the 2.0-litre TDI diesel and 2.0 TFSI petrol motors in FWD layout, initially. The new A4 also gets S-Tronic dual-clutch transmission in front-wheel drive layout for the first time.

Now coming to the Audi SQ7. The high-performance iteration of the Q7 is the first road-going vehicle to feature an electric compressor (turbo). The luxo-barge is powered by a 4.0-litre V8 twin-turbo diesel engine that develops 429bhp and 900Nm! Thanks to that, the SQ7 will hit 0-100km/h in a sportscar slaying time of 4.8 seconds.

While the new Audi A4 will compete against usual suspects like the Mercedes-Benz C-Class, BMW 3 Series and Jaguar XE, the SQ7 will lock horns with the Range Rover SVR and BMW X5 M in the country.