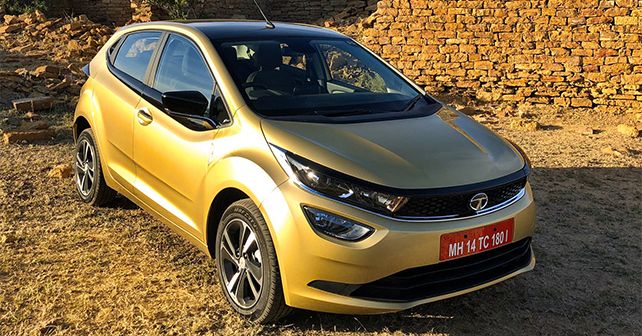 Scheduled to be launched in January next year, the Tata Altroz comes with a 1.2-litre 3-cylinder petrol motor and a 1.5-litre 4-cylinder diesel. Bookings to commence soon. Expect the pricing to be in the Rs 5 – 8 lakh range.

Nearly two years after showcasing the 45X concept, Tata has finally given us the first glimpse of its production-spec iteration, the Altroz, at the official media drive. Just like the Harrier before it, this new hatch also looks identical to the concept it's based on.

It sports a sharp and wide smiley face with a black honeycomb grille, a wide front bumper, and narrow pulled-back headlamps. Along the sides, the wheel arches are prominent and the shoulder line is sharp. The Altroz sits on dual-tone alloy wheels. The pinched tailgate looks chic and is reminiscent of the Harrier’s rear. In terms of dimensions, the Alteroz is 3,990mm long, 1,755mm wide, and 1,523mm tall and has a wheelbase of 2,501mm.

The Altroz marks Tata’s entry into the premium hatchback space. Also, it's the first car to be based on Tata's new ALFA platform. At the heart, the Altroz will come with two engine options – a 1.2-litre 3-cylinder petrol and a 1.5-litre 4-cylinder diesel. Both these engines will be BS-VI compliant right from the time of the launch. The petrol motor is good for 86 horses and 113Nm, while the diesel produces 90bhp and 200Nm. Both engine variants will only come with a 5-speed manual to start with. An AMT may be introduced at a later stage. Just like the other Tata offerings on sale today, the Altroz will also come with Eco and City driving modes. Braking duties will be performed by discs at the front and a drum setup at the rear.

Once launched, the Altroz will compete against the likes of the Maruti Suzuki Baleno, Hyundai Elite i20, Toyota Glanza, and Honda Jazz. Expect it to be priced in the Rs 5 – 8 lakh range.