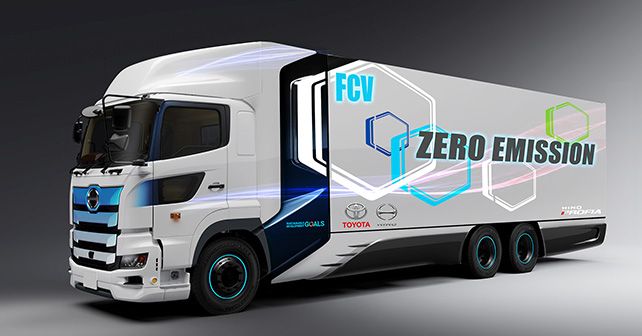 Based on Hino’s Profia model, the truck will have two fuel cell stacks giving it an overall driving range of about 600 kilometres. For increased efficiency and driving range, major weight-saving measures are also being employed

Toyota Motor Corporation has agreed to jointly develop a heavy-duty fuel cell truck with its subsidiary, Hino Motors Ltd. This move comes in line with the Toyota Environment Challenge 2050, that the company announced in October 2015. Toyota has committed itself to reduce carbon dioxide emission by 90% by 2050. In Japan, heavy-duty trucks are responsible for nearly 60% of carbon dioxide emissions. Electrifying commercial vehicles is a lot more complex than passenger vehicles, given that it must score well in practicality, load-carrying capacity, cruising speed and above all, driving range.

The fuel cell truck being developed by Toyota and Hino will be based on the latter’s Profia model. It will be underpinned by a newly-developed chassis with special attention paid to packaging and weight reduction. This fuel cell truck will make use of a two fuel cell stacks that have been developed for the Toyota Mirai. The Japanese carmaker claims that the truck should have a driving range of 600km.

While a lot of carmakers still don’t believe in the hydrogen fuel cell as an alternative to regular fuel, Toyota has been committed to it for a while now. In fact, Toyota and Hino have been working towards this common goal for more than 15 years, since the time they jointly showcased a fuel cell-powered bus in 2003.

Toyota is not the only carmaker to look at hydrogen fuel cell tech for its future products. Audi and Hyundai have already joined hands to make developments in that area and a few years back, Mercedes-Benz too started delivering GLC F-Cell to customers in Germany.