A legend known as Ford Mustang 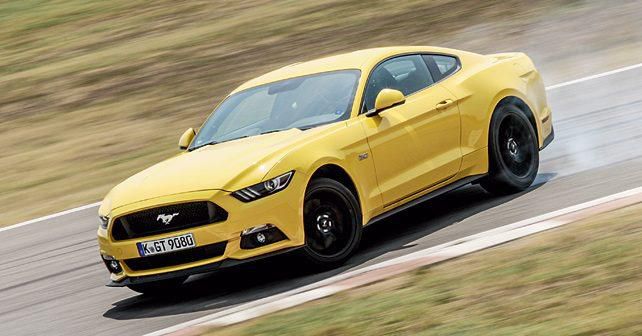 The Ford Mustang is the archetypal all-American muscle car – and it could well be coming to India. So, should we be salivating at the prospect of driving a legend?

A plate on the dashboard, in front of the passenger seat says, “Mustang, since 1964.” This is the sixth generation of this American muscle car – and it’s the first one that’s made its way to the scrutiny of our test track. We’ve tried previous models outside the confines of our test centre, and it’s always been with a touch of curiosity and enthusiasm. The current car is a brand new one, and one that breaks free of many traditions that have remained unchanged for many years (this one finally gets independent rear suspension, for instance). Ford engineers started with a clean sheet of paper, and the result is commendable.

ECHOES OF THE PAST

The Mustang is undoubtedly a good-looking car, with strong road presence. The proportions are right: long hood, relatively rearward position of the cabin, and a fastback tail – a typical feature of this coupe since 1967. Large 19-inch wheels shod with extra-large tyres complete the job. The classic ‘shark-mouth’ grille is also prominent, and so are the three slanting elements near the headlights – part of the style that the Mustang can’t do without. In short, this car is a true blue American from every angle. 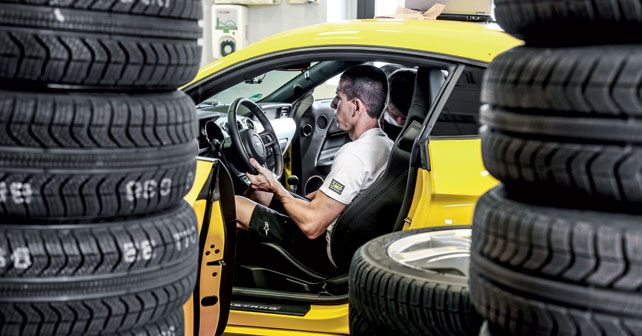 Even on the inside, it hasn’t given up on tradition. There are many references to the Mustangs of the 60s – although revisited in a modern way. The steering wheel, for example, retains its typical shape – while the instrumentation provides two large gauges, separated by a big multifunction display. The driving position is unusual – you sit low down with your legs tucked well under the dashboard, which can create some difficulty of access because there isn’t much space between the steering wheel and the seats (which, in this case, are the optional Recaros). You can get around this problem by sliding the seat backwards every time you get out, but that’s neither practical nor convenient. Once settled, however, you feel immediately at ease. Even if, in reality, there’s another small problem – you can’t see much! From the driver’s seat, the bonnet looks even more impressive than it actually is. It does take some getting used to, but at least the bonnet of the Mustang proudly stretches out in front of you – so the boundaries of the car are well defined. Meanwhile, in the centre console sits the Sync 2 multimedia interface – below which is the engine start button and four chromed levers in a vague retro style.

A little further along the central tunnel, there’s a short manual shift lever (only 10 centimetres long) – which opens up a whole new world. The increasing inclination of carmakers to opt for automatic transmissions is rendering the clutch pedal to the pages of the history books. But Americans are now rediscovering the joy of driving a manual. Perhaps it’s no coincidence that Porsche continues to offer its sport cars with manual transmissions, and that the Jaguar has recently dusted off the F-Type and slotted in a manual – well, at least in Europe. Manual driving is ‘cool’ again in the West, and, on the Mustang, the small lever moves a nice six-speed Getrag MT82 gearbox by grafting short and precise throws – like those of a nicely tuned race car.

First to second is a pleasure to the ears. Then there’s third and fourth, which are still very close to each other. Fifth is a little bit longer (all the way up to 250km/h), and sixth is longer still – designed only in order to limit the noise and fuel consumption during highway use.

The Mustang is a beautiful car, which doesn’t mind being mistreated on the track. Fortunately, it’s not bad on the road either. The latest changes have made the V8 engine even more thunderous, not to mention efficient. The engine sounds fantastic. At low revs, it seems to doze off – but it’s easy to wake it up. In fact, the more you press the accelerator pedal the more addictive it becomes. Above 4,000rpm it transforms. It becomes angry and even more powerful – until the limiter cuts in at 6,900rpm. 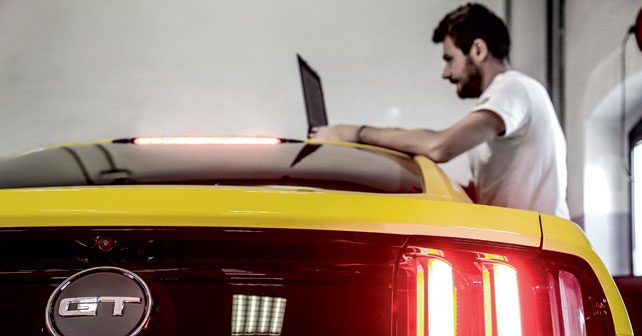 Of course, you do have to do some work with your hands and feet – but that’s the price you pay for a bit of fun! The pedals, made from bare metal with rubber inserts, allow for easy heel-and-toe operation – a technique now forgotten, but essential for perfect rev matching. The Mustang evokes a way of driving that’s inspired from the past – it allows you to bask in all its cutting edge technology but also savour the joys of motoring from a bygone era. These emotions have become dormant over the years because of the increasing use of paddle shifters and other electronic wizardry. Don’t forget that the Mustang has 413 horses that each have to be manually managed – and there’s a great satisfaction in that! With a little bit of sensitivity, and using launch control, we managed to pull off a beautiful 5 second (flat) run to 100km/h from a standstill – and extending that all the way to 200km/h in a little more than 16 seconds.

The new Mustang has abandoned the old-fashioned, but typical, solid rear axle. It now boasts a sophisticated multi-link rear end for the first time – made entirely of aluminium. And the difference is immediately perceptible.

The structure is firm, but not too hard. It has excellent handling, without sacrificing too much ride comfort. That’s also thanks to the steering, which is precise and progressive – in fact, it plays a decisive part in the driving pleasure of this coupe.

The brakes also surprised us in a good way. The pedal has a short travel and requires some effort, but it pays off with remarkable sensitivity. The feeling it provides is aggressive – like the best European sport cars. The brakes have a great ability to resist fade and did not suffer even on the track during the timed laps. In fact, the Mustang stopped the clock at quite a respectable time (see box). Between the curves, the car showed great character. It’s very quick through the tight bends, and has only minimal understeer. Thanks to the electronics and mechanical limited slip differential, you can tap all the horsepower of the V8. And the multi-link helps even more at high-speed. Pushed to the limits, the Mustang provides a great deal of security and follows its indented line with great accuracy. The ESP system too, when called in to intervene, does so with speed, precision and discretion.

Obviously, with a V8 engine of this capacity, it’s extremely easy to annihilate the rear tyres. The Mustang even has a device that locks the front wheels. So, standing still, you can spin the rear tyres to oblivion. According to the information released by Ford, it’s “a manoeuvre that can be used to warm up the tyres...” Well, it is a muscle car after all! 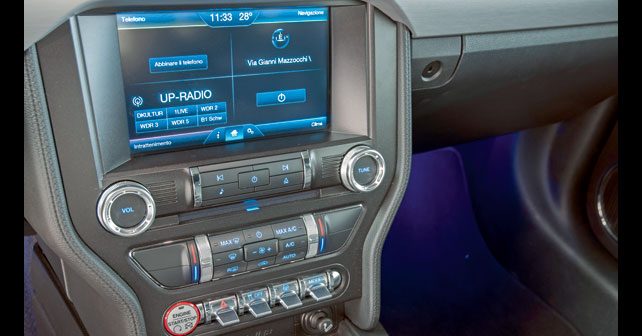 The Mustang comes with Ford’s most advanced infotainment system – Sync 2. The layout is simple, personified by its block logic function (telephone, multimedia, navigation and air conditioning). It has four coloured bars at the edge of the display that can be used to pass directly from one function to another. The fact that all four bars are constantly present is very convenient, and ensures that you don’t get lost in menus and submenus. There’s also a Home button at the bottom of the menu, which is also always present to reassure the driver. To improve the man-machine interface, Ford engineers have also set a wide group of voice commands – they claim the system is advanced enough to use free phrases rather than specifically structured and pre-arranged ones. But while this may be true in theory, in reality it’s not quite as obedient as you’d expect. 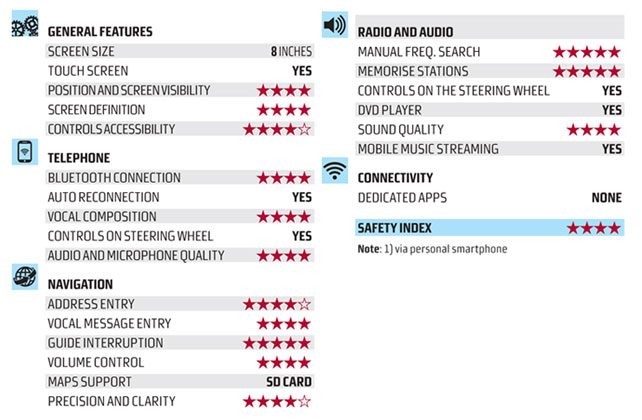 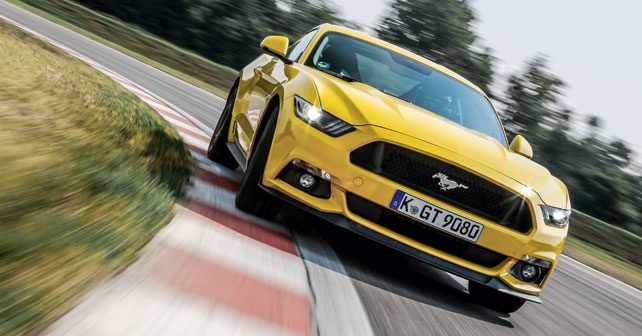 The Mustang finds a very good compromise between comfort and performance. It’s quite compliant on the road, and it holds its ground quite well when we pushed it to the limit at the Vairano handling track. In the fast corners, the slight understeer gives you a sense of security, while in the slow-medium corners you can power out of corners with great confidence thanks to the grunt available. The power management is extremely simple to control, thanks to the linear nature of the naturally aspirated V8. The car steers well, is plenty fast, and gives the driver a good feeling from behind the wheel – all of which allows it to be quite comfortable when pushing it on the track. The brakes too do their job pretty well and provide good feedback. The timing puts it immediately behind the Jaguar F-Type S. 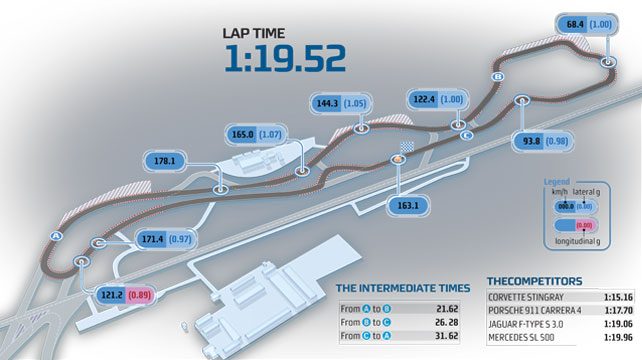 American sport cars have continued to evolve, and now – even while retaining unbeatable value-for-money – they deserve attention and respect from a technical point of view. After all, they’re now also designed for the needs of the global market. Thus, the head and crankcase of the 5.0 V8 is in aluminium. It also has four camshafts with dual variable valve timing.

The intake ducts are of variable geometry – with mechanical butterflies that are partially closed at low speeds to improve combustion. The four valves per cylinder have a diameter of 37.3mm on the inlet side and 31.8 on the exhaust. The connecting rods, lighter and more resistant, are forged. The cars destined for Europe all have the Performance pack, with strut braces, reinforced suspension and Brembo brakes that provide 380mm ventilated front discs and six-piston calipers. In the rear, the ventilated discs measure 330mm.

Compared to the previous generation, the body is moulded in nine pieces – instead of 14. For greater accuracy, special steel and aluminium (for the bonnet) has been used. Furthermore, the use of the laser welding contributes to the rigidity of the structure, which has increased by 31%. 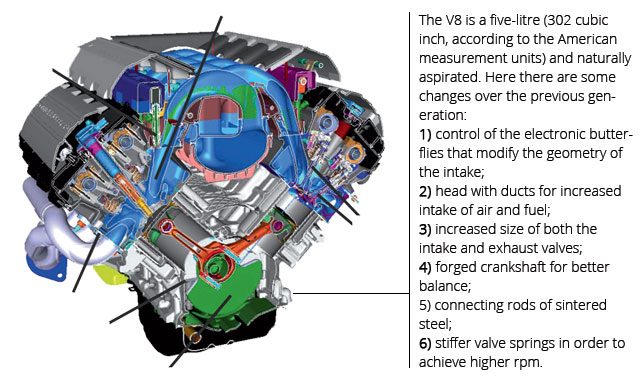 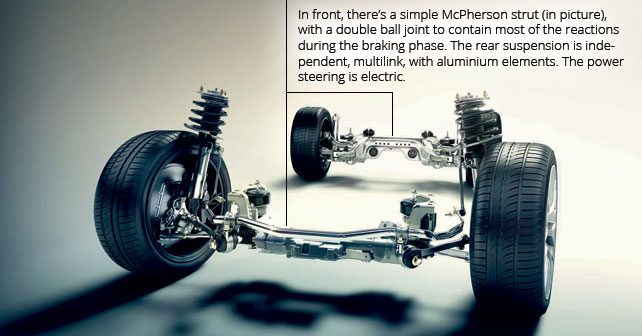 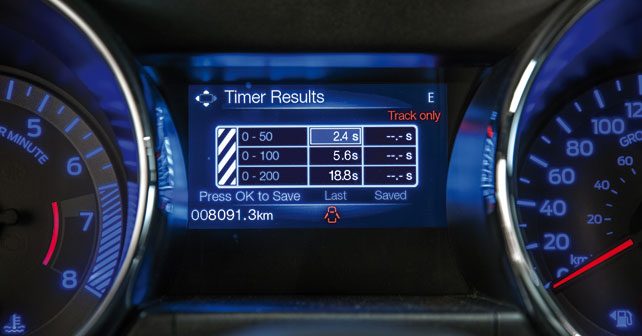 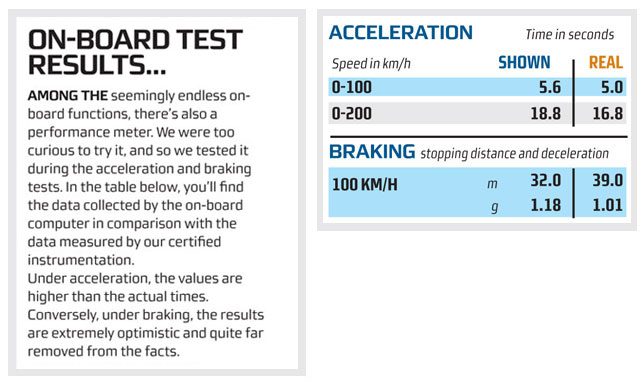 Made in
• Flat Rock (United States) 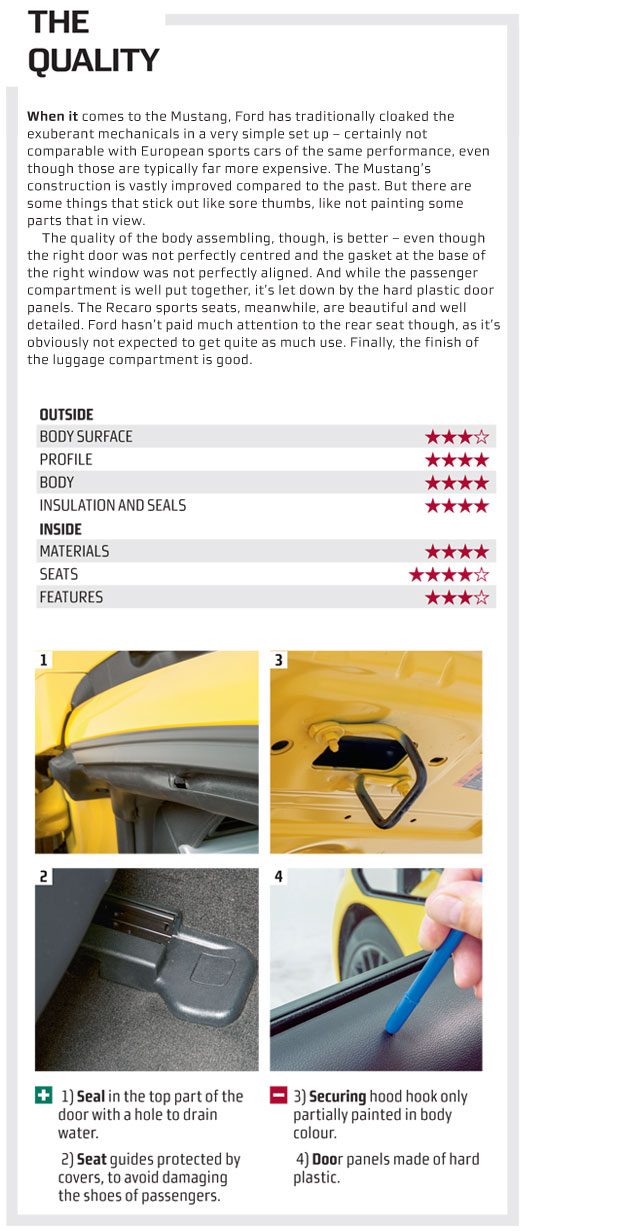 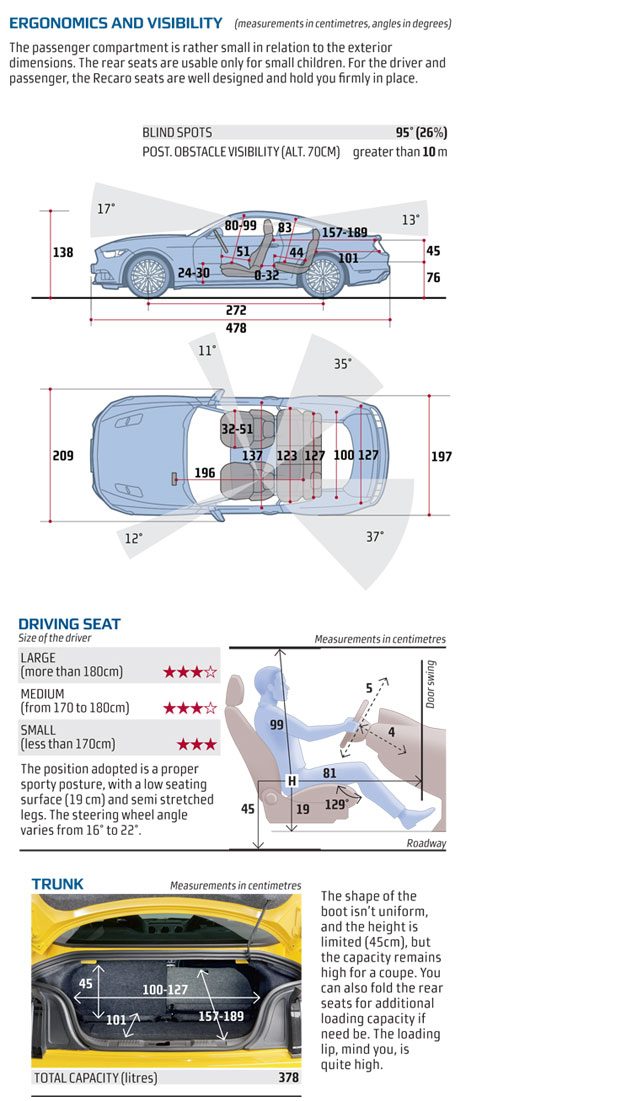 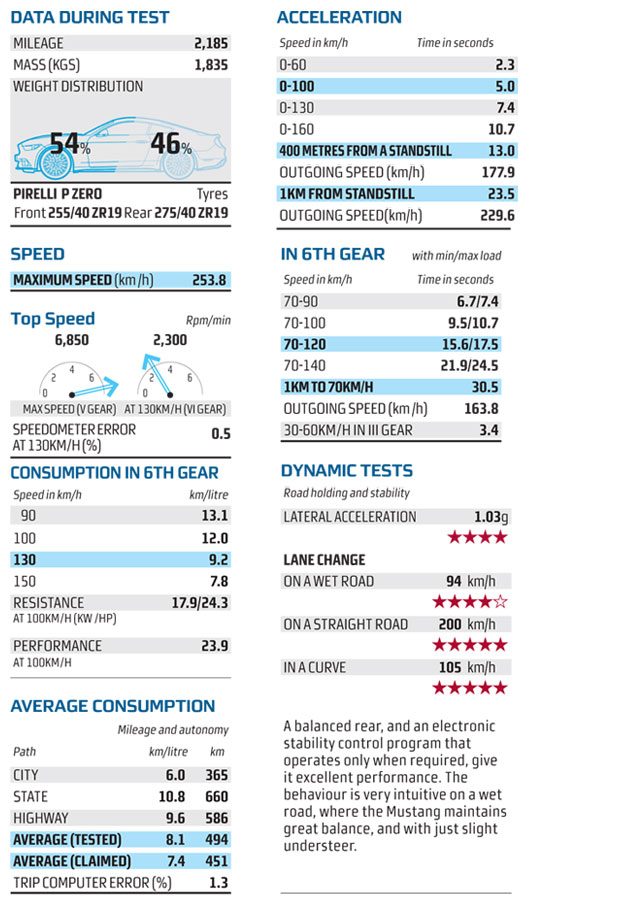 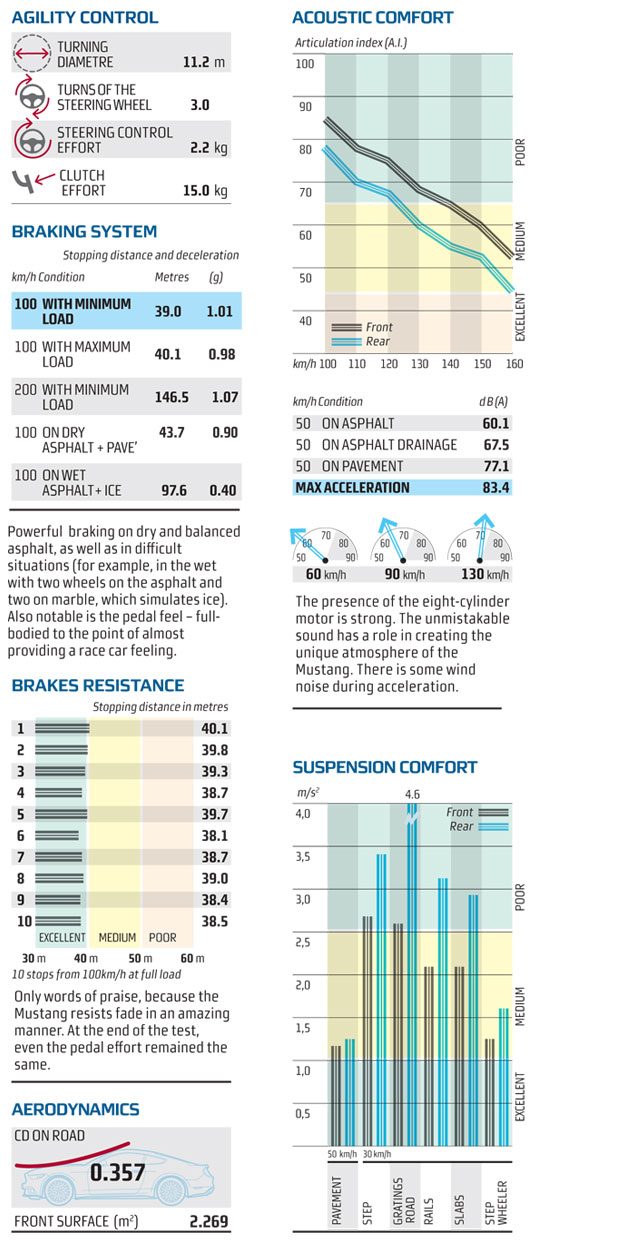 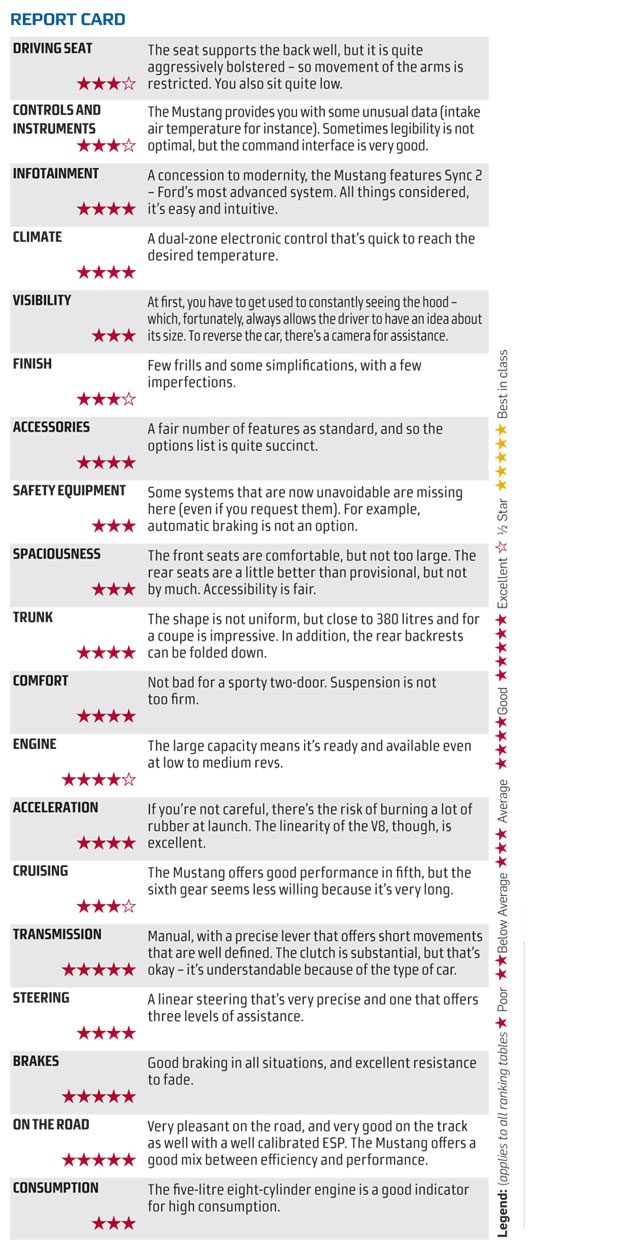 Moray Callum, Ford Motor Company Vice President and Head of Design, tells us how the sixth generation of the Mustang had to be one hundred percent American – with no exceptions. Everybody was asking for this, from all over the world.

“On the other hand, when you have to redesign something that’s made history, you can’t ignore the past. The important thing is not to do a simply retro operation,” Callum told us in a recent interview.

And this Mustang, undoubtedly, looks ahead. Under a very American cover, it hides an on-road character that’s first rate and as good as the best from Europe. Just look at the report card – the brakes get five stars, while the engine, steering, and acceleration all get four stars. There’s enough there to arouse some envy from the most famous brands in the automotive world. 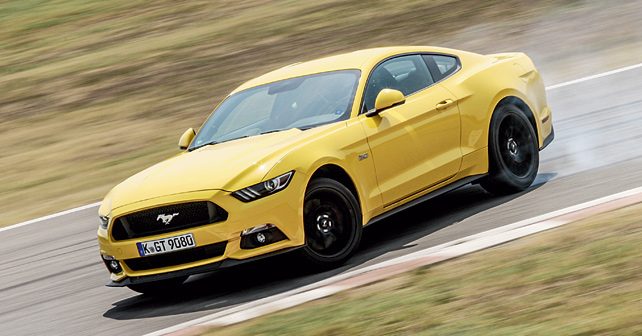 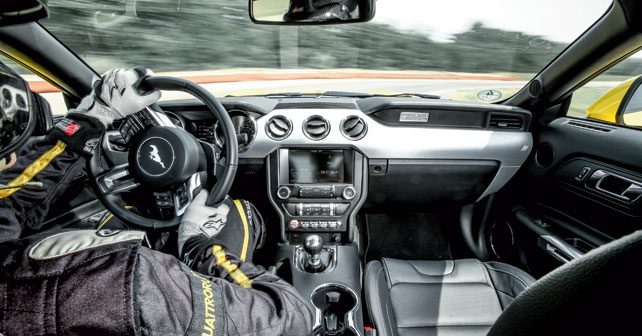 At the bottom of the centre console, alongside the engine-start button, are four levers that control the hazard lights, the electronic stability control, the setting of the steering, and, finally, the lever to choose between the available four driving modes. 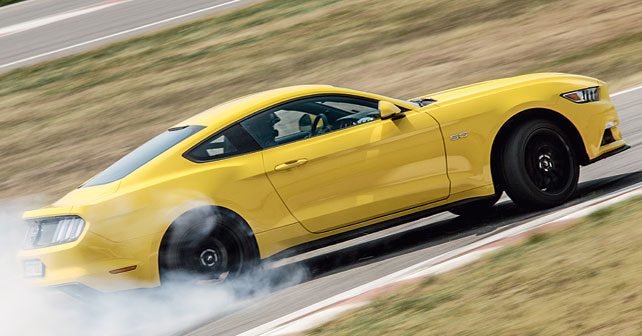 Turn off the traction control, and you can turn the tyres to smoke in no time…