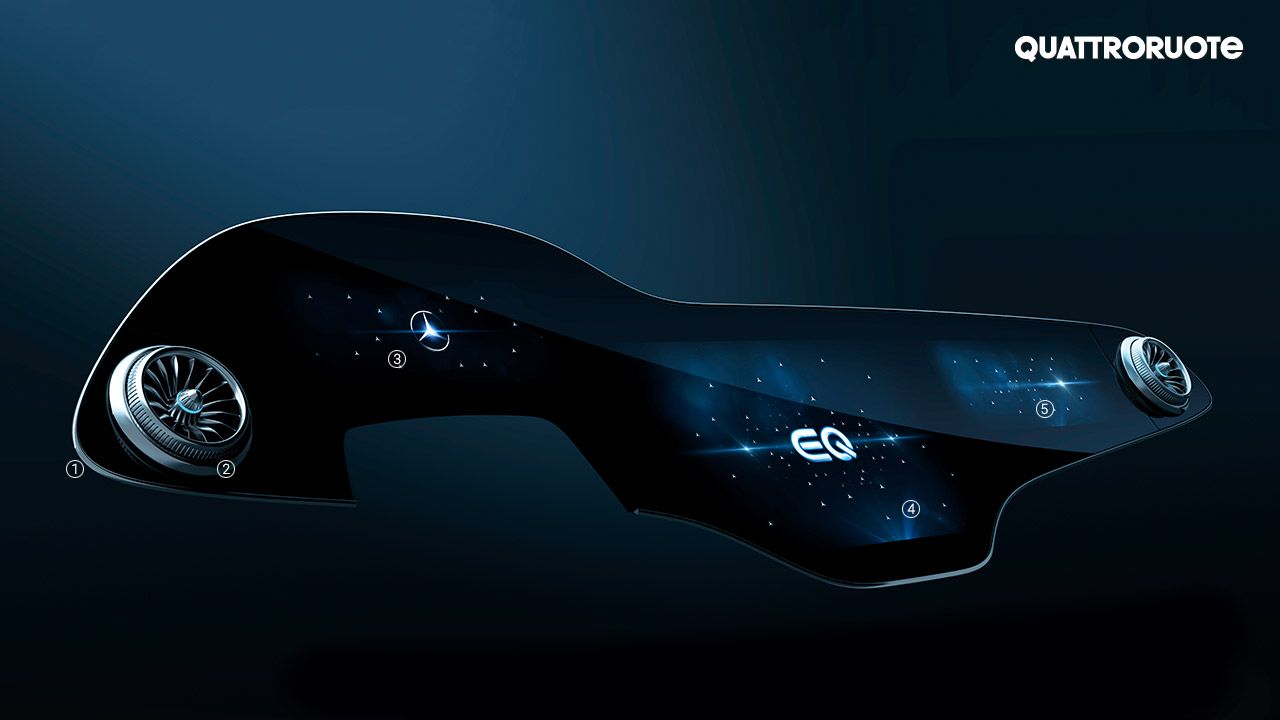 Stuttgart has upped the ante by introducing the MBUX Hyperscreen – the latest evolution of its infotainment system. It will be available on the EQ platform and will change the rules of the game in terms of size, usage, and deep learning.

To ask a creator about their product is like going to a fancy restaurant and asking the manager if their wine is any good. However, after listening to executives, marketing people, and designers’ hyperbolic bombast about the characteristics and ambitions of their new models for a while, we’ve learnt a bit about distinguishing between those without any foundation and those based on objective facts.

This brings us to the topic at hand. Although Gorden Wagener’s latest creation really is grand, it’s not without more than a few arguments to back its claims. ‘The MBUX Hyperscreen will make all cars that exist today look old,’ said the Mercedes designer during the (virtual) meeting with the international press, which followed its debut at this year’s CES, which itself was organised virtually and not in Las Vegas as usual. 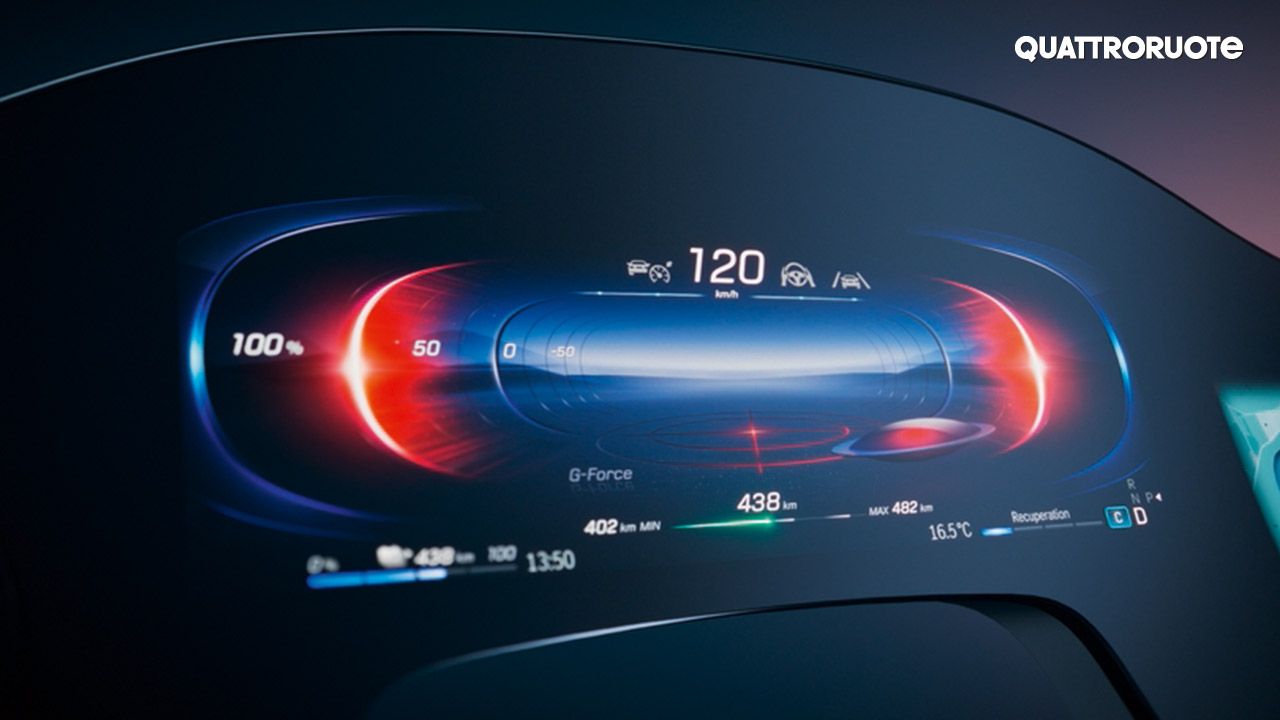 A boastful statement, of course. So, let’s see if there is evidence to support this claim. Well, the object in question – the latest incarnation of Merc’s infotainment system, which has changed the course of the brand’s interior design – doesn’t like half measures. In fact, it likes to go all the way – the Hyperscreen, quite simply, goes beyond the concept of a dashboard, replacing it with that of a single screen.

Under its curved glass surface, which extends from pillar to pillar – a width of 1.41 metres – and occupies an area of 0.24 square metres, there are three separate displays: an instrument panel, a central display, and one dedicated to the front passenger. The last two are backed by OLED technology. The third one, if the passenger seat is not occupied, remains inactive, displaying a decorative digital star pattern, which will remind you of the livery of Mercedes-AMG’s Formula 1 cars. 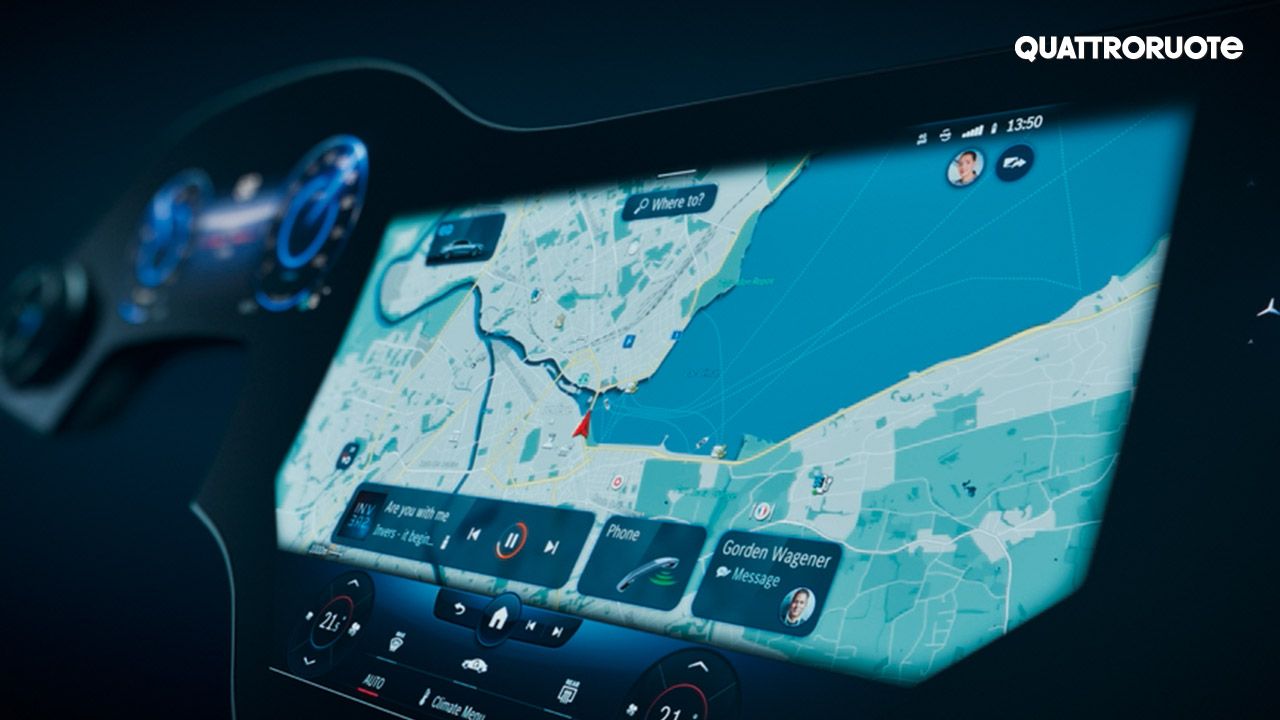 The operating system of the Hyperscreen is just as radical – its interface doesn’t have a traditional homepage but what Mercedes calls the ‘Zero layer’ concept. What it essentially means is that instead of a main screen, it will display the most relevant content based on what the artificial intelligence (AI) learns over time about the habits of the driver (and of six other users, since it supports up to seven different profiles) and the operational context.

With the help of the AI, it allows you to manage over twenty different functions – ‘magic modules’ is what Mercedes calls them – which include from setting your daily agenda to making a call and from media playback to birthday reminders. The only function that always remains at the centre is ‘navigation’.

Regarding the application of the Hyperscreen, which will make its debut in the summer with the EQS, it seems, that the company has already set its priorities. ‘We wanted to offer something special to the average, more tech-savvy Mercedes EQ customer,’ says Wagener. Wait, but what about the traditional models? He adds, ‘That will be decided on a case-by-case basis, based on demand, feasibility, and affordability.’

1. 650° C
It’s the temperature at which the enormous curved glass surface of the MBUX Hyperscreen is moulded. It’s necessary to guarantee a perfectly homogeneous area, without any distortion, for the entire width of the screen.

2. PHYSICAL ELEMENT
The vents at both ends of the screen link it to the physical world. The Hyperscreen has also been designed with practicality in mind: the cover glass has a double-coating to facilitate cleaning and contains a part of aluminium silicate, which makes it ‘gorilla glass,’ resistant to shocks and scratches.

3. TRAVEL KNOWLEDGE
Eight-core CPU, 24 GB RAM, and 46.4 GB per second of bandwidth – enough power for advanced system functions. Like the one called ‘Travel knowledge’, which evaluates data from maps and collected by sensors around the car to provide information about buildings, landmarks, clubs, or entire cities. All you got to do is ask, ‘Hey Mercedes, what’s the name of the restaurant on the left?’

4. TWELVE ACTUATORS
The central display measures 17.7 inches and offers haptic feedback to confirm that a command has been received. To ensure this, there are twelve actuators to trigger vibrations. On the screen, the navigation feature always remains in the foreground. The ‘Zero layer’ menu is the bottom strip, which shows different content depending on the context.

5. IN CASE OF AN ACCIDENT
The Hyperscreen has been designed to behave specifically in the event of a frontal impact. Behind the Hyperscreen, there are predetermined breaking points and five holders, which yield in a targeted manner, thanks to their honeycomb structure.