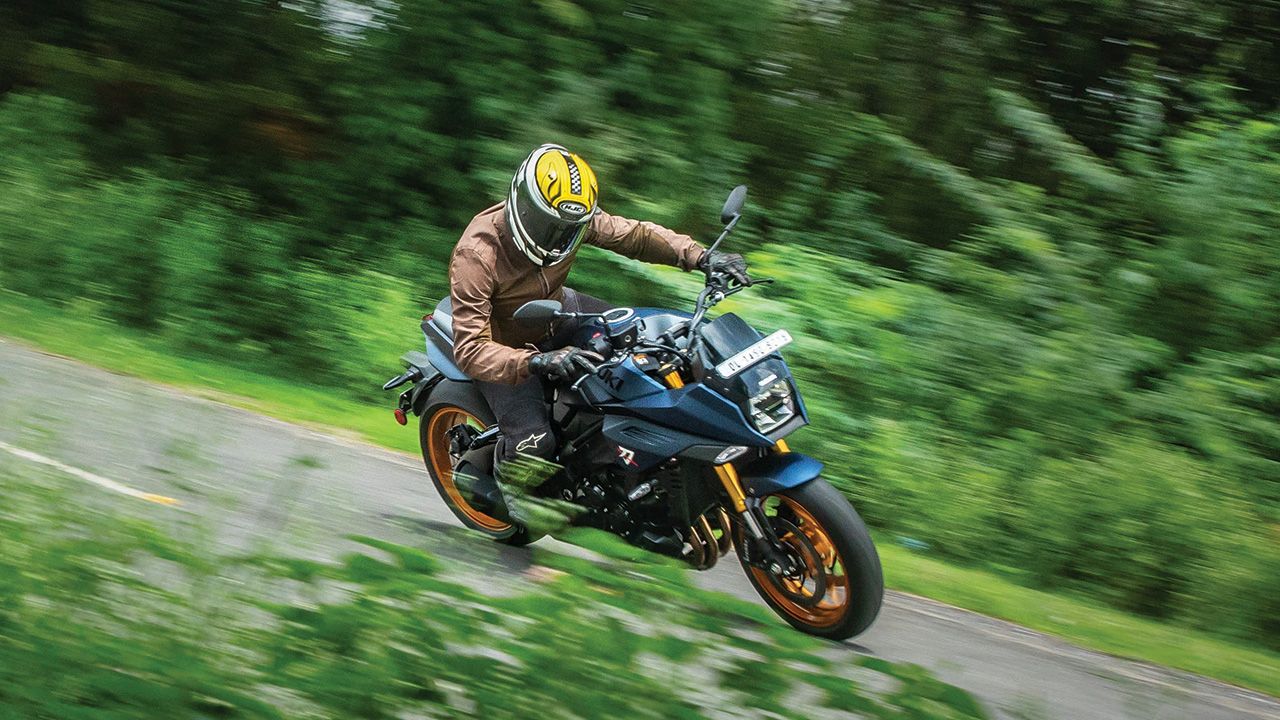 The legendary Suzuki Katana swings back into action! An icon reborn or a lazy rehash job? We find out.

The idea of cashing in on the success of past hits isn’t something new. Be it movies, music, or motorcycles, there have been countless attempts that promise to take you back to the La-La land of the past. Suzuki is trying to do something similar with the new Katana, which very recently landed on our shores.

For the uninitiated, the Katana name goes all the way back to the 1980s when the original Katana, the GSX-1100S, made its world debut. While not a huge commercial success, the Katana is considered to be a stepping-stone for modern sports bike design. It kick-started a trend of radically styled motorcycles and encouraged others to be more imaginative, to go beyond those age-old, staid design templates. 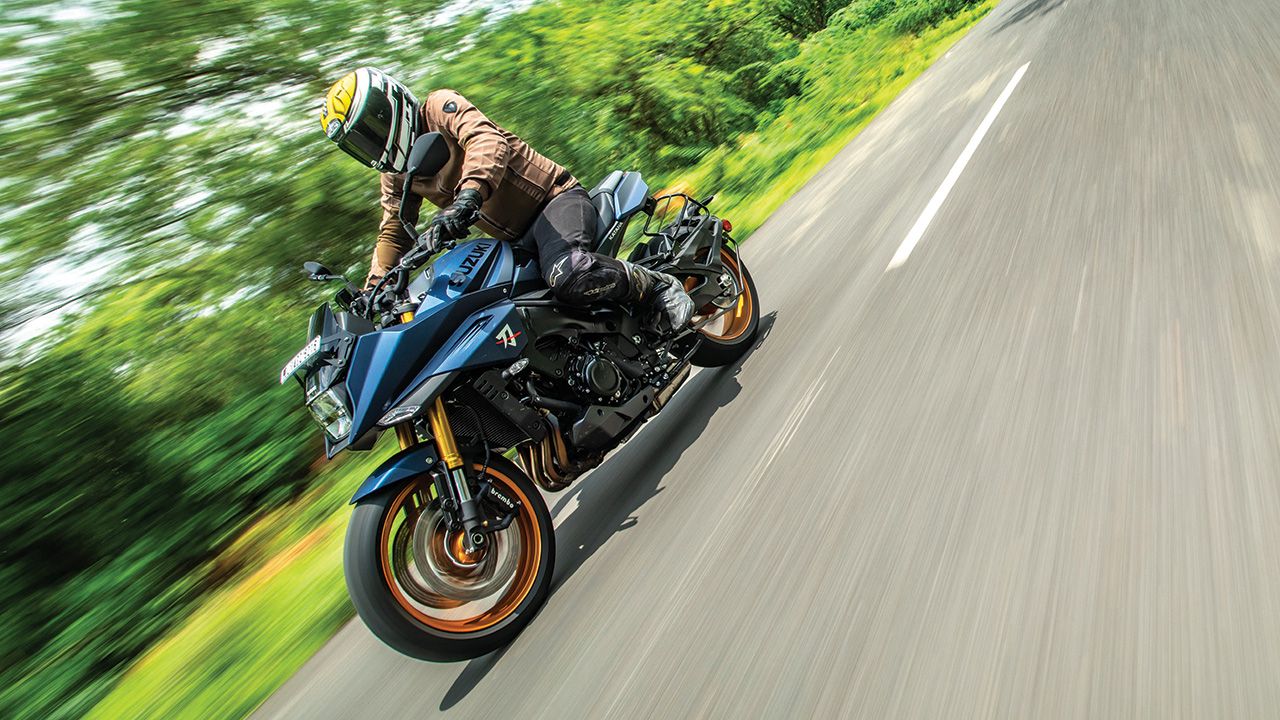 Suzuki ran the Katana nameplate from 1981 to 2006, making it available in multiple engine options across segments. It has to be said, though, that not all Katanas were as sharp as the original – in fact, some of them were downright duds. So, Suzuki pulled the plug on it, which indeed was the right call.

And then, 13 years later, Suzuki decided to bring the legendary Katana nameplate back – the wraps came off the new-age Katana in 2019. Now, the very same motorcycle – with some minor updates – has arrived in India as a 2022 model. But the question remains – is this remake better than the original?

The 2022 Katana is a throwback special – a modern interpretation of the original from the eighties. It’s no wonder, then, that it mimics its forefather’s style and appearance unashamedly. Like the Katana of yore, the new one also features sharp and rakish creases, along with a boxy front-end and squarish headlamps – I quite like it. However, I like the overall taut proportions and that stubby rear end even more. The attention to detail is impressive, too – those ‘Katana’ badges on the front fairing and handlebar scream its glorious past. And, in this matte blue paint scheme that you see here on these pages, clubbed with those tasty bronze wheels, the Katana undoubtedly cuts a striking figure.

Now, I know that many on the internet find it to be an odd-looking thing, but believe you me, it looks stunning in the flesh and, not to mention, very unique, thanks to its neo-retro sci-fi design – it’s like watching the sequel of an 80s blockbuster in 4K instead of 480p. That’s how refined the new Katana’s styling is – you might as well call it Suzuki’s Top Gun: Maverick moment. 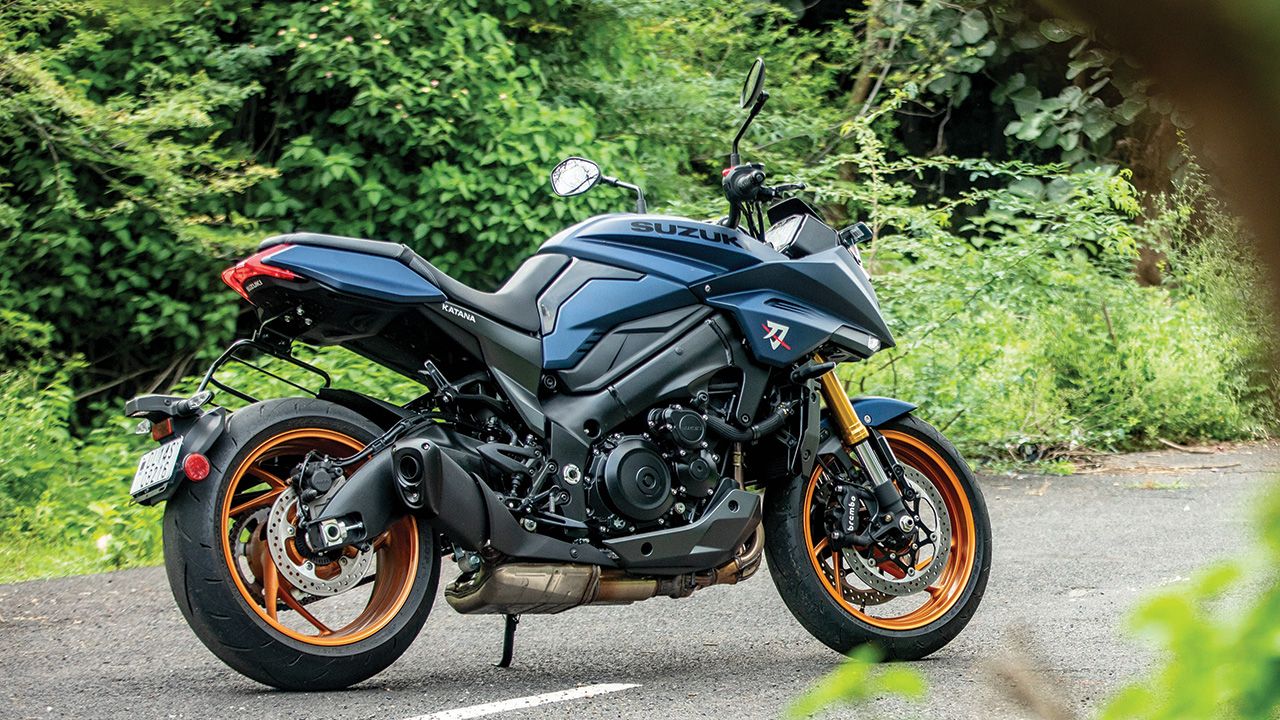 'It’s like watching an 80s blockbuster in 4K instead of 480p. call it Suzuki’s Top Gun: Maverick moment'

However, not everything is rainbows and butterflies with the Katana. There are a couple of things that aren’t quite right. For instance, the fuel tank’s capacity is only 12 litres, which leaves it with a vastly compromised range of around 150km. Similarly, the quality levels could have been better, as there are weld points that are glaringly visible. On the whole, however, the fit and finish levels are up to the mark but definitely not as great as a Ducati or a BMW. And then there is the case of a pretty basic all-digital LCD instrument cluster, which I, personally, don’t think is a deal-breaker, but then other buyers may not be as charitable, especially in this day and age of colourful TFT displays. That said, for its price, the Katana’s standard feature list – which includes fully-adjustable suspension, a quick-shifter, all LED lighting, and so on – is pretty impressive.

Headlined by a 999cc inline-4 screamer, the Katana is good for 150bhp and 106Nm. Of course, by current super-naked standards – which easily go beyond the 200bhp mark these days – most will consider the Katana’s power and torque outputs to be below expectations. On top of that, this engine isn’t all-new – technically, it’s a 17-year-old unit. But, then, it’s not just any engine. It’s derived from the 2005 GSX-R1000 superbike or the K5, which is considered to be one of the greatest litre-class superbikes in history. Want to know how good that engine was? Well, rumour has it that back in the day when BMW was developing the S 1000 RR’s inline-4, they benchmarked it against the K5’s engine. Must be a decent unit then, don’t you think?

In the current guise, the K5’s long-stroke inline-4 engine has received many updates to make it comply with the current emission norms. So, it’s cleaner and a little less violent now. That’s not to say it’s docile though, for it’s still a force to reckon with! 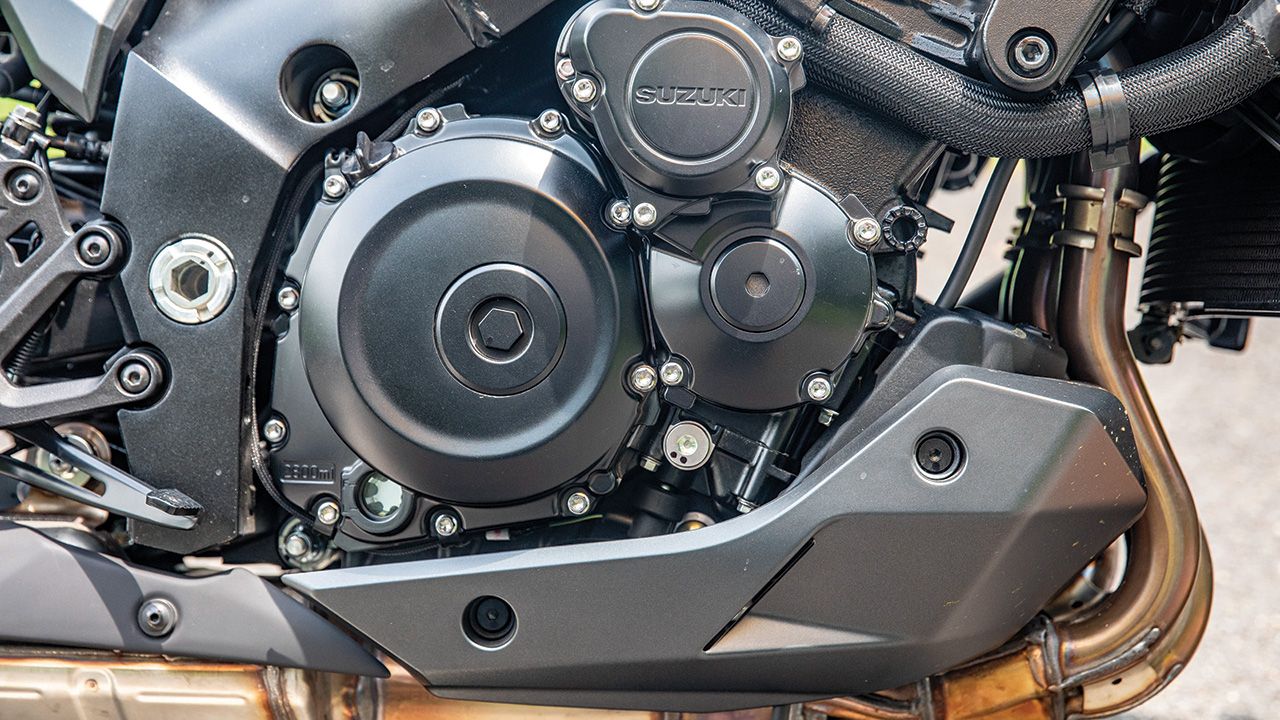 'Its engine is derived from the 2005 GSX-R1000 K5, which is considered to be one of the greatest litre-class superbikes in history'

At idle, it hums like a meditating monk, and on the move, it’s velvety smooth. Torque starts to pour thick from as low as 3,000rpm. The power delivery is smooth, and its close-ratio gearbox allows you to ride at low speeds in higher gears without any trouble. The engine puts the power down in a neat and nonchalant manner until you decide to rev it harder – as you go beyond 6,000rpm, the monster awakens and how! Put simply, the Katana’s motor feels tame, flexible, and friendly at low speeds, but once you rev it past the 6,000rpm mark, you’re thrown ahead like a lamb to the slaughter! The acceleration is vicious, with that typical spine-tingling fervour of a litre-class crotch rocket. Couple this with a deep induction growl and a screaming inline-4, and what you get is a bike capable of putting you in a state of sensory overload.

The electronic suite on the Katana is pretty basic – you get a ride-by-wire throttle, non-switchable ABS, three riding modes, and five levels of traction control (+Off). These aren’t IMU-based, meaning the TC and ABS aren’t lean-sensitive. These things may deter some buyers, but in all honesty, the Katana is a well-behaved motorcycle – it’ll always save your face unless you decide to do something really, really stupid.

The Katana features a twin-spar aluminium frame – which it shares with the GSX-S1000 naked – along with a fully-adjustable suspension (a 43mm KYB fork at the front and a mono-shock at the rear). The motorcycle’s riding position is upright and relaxed, and unlike the original Katana, which was shipped with racy clip-on bars, the modern iteration gets a wide single-piece handlebar. The seat is wide and cushy. Plus, with a saddle height of 825mm and a kerb weight of 217kgs, it’s a relatively easy big bike to manage. 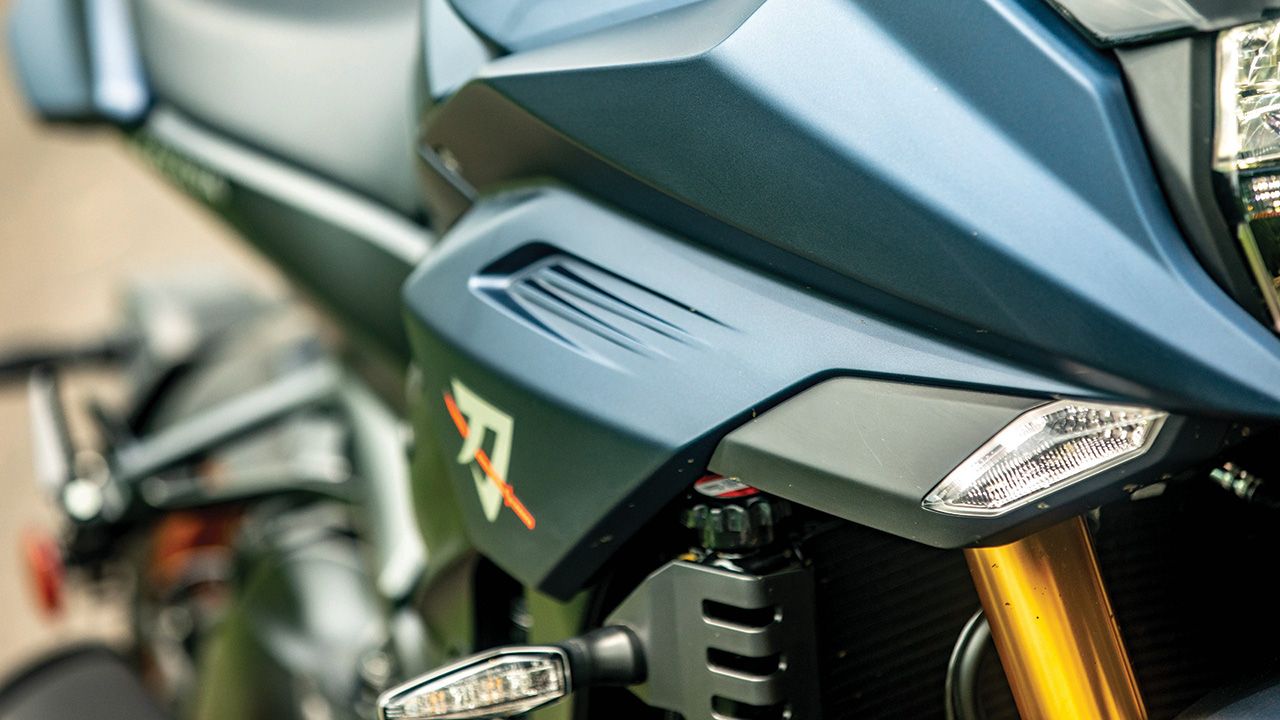 Now, despite its name, the Katana isn’t the sharpest tool in the shed. It doesn’t tip into corners with the sort of immediacy that’s characteristic of other modern-day naked bikes. There’s linearity in the way it changes direction though – a crisp and unhurried progression, I’d say. The front fork loads up nicely as you prepare for corner entry, and there’s a lot of feel and feedback from the front end as you track a corner. The rear shock, however, does feel a little soft for my liking – during the test, it exhibited a tendency to step out every time I tried to push or lean harder. It is, however, something that you can fix by tuning the suspension to your liking later on.

On the whole, while the Katana may not swing and strike like a thoroughbred litre-class motorcycle, its muted aggression makes it a great street bike. Even the ride quality is quite acceptable, for it’s not a back breaker by any means.

The 2022 Katana is a legend reborn, and of that, there’s no doubt. But to expect it to set the sales charts on fire or to gain popularity and stature of the original…well, frankly, it’s a bit of a tall order – which is the case with every remake. However, as a modern interpretation of the original, the new Katana is a solid job. The performance is punchy like a superbike, and it’s comfortable to ride everywhere. And what’s more, it looks icy cool on the streets.

And then there’s one last trick up its sleeve – its spectacular pricing. At ₹13.61 lakh, the Katana is a bargain-basement deal! There’s no other inline-4 motorcycle that offers superbike levels of thrills and performance, along with a heavy dose of nostalgia and old-school charm, at this price point. For me, this is a good enough reason to pull the chequebook out and seal the deal. Now, if only I had a spare ₹14 lakh lying around – a pity, indeed! 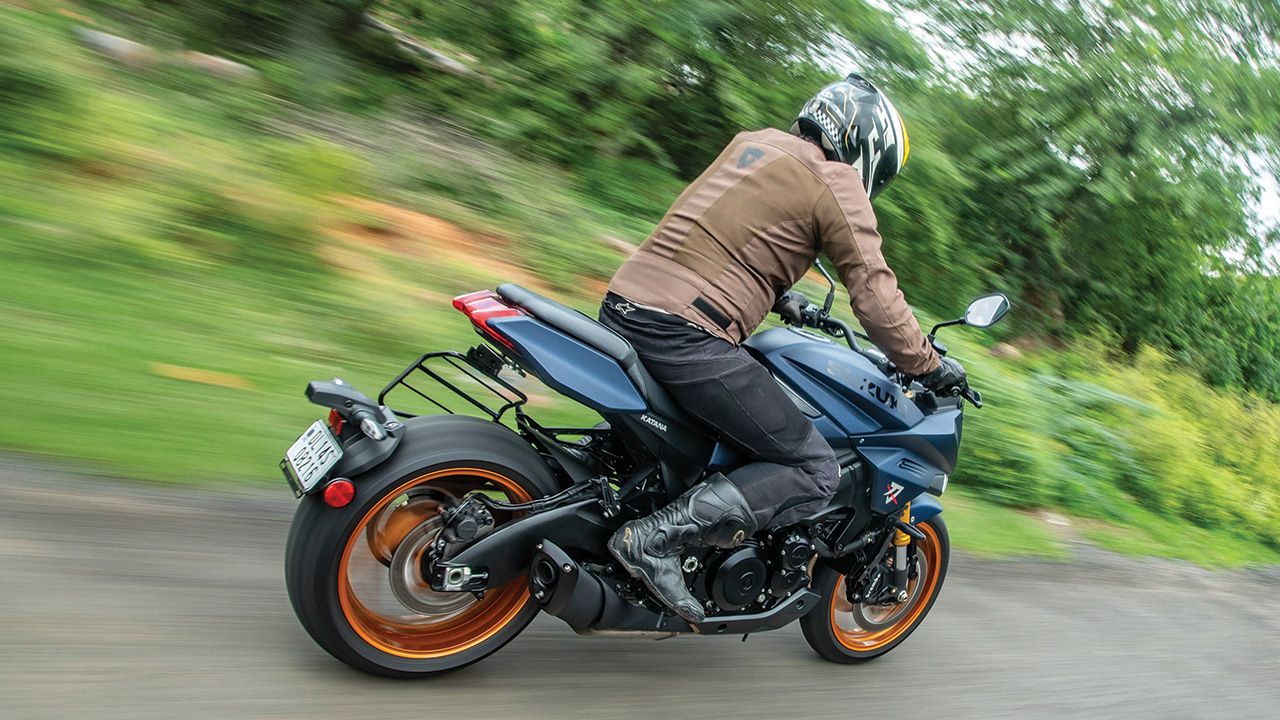 'The motor feels tame, flexible, and friendly at low speeds, but once you rev it past 6,000rpm, you’re thrown forward like a lamb to the slaughter!'

X-Factor: The Katana offers superbike-like performance without the accompanying compromises and a retro-cool sci-fi design at a tempting price. 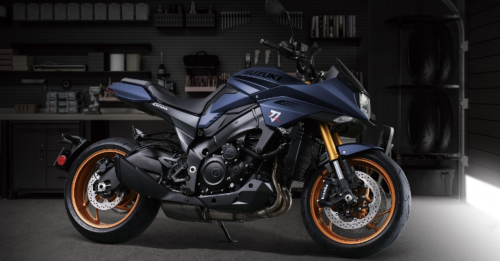