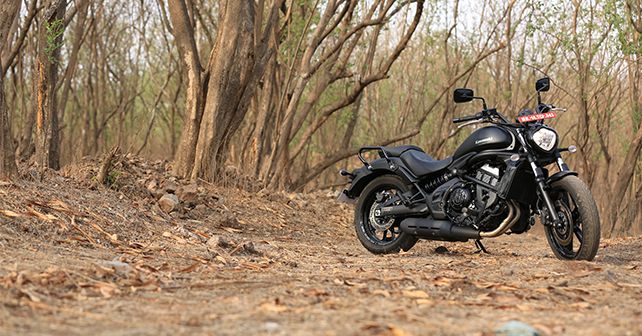 A cruiser should be big, American, have oodles of chrome and a throaty exhaust. Well, this one certainly doesn’t fit that description. So, what do we make of the Kawasaki Vulcan S?

The word ‘cruiser’ usually conjures up images of large motorcycles with oodles of chrome, a throaty exhaust and, most likely, American origin. Well, the Kawasaki Vulcan S is none of these things. It’s washed in black, doesn’t have a roaring exhaust note and is of Japanese genealogy. Also, it borrows its engine from a sports tourer. It’s true that all this makes it stand apart from traditional cruisers. But being different doesn’t necessarily translate to being better, so the question that arises is this – with all that it has to offer, will it be able to make a mark in the middle-weight cruiser segment? 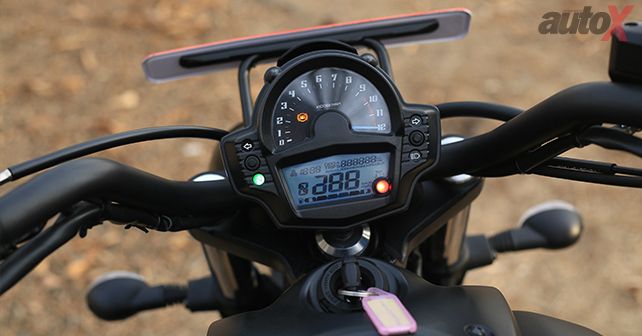 Many curves – some good, some bad

While the Vulcan S is definitely distinct from the rest, I personally have mixed feelings about its design. It does have a few likable elements, but then an equal number of elements stick out like a sore thumb. The motorcycle looks its best from the front three-quarter angle. The inverted triangular shaped headlight, the teardrop-shaped tank, the exposed chassis and suspension, and the alloy wheels, all combine to give it a genuine cruiser stance. From the back, however, the Vulcan doesn’t have much going for it. The rear fender looks awkwardly bulky and doesn’t blend with the front. The linear exhaust looks too geometric to go along with the rest of the bike, and the taillight doesn’t add much to the visual appeal either. The large grab rails and the saree guard further rob the tail section of much charm. There’s hardly anything to complain about in terms of quality though – fit and finish levels are just what you’d expect from Kawasaki.

The Vulcan S retains the same instrument cluster that we’ve seen on the old ER-6n. Composed of a large analogue tach and a small digital readout, it displays all the necessary information, including the gear position. In terms of equipment, the Vulcan S comes with ABS but misses out on a slipper clutch and ride-by-wire. 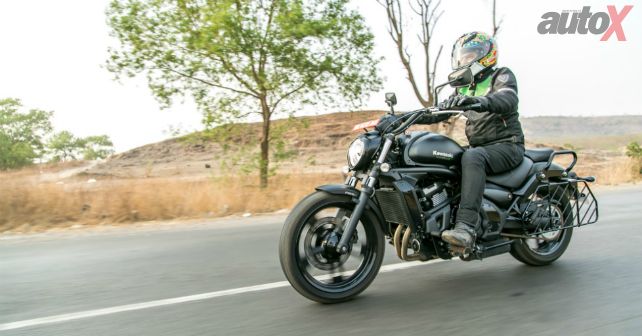 Although Kawasaki has used the same 649cc, liquid-cooled, parallel-twin from the previous generation ER-6n and Ninja 650, they have made some necessary updates to the engine to suit the dynamics of the Vulcan. An updated intake, ECU and cam profiles ensure that the Vulcan has good poke in its bottom end and feels ready to go from as low as 2,000rpm. Acceleration is brisk and the engine feels predominantly refined, except for a mild buzz that you feel past the 4,000rpm mark. However, due to the sporty nature of the engine, the Vulcan S does make its peak higher in the rev range. Its max power of 59.5bhp comes in as high as 7,500rpm, and the torque of 63Nm kicks in only at 6,600rpm. Moreover, the tach hits the red zone only post the 9,000rpm mark, which is way too high for a cruiser. To tell the truth, since the engine is punchy enough in its mid-range, odds are that you will rarely if ever, hit the redline. One thing that the Vulcan sorely misses out on, though, is a nice bass-y soundtrack. The exhaust has a nice mellow rumble to it, but the thump that cruiser buyers look for is absent.

The Vulcan’s 6-speed gearbox makes it brilliantly tractable – the shifts are smooth and precise and the ratios are superbly calibrated for both urban and highway riding. The Vulcan can trundle at speeds as low as 30km/h in third, which makes it rather easy to ride – even for the daily commute.

The Vulcan’s riding posture is almost perfect. The foot pegs are forward set and can be further adjusted to suit the rider’s height. The handlebar could have been a bit wider though, as it feels a bit cramped while making tight U-turns. The rider’s seat is wide enough to ride for long hours, and the low 705mm seat height makes life a bit easier for short riders. The pillion seat, however, is a bit too narrow to be comfortable.

For a cruiser with low suspension travel, the Vulcan’s ride quality is definitely a pleasant surprise. It cushions the roughness of the road quite effectively, but you must exercise caution over large potholes and speedbumps, lest you scrape the underbelly. Around bends, the bike remains equally composed and planted. Due to the 235kg kerb weight of the motorcycle, I expected it to be a bit lethargic while attacking corners, but it’s exactly the opposite. The weight is well distributed, and you can maintain a nice rhythm while riding in the hills. The foot pegs are reasonably high off the ground and don’t scrape them unless you fully commit to a corner.

Stopping power comes from a 300mm disc up front and a 250mm setup at the back. Brakes have good bite, and the ABS isn’t overly intrusive either. The Vulcan uses the same Dunlop tyres that the Ninja 650 comes fitted with. They provide a good grip without much drama during heavy braking. 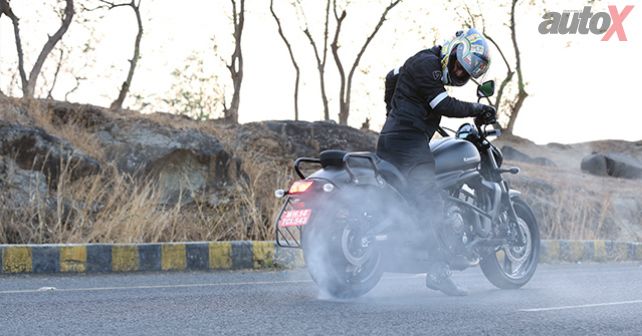 Kawasaki has launched various motorcycles based on this 650cc engine, right from the street naked Z650 to the adventure tourer Versys 650 and now a cruiser in the Vulcan S. This itself speaks volumes for the versatility and reliability of the motor. Add to that the comfort and the ride-handling balance, and what you get is a wholesome package. But there’s more to success than just a good product. The Vulcan’s biggest hurdle to success will be the Harley Davidson Street 750, and the engagement that the Harley brand has in the market. No doubt that the product has potential, but it’ll need a very aggressive marketing strategy to counter the allure of American metal. Like a marketing guru once said, ‘Content is King but engagement is Queen, and the lady rules the house!’

X-factor: The Vulcan S is further proof of how well Kawasaki understands the middle-weight motorcycle segment.