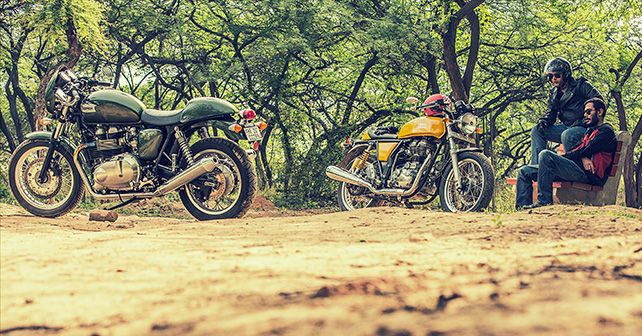 We ride the only proper Café Racers available in India. Both are entwined with rich British heritage, but are miles apart in terms of engineering.

At the 2012 Auto Expo, we were introduced to the Royal Enfield Café Racer. We knew it was heading our way, and we were all excited beyond belief that Royal Enfield was finally upping its game and brining us a truly modern motorcycle. But, before that, they launched the Royal Enfield Thunderbird 500 that made the RE fraternity swoon. Yes, it was a huge breakthrough for the company, but the hysteria for the Café Racer was far greater. When we finally were invited to Goa for the launch of the Café Racer, christened as the Royal Enfield Continental GT, I remember discussing with other automotive journalists how phenomenal the bike was.

From then on, the Indian market has never been the same – and it’s not because RE launched the Café Racer, but because we’ve seen an onslaught of foreign manufacturers entering the Indian market with very high quality products. One of those manufacturers is none other than the legendary British bike maker, Triumph – and they happened to bring with them a beautiful Café Racer called the Thruxton. 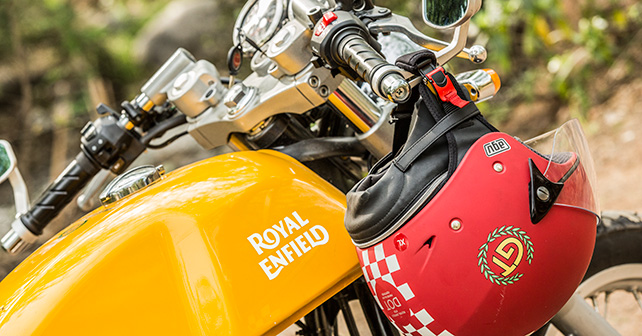 Now, just to make it clear I’ve always been a Royal Enfield fan – I enjoy all of their bikes. Yes, mechanically and technologically, they may not be able to stand up to other motorcycles in the same price bracket. But they really can take you anywhere in stock form. Each one can take a massive beating and look good at the same time. This is how RE has managed to create such a strong brand name for itself.

But here’s my problem. Over the last couple of years we’ve tested some amazing machines, and our expectations from bikes 350cc and above have increased. RE claims to be the oldest motorcycle manufacturer in continuous production on the planet, but manufacturers such as Triumph have serious depth in their heritage. More than that, though, they’ve really excelled when it comes to engineering and keeping pace with technological advancement. RE, however, is still lagging behind in this respect – and this bothers me.

But, then, when you have bikes like these to play with, your troubles don’t last very long. And so, there we were on a beautiful spring morning in Delhi with the Continental GT and Triumph Truxton – the only two proper Café Racers in the country. Both bikes look beautiful up close, but the difference in the quality of components is clearly evident. The Thruxton, though, is `5 lakhs more expensive – so you would expect it to be engineered to pure perfection. It has an 865cc engine pumping out 59bhp and 61Nm of torque. The engine doesn’t rev very hard, but it’s got a wide power band that allows you to feel a solid punch of acceleration from as low as 1,800rpm in third gear. 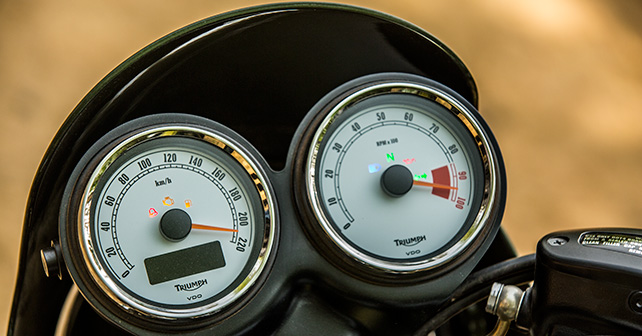 With that kind of power, it’s great fun to ride in the city. Moreover, it handles like a dream. It retains its classic British heritage and certainly looks pretty in green. It’s a proper Café Racer, and makes you feel like a true blue speed-junkie when you’re tearing down the city streets. You can enter curves at a quick pace and feel comfortable while doing so. The bike remains composed, even at high speeds. The overall refinement levels are fantastic, and this allows for a comfortable ride. But the bike is a little heavy, which makes it stressful to ride in city traffic – as there’s a lot of weight on your wrists because of the riding position.

The Continental GT, on the other hand, gets a comparatively feeble 535cc engine with 29bhp and 44Nm of torque. It vibrates much more, but it’s not something that most riders will really be troubled by. The riding position in the Continental GT is a little bit less aggressive and the bike weighs 44 kilograms less, which makes it easier to handle in heavy traffic – but it’s still taxing. On the plus side, the RE looks exceptionally beautiful too. And when you ride it you feel just as good as you would on any other Café Racer – minus the bursts of adrenaline you get from faster acceleration. But even though it’s got a smaller engine it does pick up speed nicely indeed. The best part of the RE, though, is the way it handles. Riding the Continental GT is super fun – the bike handles just as well as the Thruxton, thanks to its wonderful chassis.

So, the important thing is that you’re pretty content weather you’re on a Continental GT or a Thruxton – because anyone who buys a Café Racer in India is buying it purely as a lifestyle statement. Both bikes fall into a niche within a niche – because only a very small minority of customers can afford high priced motorcycles, and only a very small minority of those would even consider a Café Racer.

We all know that demand for high quality and expensive motorcycles in the country is just beginning to rise. So far, RE has been able to get away with low quality bikes – but things are slowly changing.

The Continental GT is a much more accessible Café Racer. Even though it doesn’t even come close to the Thruxton’s quality, it still demands attention. It’s also been received quite well in international markets such as the UK and the US. The Triumph Thruxton, though, is undoubtedly the reigning champ of Café Racers in India – but, as we found out on that wonderful spring morning, both bikes are very enjoyable to ride and the small handful of customers who buy these two unique machines will surely enjoy them for what they are. 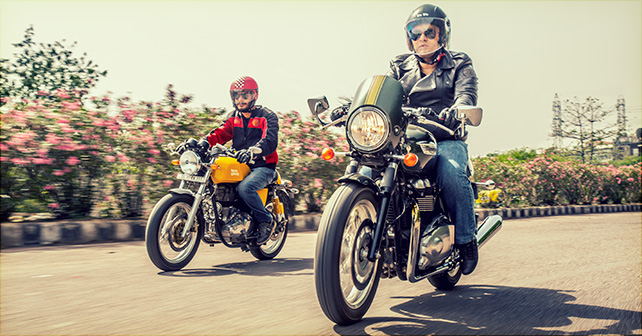