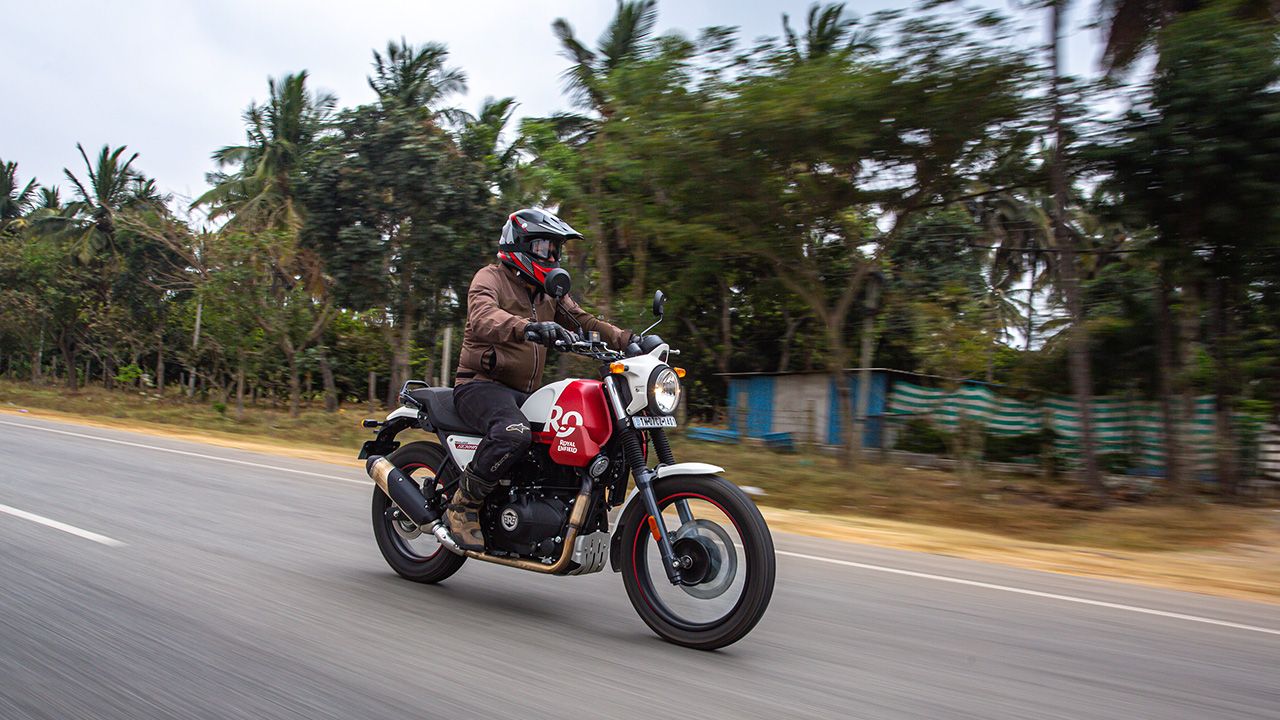 https://www.autox.com/new-bikes/royal-enfield/himalayan/The Scram 411 is Royal Enfield’s attempt at turning its hardcore Himalayan ADV into a friendly and more road-focused motorcycle. But, will it work?

The Royal Enfield Himalayan needs no introduction. Since its market launch in 2016, it has become the go-to entry-level ADV for the masses. As good as the Himalayan is, though, it’s not without a catch. You see, the Himalayan is a little too adventure-focused, a little too hardcore, which means that it’s not for everyone – not everybody wants to explore the unknown, and not everyone has time to ride to the high passes of the Himalayas. In fact, most bikers in this category – no matter how adventurous they claim to be – eventually end up riding their bikes within the city and would only occasionally head to off-road trails to have some Instagram-worthy fun.

Royal Enfield has now realized this – it knows that the Himalayan’s image is hurting its chances amongst city dwellers. So, to address the issue, the company has come up with a new iteration of its ADV in the shape and form of the Scram 411. With this more road-focused version of the Himalayan, Royal Enfield wants to woo the urban youth into its adventure fold. But the question is – will this formula work? 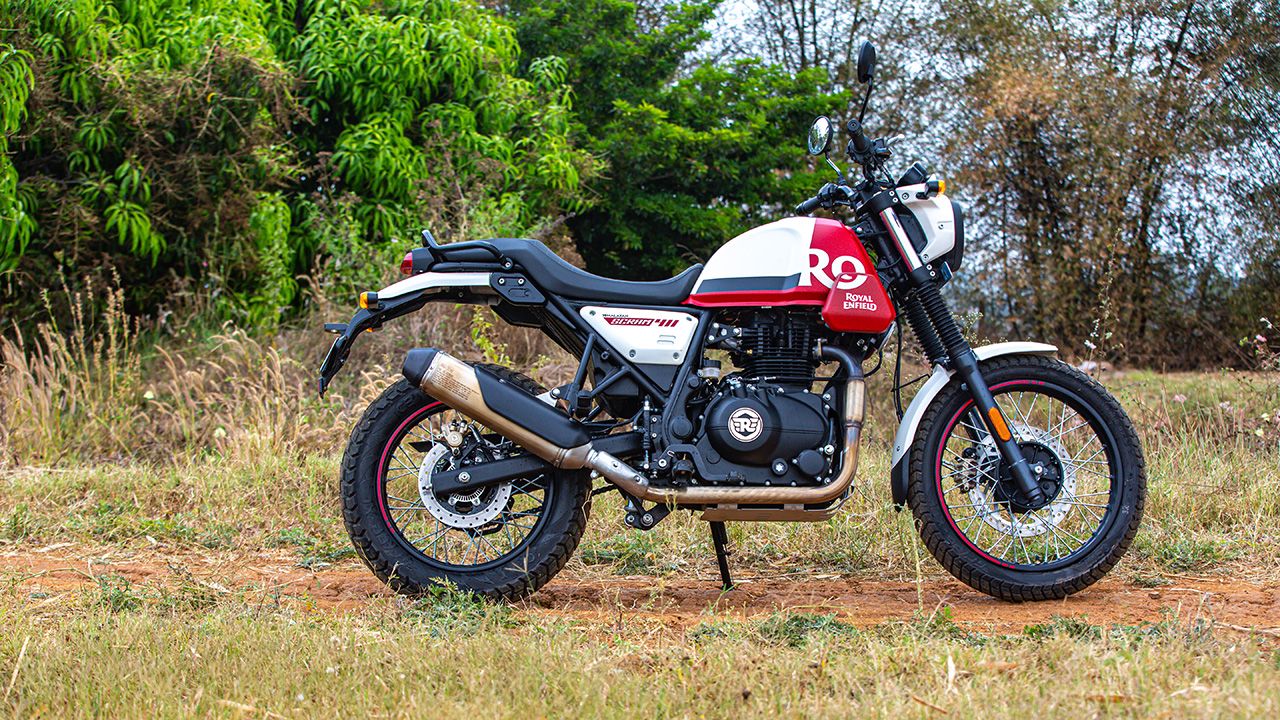 One look at the Scram 411 and you can quickly tell that it’s nothing but a polished and less hardcore version of the Himalayan. You’ll find the same split cradle frame, LS410 engine, 15-litre fuel tank, a familiar round headlamp unit (no LED headlamps still), and other similar bits and bobs of its ADV sibling here, but there are some crucial updates. Gone are the windscreen, heavy metal protection around the tank, and those massive grab rails. And in their place come the new bits, such as a cast metal frame around the headlamp, small tank panels, a new single-piece seat, and a re-profiled rear-end design with smaller grab rails. Also, the number plate and indicators are mounted differently here in comparison to the Himalayan.

The Scram 411 looks less utilitarian, which is mainly because of its revised geometry. The handlebar and front forks sit lower, courtesy of its revised suspension setup and a smaller 19-inch front wheel as opposed to the 21-inch of the Himalayan. The front tyre is a size wider too, giving the Scram a meatier stance. The rear tyre is of the same size as that of the Himalayan, and the tread pattern of the Ceat Gripp XL rubber (on both tyres) is also the same as the Himalayan.

The quality and fit-and-finish are acceptable, if not the best, which means that it’s just like the Himalayan. Surprisingly, the instrument cluster is lifted from the Meteor instead of the Himalayan, meaning the Scram loses out on the latter’s tachometer. What’s more, ABS is non-switchable. According to Royal Enfield, that feature has been skipped because the Scram is more of a road bike. But then, on the contrary, it doesn’t get alloy wheels – even as an option – and that makes me think that's it's so road-focussed after all. As we’ve experienced with the Himalayan in the past, its tube-type tyres are a major pain in the backside when you’ve to fix a puncture. So, for its road-going version, it’d have made more sense to offer alloys.

On the whole, I quite like the design of Scram 411. It doesn’t look as elemental or bare-bones as the Himalayan, and on top of that, with seven funky colour schemes on offer, it looks youthful and more upmarket. 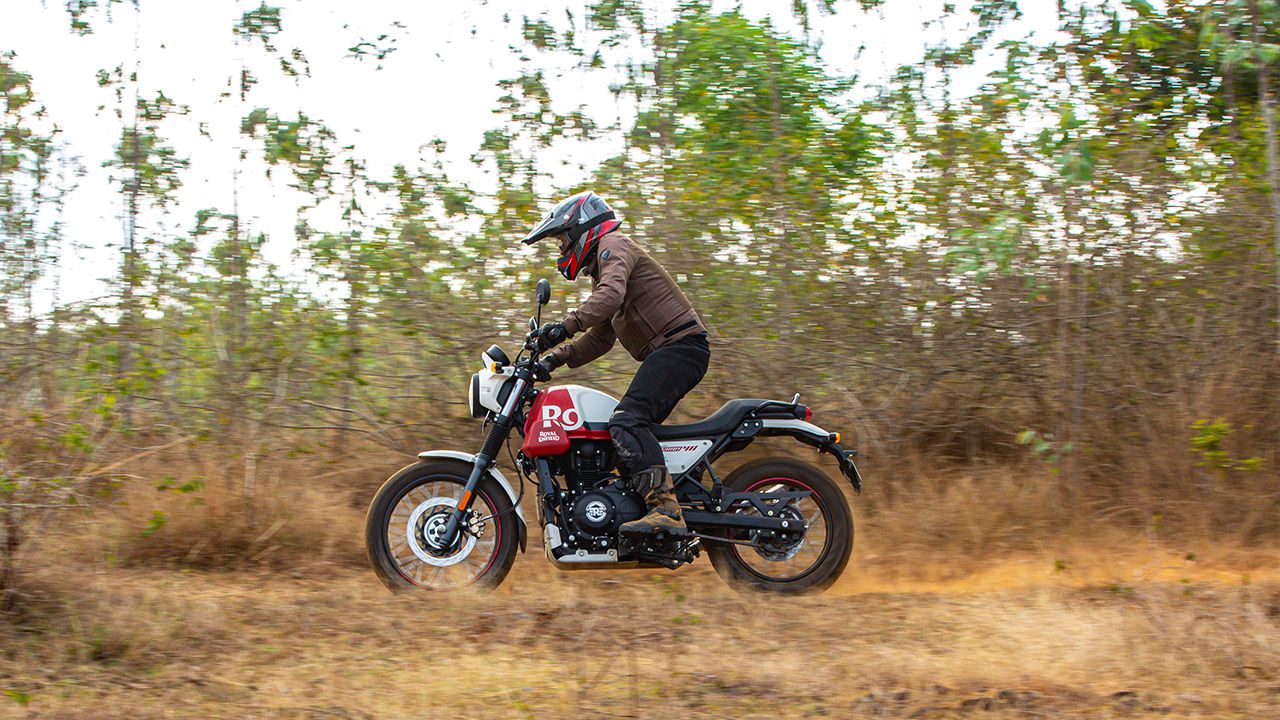 The Scram 411 is powered by the same 411cc single-cylinder mill as the Himalayan, which produces the same power output and torque and comes paired to the same 5-speed transmission – even the gear ratios are unchanged. Consequently, you end up with a motorcycle that feels familiar right from the word go. Just like the Himalayan, the LS410 motor in the Scram 411 offers decent poke at low-revs and then delivers all of its twisting force in a nonchalant, smooth, and linear manner. Royal Enfield claims 90% of the torque is available from 2,000rpm, and that’s quite evident – the Scram 411 pulls cleanly and effortlessly wherever you take it.

While it doesn’t have any kind of wind protection, you can cruise at 110km/h on highways quite effortlessly. There are mild vibrations, but nothing that you can’t live with. Push the engine a little more, and you can even do 120km/h without any real bother. However, post that mark, progress is really, really slow. You’ll hardly get to see 130km/h on the speedo, even when you’re going downhill at full throttle.

The real difference between the Scram and Himalayan lies in the ride-and-handling department. Thanks to its smaller front wheel and lowered and firmer suspension setup, the Scram is a nimbler and more agile road bike. Be it within the city or on long flowing corners, the Scram tips in more effortlessly and has a more surefooted feel. All of this, however, does come at the cost of comfort – unlike the Himalayan, which offer a plush and absorbent ride on bad roads, the Scram feels taut and jittery on broken roads. Truth be told, the Scram’s ride isn’t uncomfortable or tiring, it’s just that the Himalayan’s ride is really, really good.

Off-road, the riding experience isn’t all that different. It’s only when you encounter sharp rocks or big boulders at low speed that you miss the extra 10mm of travel at the front (190mm vs 200mm of the Himalayan) and the stability of the bigger and slimmer 21-inch wheel. That said, on fast gravelly trails, the Scram is more stable and feels more connected to the road.

Tipping the scales at 194kgs, the Scram is around 5kgs lighter than the Himalayan, but that makes hardly any difference. You do feel its weight while navigating through tight and tricky sections. However, for the most part, it’s a neutral handler and doesn’t intimidate you. The ground clearance is down to 200mm (compared to 220mm of the Himalayan), but it still won’t scrape its belly during light or even hardcore off-roading. 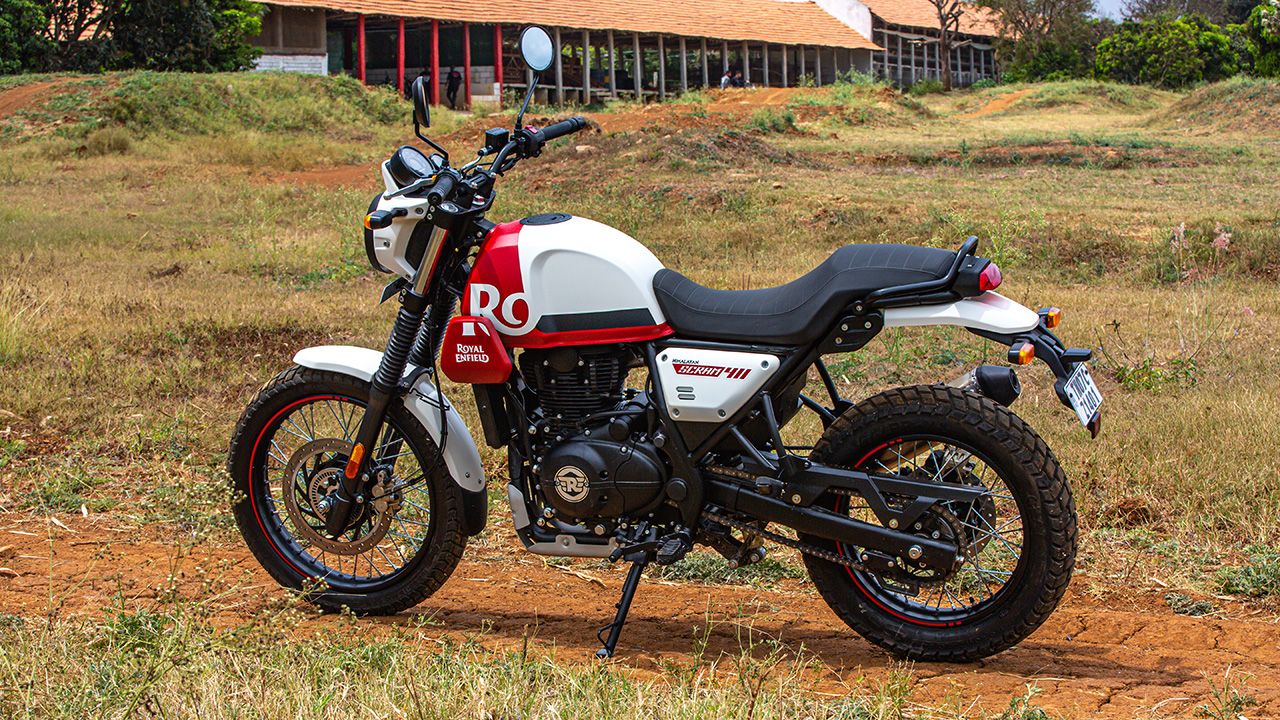 When you think about it, the Scram 411 makes more sense than the Himalayan – at least, to me. It’s a more civilised version of its ADV sibling, but it’s still hardcore and tough as nails. You can take it off-roading, and it’ll happily take the beating, but at the same time, it won’t look out-of-place or too adventure-focused during daily commutes. Not to mention, it’s more fun and agile to ride within the confines of urban environments. The Scram 411, then, hits the sweet spot between an ADV and a street motorcycle. Some may say that it belongs neither here nor there, but for a majority of riders, the Scram 411 has got the best of the two worlds.

X-Factor:  The Scram 411 hits the sweet spot between an ADV & street motorcycle. 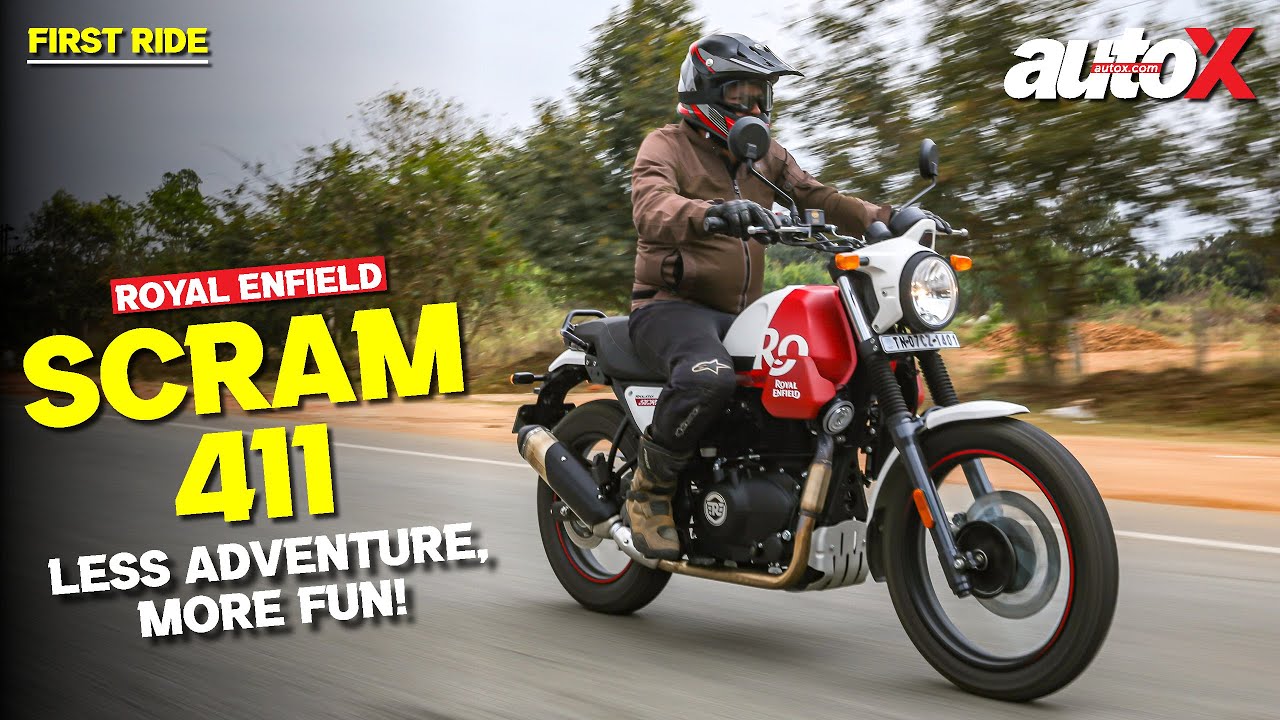